Even the beautiful people want to prevent aerial spraying 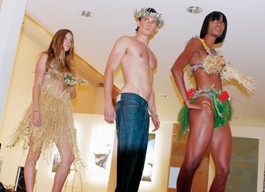 There is nothing about the words “aerial spraying” that soothes the mind, and nothing about the term “pest eradication” that speaks to environmentally friendly farming practices. Put together, the terms “aerial spraying and pest eradication” become even less benign. The light brown apple moth has been well-covered within these pages, and many of us are aware that forced aerial spraying has already taken place in both Monterey and Santa Cruz counties, that hundreds of people reported health problems after the spraying occurred and that the dangers of this moth are no more well-documented than the dangers of the pesticides rained down upon us. By mid-August, spraying is slated to begin in Marin County as well as the San Francisco Bay Area. Sonoma and Napa will no doubt be next in line, as this multimillion-dollar spraying campaign works its way across California.

The moment we stop acting is the moment it becomes too late to manifest change. For this reason, when I heard about Chic for a Cause: Stop the Spray, a fashion fundraiser for StopTheSpray.org, I decided to drive down to the city for a night of light brown apple moth awareness, live music, fresh fruit, funky fashion and raw chocolate delicacies. The event, hosted and organized by Annette Richmond, owner or the Bay Area fashion PR firm Avant Garde Public Relations, took place at Muse Studios, a bright, open space located in the Tenderloin district. In only a month and a half of planning, which is about how long ago Richmond first learned about the moth, she managed to pull together a fantastic event, attended by over a hundred people.

While waiting for the fashion show to begin, I ate and ogled all sorts of wonderful donated products available through silent auction—I was particularly taken with a Be Sweet handbag that was way out of my price range. The band Diamond Ortiz played tunes, people mingled and Stop the Spray Marin showed up with educational materials and a friendly group of volunteers. I chatted with nature photographer Jocelyn Knight, who has been frantically framing in preparation for this one-night event. Her nature shots of Marin County adorn the walls featuring coyotes, butterflies, flowers and other living things that will suffer from the spray.

This event was held by people who are donating their products, their efforts and their time to raise money and awareness about the proposed spraying. I overheard things like, “If they spray, I’m leaving the country” and “What is this about? Who’s spraying what?” I spoke with violinist Wallace Harvey, on hand to offer musical accompaniment to Laurie Tumer’s Glowing Evidence series, in which she documents the way pesticides travel and persist on skin and clothing. Harvey said that he’s feeling a little fatalistic about it at this point, but was here to support the resistance anyway.

Lisa Chipkin, co-coordinator for Stop the Spray Marin, has been working on this issue full-time ever since hearing about it. She cautioned that the governor’s temporary hold on aerial spraying should not be believed. This is just a way to put people to sleep, she said, to make them relax and think the threat is over. The threat is not over, she warned, and we must stay alert and persistent. Already there are lawsuits in the works in both Monterey and Santa Cruz counties, and with the amount of passion I saw in this single studio space, I have no doubt that these NorCal residents will not hesitate to do the same.

Once the models began walking, the crowd settled down. The fashion show started with botanical couture by Theron Nelson Designs. Nelson happened to be standing next to me, still holding a pair of garden clippers in one hand. He’d been working since the day before to make outfits crafted entirely out of leaves, flowers and dried grasses. While a bikini made out of straw and leaves cannot be pulled off by just anyone, the models did justice to his work, and though the ensuing organic-wear was not quite as exciting as Theron’s more minimalist style, the mood was properly set.

Richmond said that when she heard about the spraying, she knew she had to do something. Because her comfort zone is fashion, she decided to focus her energies on putting together an event that she could feel excited by. With this event alone, she managed to raise over $1,000 for the cause, and she’s not stopping there. Because some of the donated items available for auction did not sell (unfortunately, my handbag did), Richmond’s next goal is to start Stop the Spray eBay. Keep your eyes open for a great opportunity to both support the cause and hook yourself up with some amazing eco-products.

Next ArticleThe Dept. of Defense Wants Us?