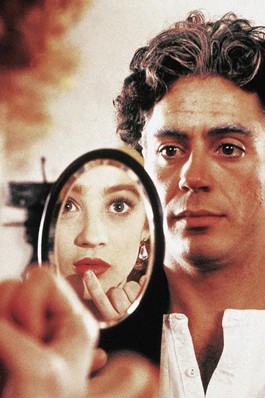 Home for the Hols

Bill Douglas Trilogy‘ An alternative title to the films collected in this set—My Childhood (1972), My Ain Folk (1973) and My Way Home (1978)—could be How Bleak Was My Valley. In these short films, Douglas follows the adventures of his surrogate Jamie (Stephen Archibald, a highly talented nonprofessional who died before he was 40). Like Douglas, Jamie grows up in a Scottish coal-mining town, the illegitimate son of a woman who lost her mind, living with two grandmothers (one inert, the other vicious) before living in an orphanage.

The almost mute boy wants to be an artist of some sort. He is drawn to cinema, in the form of a 1945 musical with banjolelist George Formby or a lone splash of Technicolor, with Lassie gazing at the Sierra Nevada, which are impersonating the Scottish Highlands. As an impressionist study, Douglas’ trilogy is something similar to Terence Davies’ Distant Voices, Still Lives, but his films are even more tough, leavened with moments of Vigo-like dreaminess and darkened by Lynchian nightmares.

English subtitles and copies of Douglas’ poetic scripts would have been useful, but the extras do include a documentary, Bill Douglas: Intent on Getting the Image, which describes the director’s short life and curtailed career. Douglas’ only feature, Comrades, a working-class epic about the Tolpuddle Martyrs, is not yet available on DVD. Key among the interviewees is Peter George, Douglas’ collaborator and longtime companion; they weren’t lovers, apparently, despite the male-identified imagery in the last and best of these three films.

‘Chaplin: 15th Anniversary Edition’ Richard Attenborough’s 1992 biopic is thoroughly knowledgeable about the sometimes enigmatic, sometimes self-pitying cinema genius Charlie Chaplin. But the movie’s old-fashioned insistence on the secret to the man—that maddening mainstream film tendency to try to sum up a life in one sentence—finds no there there. Chaplin is one of the most honorable and well-researched Hollywood biopics and, curiously, also one of the flattest.

In the title role, Robert Downey Jr. gives it his all. The premise is that in an old-age home in Switzerland, Chaplin is interviewed by a reporter (Anthony Hopkins) who asks probing, unlikely questions. You get distracted in this interrogation by some of the interesting actresses around in the flashbacks, playing the women in Chaplin’s life and career: Marisa Tomei as Mabel Normand, Moira Kelley as both Hetty Kelly and Oona O’Neill, and Diane Lane as Paulette Goddard. Dan Aykroyd steals the movie, having just the right amount of salt and grit to be Mack Sennett, and Geraldine Chaplin plays her own grandmother in an affecting madhouse scene.

This oddly titled special edition (shouldn’t that be 16th anniversary?) includes featurettes about the film and Chaplin’s career (most interestingly, Attenborough suggests that the reporter character was added late in the game and “buggered” the movie) and a short home movie taken by Alistair Cooke in 1933 showing Chaplin clowning aboard his yacht.

‘Thomas Kinkade’s Christmas Cottage’Back in the 1970s, Michael Campus, the director of this movie, put my life in peril. His film The Passover Plot played at the Pacific Beverly Hills Theater where I worked. We were threatened by the usual fundamentalist crackpots, ready to bomb that grand edifice if we didn’t ditch the blasphemous film suggesting that Jesus (soft-core porn czar Zalman King!) only slumbered on the cross rather than dying, having been slipped a Mickey in the famous vinegar-soaked sponge. I could have died because of his very bad movie! And now Campus is trying to kill me again, this time with boredom.

In only the most Hallmarkian terms, this purports to be the story of how Morgan Hill’s Thomas Kinkade began his career, painting his sinisterly glowing houses of horrors. Apparently, Jared Padalecki’s Kinkade learned to paint good in order to help his mom (Marcia Gay Harden) keep her house. As a young man, he was mentored by real-life artist Glen Wessler (Peter O’Toole, in an act of sunset-years prostitution equivalent to Laurence Olivier taking a role in The Betsy). Creating a false dichotomy between art that critics like and that which ordinary people enjoy, O’Toole coughs up lines like “A mural of Placerville! It’s your chance to illuminate what you love.”

Includes commentary tracks, deleted scenes and “Home for Christmas: A Conversation with Thomas Kinkade,” 10 minutes of the artist arguing for his art. Apparently, the reason why his houses appeal is that “the lights are always on.” It’s worked for Motel 6.