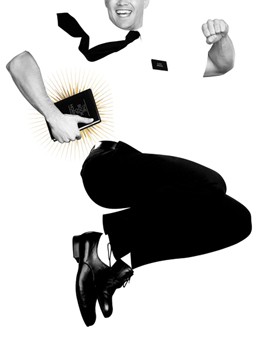 It’s hard to decide what’s more miraculous—that a big-budget Broadway musical titled The Book of Mormon could become the hottest ticket in New York City, that it would go on to win the Tony award for best new musical, or that its original cast recording would instantly hit No. 3 on the Billboard charts.

It’s the first time since 1969—when Hair ruled the charts for 13 weeks—that a Broadway cast album has appeared in the Top 10. Though Hair boasted its share of provocative lyrics, its hippy-dippy love-in was a kindergarten class compared to Book of Mormon, with songs like “Hasa Diga Eebowai” (the title turns out to be a Ugandan phrase meaning “Fuck you, God!”) and “Joseph Smith American Moses,” retelling the story of Mormonism though an African villager’s eyes, complete with references to warlords, AIDS, clitoral circumcision and making babies (“Fuck your woman! – Fuck your man! – It is all part of God’s plan!”).

The ingeniously captivating story follows two mismatched teenage Mormon missionaries sent to a remote village in Africa. There, in Uganda, their faith is sorely tested—and one of them accidentally does end up changing the world. Elder Price, played with earnest sincerity (and a killer voice) by Andrew Rannells, is both naive and fearless, certain he was born for missionary greatness.

Elder Cunningham (a delightfully awkward Josh Gad) is happy just to be his partner’s sidekick until circumstances force him to dig deep and man up—”Man Up” being the title of his most hilarious solo (“I’m taking the reins – I’m crossing the bear – And just like Jesus – I’m growing a pair!”).

Conceived and written by Trey Parker and Matt Stone (South Park) with Robert Lopez (Avenue Q), The Book of Mormon is salty and sweet—part satire, part coming-of-age story. It is also the most four-letter-word-packed musical in Broadway history; the original cast recording comes with a strongly worded parental advisory.

Far more surprising is how multilayered this musical is—nailing some genuinely moving moments in and around all the pointed puncturing of sacred cows—and how uniformly good the songs are. The sneaky “Baptize Me,” in which Cunningham baptizes the lovely Nabulungi (Nikki M. James), may rank as the sexiest song about salvation ever written, and Rannells’ giddy pro-faith anthem “I Believe” is both funny and exhilarating.

Only the makers of South Park could deliver a musical as outrageous, silly and sinfully smart as The Book of Mormon. You may go to Hell for loving it, but you’ll definitely go there singing a happy tune.

‘The Book of Mormon’ original cast recording is in stores now.