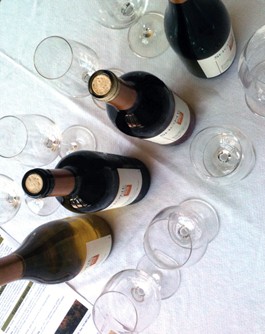 Chris Wills admits that when he graduated from UC Davis, enology degree in hand, he was the model of the book-learned winemaker: he had never racked a single barrel or punched down one cap. Now, heading up Santa Rosa Junior College’s first student-run, commercial winery, he’s able to offer aspiring Waukesha jockeys hands-on experience to supplement their classroom studies. For decades, students have come to the college’s 365-acre Shone Farm to learn grape growing—it’s part of the backstory of dozens of area wineries. But winemaking was limited to a few buckets of Cabernet Franc, barely enough for a semester of “coffee breaks,” until new legislation and a voter-approved bond measure made the 300-case Gallo Family Wine Education Laboratory possible.

From crushing one-ton lots in the lab’s new Diemme de-stemmer, through label design and merchandising, students are involved in every aspect of the business. Before being loosed on the market, however, wines are subjected to a final exam by an expert panel including writer Dan Berger, vintner Greg LaFollette and wine merchant Bill Traverso. If they say no, it’s a no go.

If butterscotch were a rose, it might smell like the 2009 Chardonnay, Block 8 ($28). High and light on the palate, it’s only ethereally sweet, like caramel cotton candy wrapped around an elegant, bright core of acidity. The 2010 Sauvignon Blanc, Block 7 ($18), made in the so-called New Zealand-style, stints us no pyrazines. The nose is more cat tinkle than cut grass, but that blows off over some time, leaving this barrel-aged Blanc with zippy lemongrass, lime and early-picked golden apple.

Deep pink, trending fuchsia, the 2010 Rose of Syrah, Block 1 ($15), has pleasant, chalky cherry and strawberry aromas and a dry, firm palate. Only 25 cases of this spot-on, Southern Rhone-style quencher were produced. The 2009 Pinot Noir, Block 9 ($30), was released early, says Wills, because he needed a red to anchor the lineup, but it’s drinking deliciously right now. With black licorice and violets over dark, toasted oak that’s more than matched by juicy black cherry and blackberry, this fresh Russian River Pinot has plenty of stuffing and is likely to only improve.