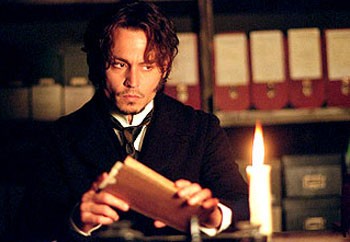 ‘From Hell’ offers atmospheric but vague retelling of Ripper legend

JOKERS WHO SAW the sketch film Amazon Women on the Moon already know the identity of Jack the Ripper: the Loch Ness monster did it. However, From Hell re-solves the case, or tries to. It’s a confusing thriller, directed irresolutely by the Hughes Brothers, and based on the Alan Moore/Eddie Campbell graphic novel.

It has its pleasures, thanks to very good CGI and Prague locations: Victorian London under bloody skies, with computer-animated seagulls the size of pterodactyls flapping around St. Paul’s.

No fog shrouds these Whitechapel streets: it’s a bad street party, swarming with violent drunks, echoing with the sounds of bodily fluids slopping against the cobblestones. It’s crowded with houseless people–in one all-night kip the whores are roped together, sleeping sitting up on benches.

In the film’s most lyrical moment, detective Johnny Depp makes himself a fancy absinthe and laudanum cocktail (never mix, never worry) while lounging in his bath trying to hallucinate up some clues.

At this point Depp’s a genre, not an actor. To get to Lugosihood, where he seems to be heading (there are worse destinations), he’s going to need some rich, chewy dialogue–that wounded look is wearing thin. Depp’s Detective Adeline is hauled out of an opium den to solve the killings of prostitutes in London’s red-light district. He romances a streetwalker (Heather Graham, miscast) while penetrating the ghastly secrets of the killing.

While From Hell solves the murders and deals out a fitting punishment for the beast, the motive is obscured by vague direction. A supernatural element is a fitting cap for the story, but what exactly was achieved by the serial killings is vague, right when it needs to be clear. It’s as if the key to this movie doesn’t fit.

Bob Clark’s 1978 Murder by Decree, which pitted Christopher Plummer’s Sherlock Holmes against the Ripper, confounded most who saw it. Yet it still had a clearer explanation of how Masonic ritual murder might have been enacted on the Whitechapel prostitutes. It’s been 20 years since I’ve seen Murder by Decree but I can still remember the sinister grace with which Plummer pantomimed the evisceration of the Three Ruffians–Jubela, Jubelo, and Jubelum–the mythic killers of the Grand Master of the Masons. (I realize this is all just a conspiracy-nut’s blood libel, and that the Masons are about as menacing as the Fraternal Order of the Eagles.)

Also, From Hell‘s gambit around the final murder would have been more dramatic if it hadn’t been used in 1980’s fondly remembered Ripper movie Time after Time, with David Warner as Jack.

Katrin Cartlidge and Susan Lynch, two strongly featured and impressively brusque actresses, play a pair of the Ripper’s choices, but they’re squandered: there’s never a sense of the pathos or the texture of their lives.

The Hugheses go for the squalor every time.

From Hell is a noisy, gabby movie that plays up the butchery. While the heavy mood does get in your bones, the film suffers from what Dr. Gull (Ian Holm, splendid as always) calls “the surgeon’s malady: a want of feeling.”