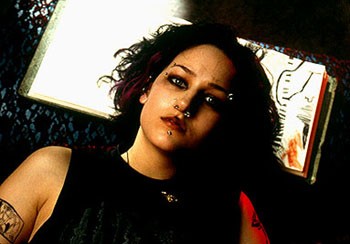 ‘My First Mister’ backs away from piquant romance

From Cary Grant and Audrey Hepburn to Nellie and Monsieur Arnaud, movies have a long tradition of relationships between older men and younger women. But a post-Lewinsky terror of such stories still prevails. Just when the comedy My First Mister starts to get interesting, it hightails away in panic, turning a piquant subject edgeless and soppy.

I understand that young girls sometimes aren’t sure if they’re looking for a father or a boyfriend, and that an unprincipled older man might take advantage of their confusion. Nevertheless, in a possible match-up between Leelee Sobieski and Albert Brooks, obviously it isn’t Sobieski who needs looking-out for.

Christine Lahti’s film posits that Sobieski’s Jennifer is an innocent 17-year-old from L.A.–no matter how serious a case of tackle-box face she exhibits from multiple piercings. Sobieski looks like what the New Ageists call “an old soul.” Gothed-out and mad about cemeteries, she radiates the most potent youthful wickedness since Louise Brooks. It’s a measure of how wrong My First Mister goes in its second half that I can’t recommend the movie even for her performance.

Looking for a job, Jennifer settles on an unlikely position at an upscale men’s haberdashery run by 49-year-old Randall (Albert Brooks), who sportily decides to hire Jennifer on the condition that she pull out her facial jewelry. Afterward, Jennifer becomes a mostly tame employee who tries to warm up the very stodgy man. At the point where she seems to have succeeded, the film veers into heartbreak.

Lahti loves L.A., and this helps, as in passing scenes of a group of mariachis entertaining some Hasidic Jews near Olivera Street, or of a man installing 6-foot-high wooden French fries into a Playa del Ray hamburger-joint billboard. And in the beginning, the script by Jill Franklyn, a former writer for Seinfeld, is sweet and tart, suggesting–as Seinfeld always did–that maybe what we look for in a partner is someone whose fears sync up with ours.

As divine as Seinfeld was, it was a sitcom. And in My First Mister, Jennifer’s parents are sitcom wackos: Carol Kane playing Carol Kane; John Goodman in a few terrible bits as her father, a ’60s-inebriated loafer.

As for Brooks, he’s uproarious at first, dry and dignified, lecturing Jennifer on overuse of the word fuck by telling her about the boy who cried wolf. But even Brooks ends up playing straight the kind of material that he used to deride.

Once upon a time, Brooks urged budding comedians to find a disease they could adopt for a telethon. Now he’s the one suffering through a bad case of Hollywood Movie Disease.