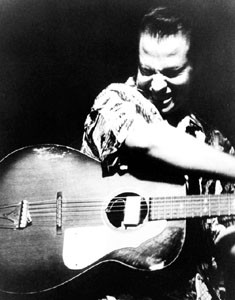 A trio of alt.country gems

Any alt.country fans worth their faded No Depression T-shirt have a stack of CDs in their library from the good folks at Bloodshot Records, the Chicago-based home to some of the hottest–and weirdest–roots music acts (including Split Lip Rayfield, Neko Case, and the Waco Brothers). This trio of new releases will set you back 45 or 50 bucks and they’re well worth a piece of your hard-earned paycheck. North Bay hillbilly hounds know that Wayne “The Train” Hancock, a Texas-born country swing artist imbued with the spirits of Hank Williams and Bob Wills, is a helluva good rockin’ daddy with one of the most distinctive voices in roots music. The 14 tracks on A Town Blues, a dozen originals and covers of Jimmy Rogers and Fats Waller recorded in Austin and produced by Lloyd Maines (Wilco, Joe Ely), is a swingin’ collection of whacked-out hillbilly barn burners, dusty desert ballads, and dance floor warmers worthy of Hank Sr. It’s as Hancock likes to say: “If you like music that moves and the trash on the radio can’t satisfy your wanderlust,
then try this CD and burn a thousand miles.”

Wanderlust and sweet abandon are what singer Kelly Hogan is all about. Her sluttier label mate Neko Case gets more of the media attention, but Hogan’s angelic, country-drenched vocals and restrained approach haven’t been lost on the critics. The Washington Post recently gushed that Hogan “sings with persuasive passion.” Billboard branded Hogan “one of the most irresistible singers to appear in some time.” And the Chicago Tribune opined that Hogan “has every bit of the vocal power of a Whitney or an Alanis; the difference is she knows how to sculpt a song and build a moment.”

Catch her live on Nov. 10 at the Bottom of the Hill in San Francisco.

As for Robbie Fulks, he ain’t exactly a household name but listeners of KRSH and KRCB radio know that this is one guy who knows what the heart of country music is all about. On his wryly titled new CD 13 Hillbilly Giants (recorded by engineer Steve Albini of Nirvana fame), Fulks delivers a baker’s dozen of cool country covers–novelty tunes, weepers, story songs, and rave-ups. All are obscure songs by famous country artists like Dolly Parton and Porter Wagoner or should-be-famous songs by obscure artists like the Carlisles. Fulks–the creator of such latter-day honky-tonk classics as “The Buck Starts Here” and “She Took a Lot of Pills and Died”–sounds like Dwight Yoakam without the
pop pretensions.

The publicity folks at Bloodshot call Fulks’ latest “an excellent bromide” for what passes as country music these days. Drink liberally from this jug.

Move over, Supernatural, make way for a spiritual immersion. Long before his rebirth as a multi-Grammy Award-winning MTV star who built a new audience by linking up with the likes of pop star Rob Thomas of Matchbox 20 and rapper Wyclef Jean, guitarist Carlos Santana startled fans by recording a pair of pioneering jazz-fusion albums, 1972’s Love Devotion Surrender–on which then Devadip Carlos Santana joined forces with fellow Sri Chimnoy devotee and guitar heavyweight Mahavishnu John McLaughlin–and 1974’s Illuminations, a free-jazz exploration of John Coltrane themes that was the first Santana album not to go gold in the United States. Now bassist/alchemist/producer Bill Laswell has gone into the studio to create Carlos Santana: Divine Light, a Reconstruction and Mix Translation (Epic/Legacy), which reinvents nine tracks from those recordings through studio wizardry. The CD is the follow-up to Laswell’s similar 1998 remix project Panthalassa: The Music of Miles Davis 1969-1974 (Columbia). The new CD is a nice way to revisit some of the most adventurous and most maligned work by this Marin musician who at the time had the courage to put spiritual values and stream-of-consciousness artistry ahead of mainstream commercial success. Such a rarity today.