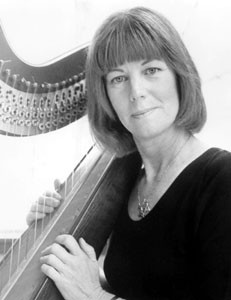 Harpist works for peace in the Balkans

Georgia Kelly learned about war and peace the hard way. She lived in Yugoslavia in 1991 when war broke out and literally tore that Balkan nation apart. Kelly’s experiences during that time–which included a massive U.S. air campaign–prompted her to begin studying what she describes as “the cycles that we seem doomed to repeat, unless we learn the lessons of history and actively create alternatives.”

Best known as a composer and harpist, Kelly also is president and executive director of the Praxis Peace Institute in Sonoma, which she founded last year. These days, she spends most of her time nurturing her new nonprofit, with breaks to drink Earl Grey tea, eat Belgian chocolate, and feed peanuts to the blue jays that visit her back deck and, on occasion, her den. “The point of Praxis is to identify conditions that lead to war and conditions that lead to peace,” she says. “We ask questions that are not being asked, expose inconsistencies between rhetoric and action, and link spiritual consciousness with responsible citizenship.”

Praxis offers many ways to prepare for responsible citizenship, through forums, workshops, and local and international conferences. These events bring together leading facilitators and thinkers in conflict resolution, psychology, sociology, political science, economics, history, philosophy, religion, feminist studies, and the arts and sciences.

The next Praxis event, scheduled for Oct. 28, will be a gourmet dinner in Oakville with a talk on the Collective Shadow.

In August, Sebastopol Mayor Larry Robinson, a well-known activist, spoke at a Praxis luncheon. He had just returned the night before from Japan, where he attended the World Conference of Mayors for Peace. “Visiting Hiroshima, listening to survivors, and seeing the exhibits in the museum dispels the fantasy that war can be won,” he says.

The heart and soul of Praxis, and of Kelly’s work, is a biannual conference in Dubrovnik, Croatia. Topics for the next conference, set for June 4-11, 2002, include gender issues, economics, sustainability, media, and propaganda–all in the context of what furthers or hinders peace. “We’ll also learn from people who have experienced war directly,” Kelly says, “and who are now engaged in peace building.”

Stressing that “radical” means “getting to the roots,” Kelly takes every opportunity to practice political radicalism. At a reception for Roots of Peace, a group of Sonoma County vintners that replaces land mines with grape vines, she asked a State Department official, “Why hasn’t the United States signed the International Land Mines Treaty [which has been signed by 133 other nations]?” He replied that when he was a soldier in Vietnam, he was grateful for land mines. She retorted, “We had no business being in Vietnam in the first place!”

Still dumbfounded by the exchange, Kelly says, “He was trying to defend the inhumane use of land mines by invoking an illegal and unjust war. Such disconnected thinking begs for examination.” Meanwhile, U.S. ground troops sent to Afghanistan will find themselves in a country that has been described as “the world’s biggest mine field.”

Commenting on the brutal terrorist attacks of Sept. 11, Kelly says, “Our lives are rapidly changing. We must not be observers. We must have courage and speak out for clarity, for successful solutions, and for a world of cooperation, tolerance, and peace. Empathy is probably the link between spiritual consciousness and responsible citizenship–and we’re coming out of a society that’s very narcissistic.

“That’s not a judgment so much as a statement of fact. In order to be responsible citizens, we have to grow out of the narcissism that makes us consumers instead of citizens. We need to educate ourselves about the issues, discuss them with others, and become actively engaged in creating the changes we wish to see.”