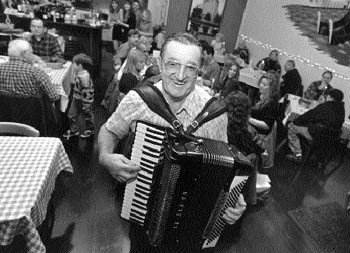 Living Well Is The Best Revenge

A Feeling of Connection: Dining out is a way of finding solace in times of tragedy. John Volpi of Volpi’s Ristorante and Speakeasy in Petaluma will even provide the soundtrack.

Living Well Is the Best Revenge

“WHAT’S THE POINT?” many of us felt after the morning of Sept 11. Why bother trying to do anything productive? How could we possibly indulge in simple pleasures–laughter, a good movie, or a favorite meal?

Well, how could we not? The point is that not to engage in these quintessential human expressions reduces our value system to something unrecognizable. To limit the space of our enjoyments, even those enjoyments that might be argued as nonessential, is to have been terrorized twice. Our collective sense of survivor guilt might lead us to a vital transformation, the next stage in the post-postmodern American Dream. Or it could perhaps more easily lead to a denial of that attitude of expansiveness, that spirit of shared enrichments that quite simply makes life worth living.

Life, liberty, and the pursuit of happiness. It’s that “pursuit of happiness” part that often gets ditched, seen as somehow too self-involved, too trivial to maintain when things become breathtakingly real and mortal. Certainly I’m talking about that “quality of life” thing. Merely drawing breath isn’t anyone’s idea of living. But I’m also suggesting something more than making sure we don’t sacrifice the full spectrum of experience in the name of fear and uncertainty.

A fundamental expression of our humanity is the seeking out of each other’s company. The handshakes, yes, the embraces that have multiplied over the past few weeks. But also, simply, that solid, silent running sense of community. It got us through the earthquake a decade ago, this coming together as if to show one another that we were all still here, still alive and ready to craft a future. The feeling of connection and mostly the vibrant feeling of social communion that happens when you’re dining in a room filled with people–these are not frivolous or unimportant concerns.

It is surely camaraderie that sustains many uncertain passages on the big river of life. Last week, we went out to eat at a small cafe. The sense of relief was palpable. We were relieved to see other people sitting and ordering dinner, raising glasses of wine, smiling over plates of freshly made food.

And the other diners, as well as the waitstaff and kitchen workers, were also relieved. They were relieved to see us. People still had appetites. Expectations were still in place. It was still important to show up and do a job. These are the deeply embedded patterns of community that keep us sane during even wildly unpredictable circumstances.

If anything, suddenly it all matters so much more. This showing up, greeting, allowing pleasure to unfurl, meeting social agreements.

As you might have guessed, the meal we enjoyed last week tasted better than it might have in a world where every act is taken for granted. That world doesn’t exist anymore. Now the very idea that a tomato could be so ripe, or that someone would greet a stranger at the next table, is priceless and incalculably reassuring.

My friend Angela, a sophisticated observer who works at a popular Bay Area restaurant, told me that it was very like after the 1989 earthquake.

“People come together. They seem to need the camaraderie that a familiar restaurant gives them.”

That is happening now. And yet a recent lunch in Palo Alto made me worry that too many people might be staying away in droves–out of fear. As sci-fi prophet Frank Herbert once observed, fear is the mind killer–the little death. Fear is that worst of adversaries. It can’t be seen, it refuses to take any clear, crisp shape.

But it haunts and taints everything it touches.

Afraid there will be no tomorrow, we stay at home, complain, and vegetate. Afraid that our money will run out, we grasp and hoard what we have. Afraid that we will appear frivolous, we stick to pious pleasures–watching TV and watching TV. Nothing is wrong with any of these things, save that they cause us to abandon our neighbors. And our identities.

The math is fairly simple; even I can do it. America–growing fearful that lightning will strike twice, and in the same way–stops flying. The results are simple and devastating. Airlines fold. Airport concessions fold. People, lots of them, lose their jobs. Every single layoff over the 10 days after the terrrorist attack carried six other jobs with it–the taxi driver, the bus person, the skycap, the parking-lot attendant, the hotel maid, and on and on.

And just as terribly we lose our freedom to move, to connect, to conduct business, to carry out long-made plans. The same can easily happen with restaurants, bakeries, cafes, butchers, farmers, shippers, wineries, field hands, truck drivers, the interlocking chain of people and businesses supporting food service.

When this is all over, this emotional blackmailing, this psychic kidnap we’re all suffering–and it will be over–we’ll be overjoyed and ready for some sensual pleasures. But will those restaurants, cafes, and bakeries still be around?

Some will. Some won’t. My point is simple. And, I hope, obvious. Now is not the time to stop going out to eat. If you fail to support the friend and neighbor who works hard as restaurateurs do, they simply will not be able to stay in business.