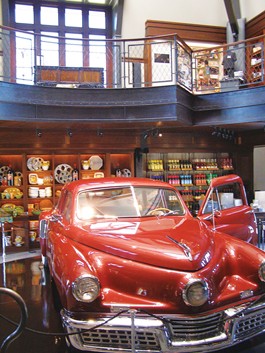 The old snipe on Napa is that it’s the Disneyland of wine, often as a setup for the purportedly more authentic Sonoma wine country. So when a Hollywood director replaced the peaked rooftops of the former Chateau Souverain with glass pyramids, says winemaker and general manager Corey Beck, neighbors were aghast. Lights! Las Vegas!

Although the skylights are shuttered at night, the winery’s fairy-tale rendition used in promotional materials does nothing to dispel this perception. Beholding this extravaganza, some might call it a “wine wonderland.” I’m told that one person does, and regularly: Francis Ford Coppola.

Candidly aiming for fun for the whole family, the parklike grounds include an amphitheater for daily performances, four huge bocce courts, a swimming pool and wine bars—with scotch on the rocks for the old school. So that this all doesn’t get out of hand—and so that every guest has a recliner in the shade—entrance to the pool is regulated. Children of a bookish nature can opt to read from the teepee lending library, while their parents get poolside wine service. (Unbreakable plastic glasses, natch.)

Inside, you can look at the heads (recently unarchived memorabilia from Apocalypse Now is on display) or swivel around to a tasting bar. Underneath a mezzanine where Vito Corleone’s desk is on display, more tasting bars. In the restaurant, heaps of roasted asparagus have just come off the Argentinean-style grill. By the time we’re on the terrace, we’re far from the hubbub, with a smashing Alexander Valley view. The only thing missing is the move-’em-out cash register endpoint. Not an oversight.

Beck reminds us that Coppola is, after all, possessing of no deficit of creativity, and everything from the view out the windows to the smorgasbord of available wine labels has been worked over in the director’s eye. Everything has a story behind it. Swimming featured prominently in summer days of Coppola’s youth, for instance; free tastes of Rosso and Bianco hark back to the simple basement wines made by Italian uncles in New York.

On this summer afternoon, everything is going smoothly, as if extras on the set were performing their roles. A cadre of women on a girl’s day out plunk down at the bar. A senior couple peruse a menu over iced teas, while a film buff intently photographs memorabilia. The very frankness with which this something-for-everyone destination winery was designed defuses any latent critic’s scoffing. And the wine? Yes, check out the Director’s Cut line of Sonoma County varietals. Nothing to snipe at.