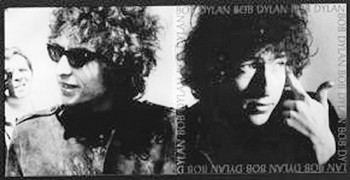 Both Sides Now: ‘Festival!’ and a new CD capture Dylan.

It’s the ultimate rock myth. A 23-year-old Bob Dylan, the high priest of the ’60s urban-folk music boom and heir-apparent to folk legend Woody Guthrie, takes the stage at the 1965 Newport Folk Festival with an electric guitar in hand, accompanied by blues-rock guitar phenom Michael Bloomfield and other members of the Paul Butterfield Blues Band. It’s the second half of Dylan’s much-anticipated set. He hadn’t attended the festival with the intention of going electric–it was the first year that amplifiers were permitted–but Dylan had been offended by the rudeness of musicologist Alan Lomax toward the Butterfield Blues Band at a workshop earlier in the afternoon. That night Dylan and his hastily assembled cohorts launch into an amphetamine- paced version of “Maggie’s Farm,” the defiant anthem from Bringing It All Back Home, Dylan’s latest album at the time.

Chaos erupts in the darkened outdoor theater. The purists in the crowd boo. Pete Seeger, the lanky dean of the folk-revivalists, grabs an ax and tries to cut the cables from the soundboard. (He now denies this.) Or at least that’s how the myth goes.

After a frenetic three-song set that also included the then-unreleased “Like a Rolling Stone” and “It Takes a Lot to Laugh, It Takes a Train to Cry,” Dylan abruptly mutters, “Let’s go, man, that’s all.”

In the crackle of the electrified maelstrom, modern rock is born.

The exact details are shrouded in mist, depending on whose version you believe of the events that transpired on that hot Rhode Island night. In his authoritative book Turn! Turn! Turn!: The ’60s Folk-Rock Revolution, San Francisco author Richie Unterberger likens the flap surrounding Dylan’s landmark performance to the plot of the classic Akira Kurosawa film Rashomon, in which four characters give vastly different accounts of the same murder.

“It is tempting to view Dylan’s appearance at the 1965 Newport Folk Festival as one in which the telling similarly varies,” Unterberger writes, “according to the musical and social tastes, values and prejudices of the narrator. There are few other incidents that set the fusion–and the conflict–of tradition and innovation, young and old, and art and commerce, in such bold relief.”

The truth may be elusive, but North Bay audiences will get a rare chance to glimpse the only known visual document of that performance on May 25 when the Rafael Film Center screens Festival! a long-lost film documentary by Murray Lerner comprised of footage from the 1963 to 1966 Newport Folk Festivals and including scenes from Dylan’s historic plugged-in performance.

The newly restored documentary (scheduled for an upcoming DVD release) is being shown as a benefit for the Marin-based charitable organization Bread and Roses, whose late founder Mimi Fariña was a pivotal member of the folk scene and performed at Newport with her dulcimer strumming husband Richard. Festival! doesn’t answer any of the questions lingering in the wake of Dylan’s performance, which found him moving steadily away from the topical songs that first endeared him to folkies in favor of his more personal and often surreal lyricism. But it does provide a better understanding of the tone and tenor of those turbulent times.

Lerner, who filmed Dylan that night from just a few feet away on stage, tells Unterberger in Turn! Turn! Turn! that he was in no position to gauge the ratio of boos to cheers, but he was privy to the visceral reaction provoked by the performance. “I was stunned, actually,” he notes. “I had a sociological reaction, in addition to a musical reaction–it was that intense for me. It felt like I was entering a new world, and I didn’t know what it was going to lead to. I’d heard electric music with Butterfield but it was different. It was like I could sense that something new was being created with [Dylan’s] look and method of singing and the response of some of the people around me.

“It was exciting and scary.”

This recently released two-CD set captures Dylan at his zenith as a folk artist. Recorded on Halloween night, these performances find the musician in high spirits, trading jokes with the fans and at one point even asking for help when he forgets the lyrics to “I Don¹t Believe You.” This is the often enigmatic Dylan at his most engaging.