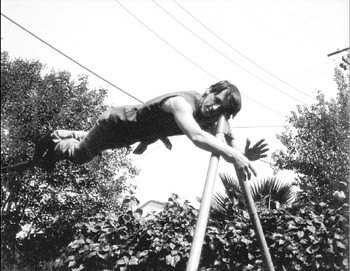 The fruits of the recording studio are inherently refined ones, because that’s what a studio is for: refining music, making songs sound clean and good. Even reclusive singer-songwriters hunkering down over the four-tracks in their bedrooms sculpt and refine sound. All of the wonderful three-minute songs on your mix tape and the little pop symphonies oozing out of the radio have been crafted with care to deliver the maximum amount of euphoria per second, like yummy audio crack.

There’s something lost in the process, though–the looseness, the freedom, the spark of creation, the happening. Every now and then a recording comes along with such qualities in spades, but it demands a good hunk of commitment from the listener for maximum payoff: the tantric sex of the music world.

A truly bizarre CD from obscure legend Rodd Keith offers both the tantra and the crack. Released on the defiant Tzadik label, the posthumous Ecstacy [sic] to Frenzy will easily be one of the most far-out discs of the year, and probably fewer than a thousand people will ever hear it. Such long-lost pathos is the underlying appeal of musician Rodd Keith, however. In the ’60s and early ’70s, Keith applied his palatably skewed musical genius to composing, performing and recording song poems (strange fruit of those “send us your lyrics” ads seen in magazines) to make ends meet.

Keith’s love of hallucinogens literally became his downfall when, in 1974, he fell to his death from an L.A. freeway overpass in a drug-addled haze. The song poems left behind– whose heavy reliance on Chamberlain organs give them an intoxicatingly woozy, hurdy-gurdy wobble–are the bulk of Keith’s musical legacy, and their accidental juxtaposition of pop-music conventions with avant-garde experimentalism have garnered Keith a cult following in the decades since his death.

After filling up one side, Keith flipped the tape over and proceeded to record on the other side. Thus, the resulting track, dubbed “Shome Howe Jehovason Plays,” appears in two versions on Ecstacy to Frenzy: on one, the right channel plays in reverse; on the second, the track is actually played backward (so that the left channel is in reverse). Whether Keith listened to the playback of the first side in reverse as he recorded the second side remains a mystery, but there’s more than enough synchronicity happening between the two channels to back this theory up.

In any case, either version of “Shome Howe Jehovason Plays” is befuddling enough for one sitting. Set against a backdrop of meandering organ drones and sudden piano tinklings, it’s like hallucinogenic funeral-parlor music, fascinating and exasperating in the same way that Lou Reed’s Metal Machine Music can be.

After slogging through Keith’s journey to the center of the mind, the three song-poem tracks on the CD seem abrupt, even if the maniacally jerky “Beat of the Traps” (not without a touch of Screamin’ Jay Hawkins-esque spook and stagger) is hardly in keeping with what was coming out of most everything else on the pop radar at the time. Oddly enough, the titular “Ecstacy to Frenzy”–doubtlessly the result of a song-poem client’s drug trip–is suave and catchy enough to suit Barry Manilow’s catalogue.

The shamelessly irresistible two minutes and 26 seconds of “Little Rugbug” stick out like a sweet pinkie in a sea of sore thumbs; perhaps the finest example of the song-poem genre, the vapid Hallmark card lyrics dote over the anonymous scribe’s toddler (“Playing on the floor / Someone I adore / Creeping, crawling, going to explore”), while Keith’s inspired Chamberlain pipes out sappy yet achingly sentimental sprightly flute, oboe and organ lines.

For complete music dorks only, Ecstacy to Frenzy offers a rare chance to hear music isolated from any commercial context. Keith didn’t record “Shome Howe Jehovason Plays” for anything other than his own utter enjoyment, and the version heard on the CD remains blissfully unaltered.