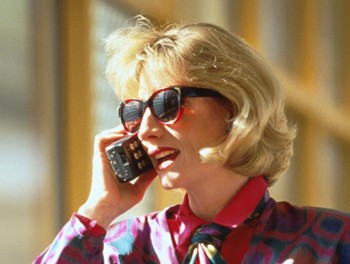 Once upon a time, only doctors, paramedics and other emergency personnel carried pagers or cell phones. Their use spread quickly into business but was purely utilitarian, if only because of the design–early phones were anything but slim and chic. (Remember Michael Douglas’ massive cell phone on the beach scene in Wall Street?) Cellular marketing has subsequently scrambled to rapidly fill every possible social niche; there are cell phones for anyone, for any reason.

This is not a rant against the inevitable proliferation of wireless technology. I’m not going to pontificate on the damages to the inherent syntax of everyday speech inflicted by the allied assault of e-mail and cell phones, or the possible side effects of holding a strong electromagnetic field against your brain for extended periods of time. Besides, many resulting mutations may be quite auspicious! For example, the next generation of high school students may not take to Shakespeare, but they will be naturals at selling real estate.

There are, however, some addressable issues that no one predicted would come along with the whole cell-phone shindig. One is the fact that, like TV, cell phones tap us into a sense of collectivity that fills the gap left by the disappearance of the tribal unit from industrial society; also, like money, they make people feel overly important. The other unexpected factor is that people on cell phones in public tend to somehow lose touch with their surroundings and make asses of themselves while annoying others.

I was in line at the bank recently when a woman took an incoming call from her daughter, who evidently wanted to go out to some store before it closed since she had finished all her homework. The woman apparently lived a good distance outside Santa Rosa and would not be able to make it in the time the daughter would have liked. I know those details of this woman’s life for the same reason that 15 other people know them: the same person who was silent and staring at the wall moments before the call proceeded to converse as loudly with her daughter as if they were at home arguing privately. “I don’t care if you think it’s unfair . . . You’re going to have to ask your father if you can . . . I’m sorry, deal with it! I can’t make it home by then. . . .”

Afterwards, she returned to her glassy-eyed wall-staring as if nothing had happened. Maybe it hadn’t for her, but everyone in the bank had unwillingly been ringside at a family dispute that neither mother nor daughter would have likely pursued had they been together in public. What is it about a cell phone that creates an illusory bubble of privacy?

I have a theory about this. I think that habitual overuse of the cell phone in public combined with radiation from the units cause a sort of psychic schism. In a mechanism similar to multiple personality disorder, that part of the user’s mind seeking privacy absconds with the mouth and ears to a dark place in the cerebellum where the Jungian archetype of an old-fashioned phone booth is found. Thus, the body is left with only a token reminder to fend for itself while the ego takes its conversations in peace. Well, it is only a theory.

When compared to issues of linguistic pollution and possibly cancer of the inner ear, the psychology of cell-phone use in public may seem more funny than serious. Still, I wonder where this trend will take us: people spending more and more time communicating through devices than with each other, even to the point of doing normally embarrassing things in public without realizing it? Could we foresee a day where everyone spends even their nature walks interfacing with some sort of virtual environment instead of what’s around them? Picture the typical flock of businessmen walking down the street: they are reading e-mail that’s been wi-fi’d to their sunglass lenses and talking to each other through their headsets instead of turning their heads and speaking. . . .

In the meantime, the world doesn’t (yet) disappear when you push “send,” and if you think you did something embarrassing while on the phone–you’re probably right.