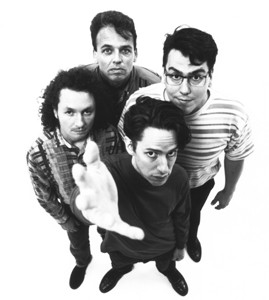 And Then Again, They May Not Be: They Might Be Giants, seen here in a 1994 photo, are among the bands whose early videos give incredulous heebies today.

Look Back in Horror

What a drag it is getting old

Recently, Mr. Bir Toujour returned from our garage with a handful of sticker-encrusted videocassettes in tow. “Look what I found,” he beamed. “Old skateboard videos! I think I dubbed Future Primitive on here. I haven’t seen it in years.”

He popped the tape into the VCR, and we saw about three minutes of the Bones Brigade skating around in what looked like Jams (remember those awful shorts?). And then we saw the old sitcom Alf. Yes, at some point, young Mr. Toujour decided that he’d rather tape a random Alf episode than preserve his own copy of Future Primitive for all time. “My God,” he cried out, “what was I thinking?”

It got even better, though, because after the closing credits of Alf, the tape gave way to an installment of MTV’s 120 Minutes, circa 1993. “So,” I asked, “you taped an episode of Alf in the mid-’80s, and then nearly a decade later, you recorded a bunch of alternative-rock videos on the same tape over more of Future Primitive?”

“What was I thinking?” he moaned again.

To a kid growing up in the Midwest at that time, isolated from decent record stores, college radio stations or hip concert venues of any kind, 120 Minutes was the way to find out about exciting new music. You had to stay up way late on a Sunday night just to catch glimpses of They Might Be Giants, Jane’s Addiction, Dinosaur Jr.–anything. It was only you and the dark, silent house–Mom and Dad would have been in bed for hours by then–with the television’s light flashing across your pale, skinny young self as you ate ice cream directly from the container. And all of these videos were so crazy and full of deep imagery and cute guys with guitars and tangled, overgrown locks. It was wonderful.

Well. The first video on the old tape was the Smashing Pumpkins’ Gish-era “Rhinoceros” (back before Billy Corgan began cultivating that Uncle Fester look). We see grainy footage of the band–not singing or playing, but vaguely fondling their instruments–lounging in a minimally furnished room. Then we see a fountain, and then we see the Smashing Pumpkins’ bassist, D’Arcy, spilling a bunch of beads or something all over a table. Then we see the fountain again.

“What the hell is this crap?” I ask Toujour. “Look, now they’re showing a cat–why?”

We see very early Red Hot Chili Peppers jumping around on a dirt pile; Social Distortion shooting pool and smoking (“What makes this guy so tough? He’s wearing eyeliner!”); and the Boo Radleys exemplifying bad fashion (“Whose idea were the floppy hat and velvet overalls?”).

The tape cut out, and with it our supply of vintage 120 Minutes episodes–until I dug up about eight lost tapes, jam-packed with good bands miming great songs in completely awful videos that I’d faithfully recorded long ago in my innocence. It’s painful to see musical artists you’ve admired for years defiling themselves in ways you’ve forgotten. After seeing three consecutive blue-screen My Bloody Valentine videos that were probably produced by a junkie at some public access facility in England, I fell into a funk.

That’s because, even though rock music will always be the most wonderful, exciting thing in the world, it will never strike you in the same way that it did when you were 15–and, man, that’s really sad. Probably the most vivid relics of that time in my life are some of the shittiest videos ever put to film. 120 Minutes petered out over the years and, I am told, semi-lives on as MTV2’s Subterranean. They play new videos.

And if you ever see old videos, they’re still the same, but not really. The world changes, and so do you, and that’s the best and worst part.