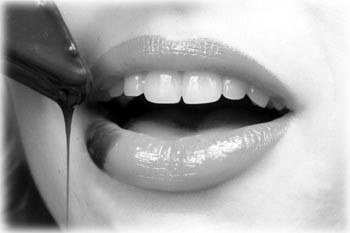 Mouth Watering?: If it’s chocolate and you’re a dessert chef, wouldn’t you really prefer a nice salty or fatty treat?

IMAGINE SOMETHING sweet: the richest, most decadent dessert ever built, baked, or injected with tasty filling. Now imagine another, and yet another. Pretend you are surrounded by desserts, not just today, but every weekday, all day. In this fantasy, dessert is not just your hobby, it’s your job, and every working shift is permeated with the thick, sugary aromas of pastries rising in the oven, gooey melted chocolate, and impossibly creamy custards.

Now take a break. Pull up a chair. Stretch your legs. After working around all this food, you’re probably a little hungry. And you know what you have a taste for, don’t you? More than anything else right now, you want a big, thick, juicy . . . pickle.

Well, if not, then this really is a fantasy.

Spurred by an editor’s casual question–“What do dessert chefs eat when they want a treat?”–this intrepid reporter began visiting some of the county’s top bakers, pastry chefs, and the like. Contrary to expectations–with only the random exception to the rule–most “dessert workers” prefer something a little salty after laboring among all that sweetness.

“The saltier, the better,” laughs Michelle Marie, the owner and creative force behind Michelle Marie’s Patisserie in Santa Rosa’s Montgomery Village. “If I can’t get that, tangy things or spicy things will do: pickles, lemons, capers. It just has to be totally different from whatever else I’ve been tasting as I work.”

A self-described “non-junk food person,” Marie describes her favorite snack-time morsel as a wrap of pickles, onions, and tomatoes rolled up in lettuce.

“I sound so healthy, don’t I?” she giggles. “Isn’t that sickening? I’d really rather eat a bowl of mashed potatoes than a bowl of ice cream.” Even so, working around such mouthwatering delicacies as her distinctive Chocolate Overload cake and the popular Soccer Torte–moist fudgy cake with ground almonds and raspberry preserves covered in a dark chocolate glaze–does take its toll on Marie’s taste buds.

“If I go away for a weekend,” she says, “I find myself getting a terrible sweet tooth. I might not want sweet things when I’m around them all day, but if I’m away for a few days, I’ll suddenly think, ‘Gosh! A little chocolate would be nice right now, wouldn’t it?'”

Theresa DiFalco is the pastry chef at the world-renowned John Ash & Co. restaurant. After 15 years with the phone company, where snacks tended toward the sweets downloaded from the break-room machine, she has redesigned her career to become one of the area’s premier creators of guilty pleasures. Like Marie, she too has developed a few special treats for breaks from batches of her “killer” tiramisu, her gourmet biscotti, and other delights.

“I take anchovies,” she describes, “and put them in a baguette and dip it in olive oil. Sometimes I throw in a few capers. Or I’ll butter some fresh bread and sprinkle salt on it.” With a shy chuckle, she adds, “Gee, I feel like I’m in the confession booth here.”

When asked why she and her compatriots in the dessert field crave salt rather than sweet, she replies, “Wow!–if we didn’t we’d all be huge! I weigh 125 and I intend to stay this way.”

At Cookies by Design in Rohnert Park, however, the staff is unrepentant in their fondness for sugar.

And after that, do pickles or capers show up in the diet?

Over at Petaluma’s 21st Century Pastry, where to step inside the shop is to risk seriously overwhelming your salivary glands, co-owner Steve Bernstein teases his pastry-packing business partner, Phyllis Heagney, for her near-religious devotion to oniony, garlicky salads while working, part of her no-desserts-till-after-dinner health regimen.

“Anyone who says they work in this business and don’t eat sweets all day is in denial,” he exclaims, though he goes on to agree that he, too, craves salt.

“I like kettle chips and tuna fish,” he confesses. “And it must have fat. Take a break from the sugar if you must, but I refuse to escape the fat. That’s just the way things are.”

In addition to their already inspiring array of temptations, the downtown bakery is preparing to install a gourmet ice cream counter as well.

“It’s pretty diabolical,” agrees Heagney, “to be surrounded by all this delicious stuff. Your taste buds might crave something different out of defense, but you never stop wanting the goodies. When you’re surrounded by indulgences, if you let yourself make them your meal, you’ll be in big trouble.”

“Let’s face it,” Bernstein adds. “We’re in this business because we love desserts. On the other hand, a good salty potato chip and some garlicky dip is nothing to scoff at.”