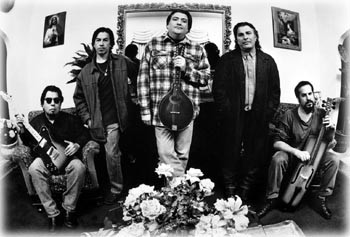 Not Just Another Band From East L.A: Los Lobos plays LBC on Oct. 4.

WE HAVE A VERY LOW boredom threshold,” says Los Lobos tenor saxophonist and sometime producer Steve Berlin. “If something isn’t exciting to us, it’s dead beyond belief. We just stomp it out and go on to the next thing.”

The next thing for this acclaimed roots-rock band is as yet undetermined. It’s been 18 months since the release of their eclectic Colossal Head (Slash/Warner), and after 14 years the preeminent purveyors of blistering rock, R&B, sultry cumbias, and polka-beat norteños find themselves strangely without a record deal (the band is renegotiating its longtime Warner Records contract).

That leaves the long and winding road, which brings them Oct. 4 to the Luther Burbank Center for the Arts in Santa Rosa.

Yet that’s a bit unsettling for a prolific band that has to its credit more than a dozen albums, soundtracks (including the Top 10 1987 hit La Bamba, Desperado, and last year’s Feeling Minnesota), tributes, and children’s records. “It’s kind of weird right now because we’re in between album cycles,” concedes Berlin, during an early morning phone call from a San Jose hotel room. “This is a sort of middle ground, so we need to think of new ways to excite ourselves.”

No problem. In fall of 1993, guitarist and accordionist David Hidalgo and drummer Louis Perez–the primary songwriters and creative force behind the band–anxiously approached three top executives in a corporate office at their record label to play a tape of their experimental Latin Playboys project.

The execs stared solemnly at the walls as the room filled, first with the sound of a scratchy archival recording and then a dark stew of weird found sounds, assorted mechanical noises, and distorted echoes of global folk music. It was a far cry from the bright Latin pop that made Los Lobos a household name a decade ago with a cover of Richie Valens’ “La Bamba.”

“Nobody said anything until the third song,” recalls Hidalgo. “It was a tough sell, but they had no idea what we were going to do. I guess it was pretty far off from what they had envisioned.”

The Latin Playboys (Slash/Warner), which derived its name from an East L.A. bar, was hailed as a post-apocalyptic soundtrack for the global village. It was the follow-up to 1992’s brilliant Kiko, a fiercely eclectic album that stretched the boundaries of the roots-rock genre with exotic songs imbued with Afro-Cuban rhythms and magic realism. “Everything fell into place for that album,” Hidalgo muses. “It came together quickly, and it was kind of like we were just going along for the ride, too.”

The breadth of their work should come as no surprise, though few imagined the heights Los Lobos would climb. Most of the band members grew up in the gritty blue-collar barrio of East L.A. surrounded by a bustling potpourri of Mexican, Chicano, and working-class American cultures. Music always was a big part of that upbringing. There were romantic boleros, the buoyant mariachi flourishes, the grittier norteños, and the narrative corridos–all from Mexico. Those were complemented by the Latin rock of Valens, the Midnighters, and other East L.A. musicians, coupled with the blues, R&B, and jazz that filled the airwaves.

This group of boyhood chums formed a folk band and spent their garage days ricocheting between mainstream rock and Mexican border music. They cut their teeth on an endless string of backyard barbecues, raucous wedding parties, and late-night dances before hooking up with the L.A. rockabilly band The Blasters, where they met Steve Berlin. Success came quickly on the heels of the 1983 debut . . . And a Time to Dance, which garnered a Grammy Award for the folksong “Anselma.” Their 1984 breakthrough, How Will the Wolf Survive?, was a Tex-Mex tour de force that showed up on everyone’s Top 10 list. It earned them Band of the Year honors in Rolling Stone‘s 1984 critics’ poll, tying Bruce Springsteen and the E Street Band.

The band recorded on Paul Simon’s landmark 1985 Graceland album, soared to the top of the pop charts with its turbocharged version of “La Bamba,” and seesawed between several albums of acoustic folksongs and often blistering electric roots rock. But their creative peak was Kiko, which revolutionized roots rock in the same way the Beatles’ best work forever altered pop. Kiko–recorded without rehearsals to infuse spontaneity–is a multicultural Sgt. Pepper’s, a mesmerizing melting pot of innovative production, disparate musical influences, and dreamlike images that has elevated the rough-and-tumble barroom sound to high art.

“It’s just a sign of growth,” says Hidalgo, who downplays the notion that the album marked a creative leap. “Music is best when it has a charm, when it’s more childlike.

Still, Berlin is caught off guard when asked to describe that creative sojourn. “We’ve created a niche for ourselves that nobody else inhabits; I really don’t think anyone else can do what we do,” he says. “In terms of how the band has changed, it’s really hard to articulate from the inside. Because we do so little planning, we just let whatever happens happen. I mean, you look at a band like U2. It seems like they have a staff meeting every 20 minutes to determine what they’re going to do and how they’re going to dress. I’m not saying that in a pejorative way, but they obviously make profound statements about their image.

“By comparison, we never talk about it and just show up for the first day of recording to see what happens, relying on our instincts and our wisdom to get us through a record. It’s the same knuckleheads doing it, but we just keep refining what we do, not so much to get better as to get deeper.

“To us that’s the most exciting part, that we play something that really strikes a nerve in an interesting way.”

Why Has Bodhi-Dharma Left for the East?