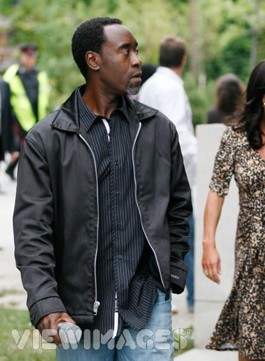 'Darfur Now' wonders: Can we fix it?

Afew months ago, The Devil on Horsebacktold of the Darfur crisis. Darfur Now shows how much progress has been made in a relatively short time. The documentary observes six men and women who are trying to stop the government-armed “janjaweed,” irregular soldiers who have been burning, looting and raping their way through the Sudanese province.

The best-known of the six subjects is actor Don Cheadle, who co-wrote a book on the subject, Not On Our Watch. Cheadle is seen trying to inform the governments who are investing in Sudan of the situation, and he takes his equally famous friend George Clooney to travel with him. At a press conference, Clooney says the Darfur rescue will be a finite process. Clooney claims that he and Cheadle talked to people who hadn’t really been talked to about Sudan. “We’re the highest-level delegation that has ever gone to Egypt. This shouldn’t be. This is embarrassing.”

Other subjects include Adam Sterling, a 24-year-old student activist and part-time restaurant employee in L.A. who gets word out about the genocide, taking his case from street corners to the California state capitol. In Darfur, we hear from Ahmed Mohammed Abakar, the sheik of the Hamadea refugee camp (population 47,000). He tries to keep peace among the traumatized and furious refugees who keep expanding their numbers. And in the hills, Hejewa Adam, a mother whose child was murdered by the soldiers, camps in a burned-out house and trains with her fellow guerillas against the janjaweed.

Pablo Recalde, a dapper aid worker in a straw fedora and a well-groomed beard, heads the World Food Program in Darfur. It’s operated out of a modest single-wide trailer in the West Darfur capital El Geneina, a town crawling with armed men. There, Recalde organizes truck caravans to the starving sections of the country.

And in the Hague, an International Criminal Court (ICC) prosecutor named Luis Moreno-Ocampo assembles a case against the Sudanese officials who have been trying to pretend their fingerprints aren’t on the triggers. Moreno-Ocampo is from Argentina. There, he had the satisfaction of prosecuting the officers who unleashed the fascist “Dirty War” on his fellow citizens. Seen patiently assembling his case, flying to the U.N. headquarters or commuting to work in a rowboat on a Holland canal, Moreno-Ocampo works against time. Yet, at the ICC, an unidentified official shrugs that two accused architects of the Darfur genocide will be surrendered by Sudan “in a month, two months . . . six years.”

Darfur Now gives some voice to Sudan’s alibis. Recalde suggests the janjaweed might be the contents of a Pandora’s box opened by the government; once unleashed, they’re hard to retrieve. A group of Arabs say that they’ve been the victims of Darfur raiders. And Sudan’s U.N. ambassador, Abdalmahmood Abdalhaleem Mohamad, inventively describes U.S. outrage over Darfur as a calculated appeal to the American black vote.

Writer-director Ted Braun keeps raising the film to an upbeat note, as if wrapping it all up, and then shifting back to a worsening situation. One wishes it had been possible to send out a squad of several directors, each taking an aspect of the tragedy, a Six Films About Darfur. But Darfur Now is rather like that, anyway; its transitions barely have any connecting tissue. (I know this is like complaining about the ill-fitting suit on a messenger bringing important news.)

Braun records the triumphs on the humanitarian side: a food convoy that makes it through without being hijacked by thieves. Sterling’s yearning to do some good leads to California Assembly Bill 2941, divesting California pensions from companies that invest in Sudan. Moreno-Ocampo poses with his hand on a pair of chairs at the World Court, which, he trusts, will soon be filled with a pair of sweating Sudanese ministers trying to get their stories straight.

If one perceives in Darfur Now a false dawn in this darkness—an upbeat tone that’s part of the slickness of this film’s technique—it fits in with the right attitude to take toward this crisis. We can fix it.