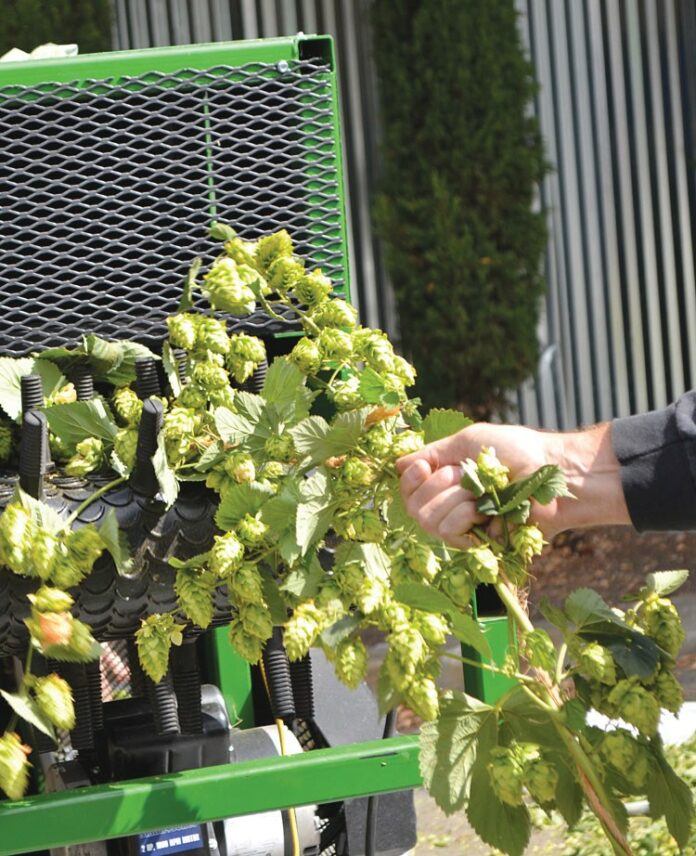 Hoping to see what might be the North Coast’s first mechanized hop harvest in generations, I’m a little confused to be directed to a parking lot.

While feeding bright, green vines into a rattling green machine called the Hop Harvester 1000, Fogbelt Brewing co-founder and brewer Paul Hawley explains that this is what he means by picking hops—it’s not cutting down the trellised vines in the field. Because the delicate flower cones of Humulus lupulus, an essential ingredient to most beers and ales, are so light, it can take an hour for one person to pick one pound off the vines. At about $8 per pound for fresh hops, any profit the grower might have made is erased, relegating the local hop revival to an occasional indulgence for craft brewers.

“Small-scale hop farming is simply not feasible without this $14,000 piece of equipment,” says Hawley, who helped found the NorCal Hop Growers Alliance, connecting brewers with farmers. Together they purchased the refrigerator-size machine, which strips 30 pounds of hops off the vine in half an hour.

Fogbelt released five “wet-hopped” beers in an event on
Sept. 10 to help promote the movement. Other brewers making fresh-hopped beers from the Alliance’s hops this year include Russian River Brewing’s Vinnie Cilurzo.

Most commercial brewers, including craft brewers, use hops that are dried whole, or dried and pelletized. While this can be a high-quality product, there’s a difference. “It’s kind of like cooking with fresh herbs instead of dried herbs,” says Hawley.

Fogbelt’s Atlas blonde, brewed with Chinook and Columbus hops grown in Cloverdale, is a milky, citrus-tinged refresher that’s certainly wet, but not too hopped. Treehouse saison, all biscuit and orange peel, is lightly hopped with Cascade and Chinook hops from Fogbelt’s own plot.

Brewed with 100 percent Cascade hops—think Sierra Nevada—Sentinel pale ale is a mellower, fresher version of the classic California style. Contrary to my expectation that these beers would be hopped-up, they show agreeable restraint and balance. I am told that the Fresco Del Norte IPA is earthier than usual, without the pelletized hops that show a more tropical character. But the bitter oils from Clearlake-grown Centennial and Chinook hops outlast the toasty, woody malt flavor and linger for a long time after I’ve left the brewery. It’s bitter—but a clean, memorable, NorCal bitter.