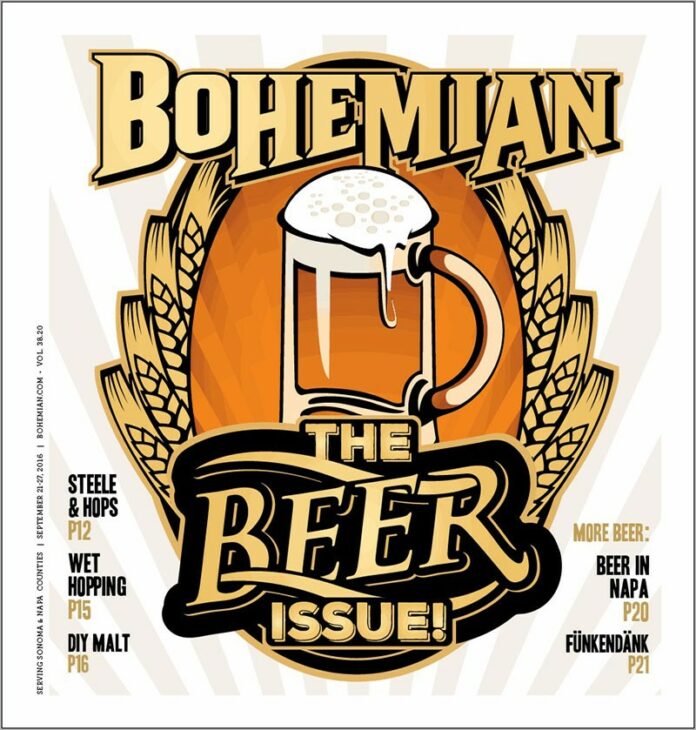 Good and fed up with John Barleycorn last fall, I plowed him down in the ground and, as in the ballad by ol’ Robert Burns, “put clods upon his head.” Would that it was the end of him.

I was inspired by my visit last year with brewer Nile Zacherle, who experimentally grew barley on four acres of fallow Napa Valley vineyard land for his Mad Fritz beer (“Craft Malt,” Bohemian, Sept. 23, 2015) and tantalizing rumors of other such projects. Up in Ukiah, Mendocino Grain Project’s Doug Mosel has grown wheat for Almanac Beer Co., and says there’s interest from brewers for locally grown barley. Malted barley is, after all, the main ingredient in beer—besides water—and in an industry that constantly emphasizes pride of place like craft brewing, locally grown barley is sorely lacking.

Native to the Middle East, Hordeum vulgare, which is barley’s stripper name—wait, no, barley’s Latin name, sorry—grows just about anywhere that hay grows OK. Hay is for horses, while beer made from homegrown barley is for heroes. Besides a little honest toil, a bead of sweat or two off the brow, what could be easier?

After growing, malting and brewing my own barley into a sort of beer, I am completely amazed that ancient civilizations ever discovered brewing in the first place, and having gone through the hassle, why they didn’t quit at once and go back to fermenting goat’s milk. Yak’s milk. Pinot Grigio—anything.

I bought a pound or two of barley at a farm-supply store, scattered the seeds over an area of 700 or so square feet and raked them in the ground with a sort of harrow, the design of which the less said, the better. And waited for rain.

On schedule, John Barleycorn got up again, and was easy to spot. Stout green blades of grass sprung out of the dirt, promptly catching the eye of a resident jackrabbit, also. For several months, I figured the well-mown barley crop was merely a donation to said bunny. Nevertheless, John Barleycorn, “weel arm’d wi’ pointed spears,” as our friend Burns put it, did sprout from the low-growing grass. By May, the seed heads had drooped and dried, and were ready to harvest.

This crop was too small even for the compact research plot combine operated by the Mendocino Grain Project that harvested Zacherle’s barley. I could have gone old-school with a scythe, but recalled what a grim (anyone?) failure it was when, years ago, I once tried mowing tall grass that way. I settled on kitchen scissors, which made for a slow-going spectacle. Indeed, I more than once heard a mocking voice—if only in my own head—quip, “That’s a hell of a way to brew a pint of beer, buddy!”

AN UNDERQUALIFIED PEASANT IN THE WRONG CENTURY

You’ve heard about separating the wheat from the chaff? Same goes for barley. The kernels had to be separated from the mass of straw I’d collected, but without machinery of any kind, I turned to ancient Egyptian murals for reference. One way to thresh a crop is to beat the straw with a stick, but I settled on stomping and hopping around on an oil-stained garage, or threshing, floor. For this step, there was no imagined voice to mock me—just a few imagined, sadly shaking heads.

But when I brushed aside the spent straw, something wonderful was revealed, and gave me an ancient thrill to behold: a healthy pile of perfect, golden grains. After winnowing the remaining chaffs and spikes, I had 12 pounds of barley to brew.

THE UNEXPECTED HABITS OF THE ENDOSPERM

But not just yet. To prepare the starchy endosperm of the grain for brewing, it must first be malted, a process I’d only vaguely understood to have something to do with sprouting. In pictures I’ve seen of the malting floors of Scottish distilleries, this looks picturesque and tidy enough; up close, sprouting barley—trigger warning!—resembles a tangled mass of wriggling white spiders, or, as a friend to whom I’d texted a photo of this said, “Will looking at this make me pregnant?”

While the chits, or rootlets, emerge from the kernel and search for Mother Earth, inside the grain the turgid acrospire reaches for the sky. So you can see where ancient pagan cultures might have got some of their racier religious ideas.

After it was dried and kilned, or whatever facsimile of this process I managed (most was air-dried or dried at low temperature in the oven, while a small portion was pan-roasted on a Coleman camping stove), the frizzy mass looked like something I’d brushed out of my cat’s tail. Then it was cleaned—again, tediously—through a sieve and brought to the Beverage People for grinding.

These homebrew suppliers charge only 10 cents per pound for the service, and their advice is free. If I’d asked it of them earlier, I might not have mashed my grain in water at 160 degrees Fahrenheit—a little too high, says the Beverage People’s Bob Peak, but probably not the reason I ended up with a wort, or unfermented beer, with the unimpressive specific gravity of 20 points. This would make a sort of beer, but almost a temperance beverage, a barley tea of 2 percent or so alcohol by volume (ABV)—perhaps it might aid the digestion, but not so nonalcoholic that the Feds wouldn’t crack down on health food stores for it, as they have for .5 percent ABV kombucha. Is my terroir telling me to tone it down?

Another culprit could be the cultivar that I planted, a barley by the name of UC 603. According to a helpful pamphlet from UC Davis that I only consulted after the fact, UC 603 sports a long-haired rachilla, and, should you need to know, “the glume is longer than one-half the length of the lemma.” Released in the 1980s, it was bred to be resistant to net blotch, scald, powdery mildew and leaf rust, but is already susceptible to some of those—so look over your shoulder, UC 603. More to the point, UC 603 is a six-row feed barley, which means it’s higher in protein, less so in starch, which is all-important to beer making. I might have done better with a two-row malting barley.

The malting process is where things most likely went awry, but it’s hard to say exactly how, since there are so many variables in temperature, timing and so on. Again, it’s a wonder that ancient Mesopotamians and Germanic tribesmen alike figured it out without a BS in fermentation science.

RICE TO THE RESCUE

Peak suggested I add rice extract to boost the alcohol potential of the ale without affecting the flavor profile. I settled on three pounds of rice extract and one pound of light dry malt, and fermentation proceeded without a hitch thereafter. (I had planned to add hops that were grown quite locally in my yard, but like the groundhog of lore, they came up in spring and, not finding it to their liking, retreated once more into the ground. So I brewed with purchased, mellow Golding hops, plus a smidgeon of Columbus and Spalt.)

After adding a dash of corn sugar to produce CO2 bubbles in my “Ranch barley Sonoma Valley terroir amber ale,” I brought a bottle to the Bohemian to get the staff’s reactions.

“Rooty” described the richly colored, amber ale’s aroma best; “sarsaparilla” put a sweeter spin on that. It’s malty, all right, but “fleeting,” with a hint of lemon that develops after time in the glass. Confusion reigned as to which was which when I cracked open a bottle of curiously citrusy, amber Altbier I’d made with purchased malt, and brought for thirsty Bohos in case “ranch barley” was a flop.

The dry finish was noted to drop off, like Budweiser—which makes sense, since Bud is made with a good helping of rice, too. But that rooty, malty flavor, like a soft caramel candy that’s just been dug up from the gravelly clay loam soil? Maybe that there’s the terroir—a fuzzy concept in beer, for sure, as fuzzy as the logic of growing, malting and brewing one’s own barley in the North Bay.

Of course I’ll try it again.