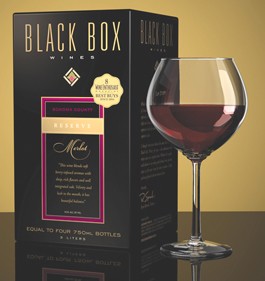 Black Is the New Box

Boxed wine is back? Seems contrary to trend. The totable grape beverage of many a wine drinker’s youth becomes the sophomore connoisseur’s easy object of derision. But who could have guessed, for instance, that the Beatle-haired, trimmed-bearded look lampooned in the ’90s as “NPR dad lite” would become the de rigueur coiffure of young men today?

Earlier this year, the Nielson Company reported that boxed wine sales jumped 31 percent in 2008, compared to 4.4 percent for wine overall. The generally accepted reason is lowered consumer expectations, not a rise in quality. Yet wineries return to the holy grail of upscale bulk wine again and again, hoping to fill it from the spigot of an anaerobic bladder. To differentiate their product, they’ve devised a range of strategies.

First, change the color of the box. Black Box Wines‘ packaging conceit is surely meant to resonate with “black tie”—as in, one needn’t feel ashamed of serving it at the next society fundraiser, and even the next fundraiser after that. The bladder-in-the-box keeps wine fresh for weeks after first tapping the spigot, upon which it gushes out in an alarmingly fulsome stream. The 2007 Monterey County Chardonnay ($25 for 3 liters) has the aroma of popped popcorn, a nip of lemon zest and a lemonade stand’s worth of zing. Fine for your unstuffy buttery Chard fans; a glass was enough for me.

Boasting a Sonoma County appellation, the deep purple NV Reserve Merlot ($32 for three liters) shows stewed fruit, plum and heavy char aromas, with a racy acidic attack and drying, terry-cloth tannin. These exaggerations made the wine seem to be hanging a sandwich board, declaring, “Serious Merlot here, really!” Not too bad an effort, but I preferred the less aggressive 2007 Central Coast Cabernet Sauvignon ($25 for 3 liters). The ruby red wine, with small servings of cassis, cherry skin and plum, isn’t trying to be anything but a simple, easy-to-like wine that’s both more than expected and exactly what I want from a practically never-ending tap.

Second, change the shape of the box. No nonsense, lightweight Tetra Paks—think soy milk and soup stock—are gaining shelf space and lowering carbon footprints, according to the 10-point sermon printed on a carton of Three Thieves Bandit Wine. The 2007 California Cabernet Sauvignon ($5) pops out of the box with jammy, strawberry-preserve fruit. Dry and substantial, it would be a fun picnic quaff, if the steely finish didn’t linger a bit too long after the fruity artifice fades. Somewhat sadly, Three Thieves jettisoned the little glass jugs of Lodi Zinfandel and Tempranillo that endeared many to the brand.

Third, ditch the box and go back to the screw-top jug. Sonoma Valley upstart Bedrock Wine Co. delves back into the beguiling boutique jug arena with “Sherman & Hooker’s Shebang” North Coast Red Wine ($15.99). The second cuvée skips on the Sonoma Valley vineyards and pre–Civil War backstory of the first, but with better results. The old-fashioned blend has rustic airs and barrel-aged pedigree. Opaquely purple, it gives up just a hint of dark fruit, cured figs and spicy Christmas cake; its chief achievement being a hearty harmony of Syrah, Petite Sirah and Zinfandel that’s both robust and well-rounded. Not too cheap, or unbreakable, it won’t last four weeks after opening—and why in heck should it? It’s good for one barbecue, a wine-country tailgater or for just sippin’ on the porch, listening to public radio and watching your beard grow.