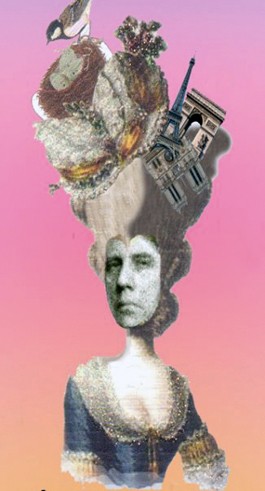 “I really don’t think being gay is all bad. Look at our king and the fun he’s had!”

So observes the outrageously inexpressive servant Bidet, about halfway through L’École de Maldetête (The School of Headaches), an inspired, all-in-verse, “all-American” homage to the works of French satirist Moliere—with a decidedly “No on Proposition 22” spin. Presented by the Imaginists Theatre Collective, located inside an unassuming Quonset hut in the heart of Santa Rosa’s A Street arts district, the original play, written by ITC’s Brent Lindsay, takes the traditional absurdist misunderstandings of commedia and adds a dash of Mel Brooks and a sprinkle of ’80s TV sitcom.

Moliere was a fan of the forbidden, investing his plays with a naughty you’ve-never-been-where-I’m-about-to-take-you energy. With L’École de Maldetête, first performed in 2000&–2001 by Lindsay’s former troupe, Knights of Indulgence Theatre, Lindsay pushes Moliere’s taboo-busting spirit into the arena of same-sex attraction. What might have become an edgy, in-your-face agit-prop, with an aura of danger and confrontation, ends up instead, as a result of Lindsay’s light authorial touch, to be a giddy, sweet, and big-hearted embrace of love, love, love.

And it’s all done in rhyme.

Directed by Lindsay, who also performs, the five-actor cast is a bold mix, with a few former students of ITC’s apprentice programs getting a shot at working side by side with a pair of highly experienced performers. As a result, the show carries a delightfully midnight-party vibe, with all five actors clearly as committed to the technical demands of the piece as they are enjoying the wild-rumpus outlandishness of it all.

That feeling could be infectious. Just when the ITC needs one most (the company is currently fundraising to keep the place open), they might have finally found the big, blow-the-doors-off hit they’ve been looking for.

Pom Frites de Maldetête (a first-rate Lindsay) is a middle-aged teacher in a small French town who has fallen for his prize pupil, Legume (a hilarious Beto Brassan, a 16-year veteran of the theater, originally from Mexico City). Legume, insisting that he is not “that way,” has been ineptly courting the beautiful Chausette (Quenby Dolgushkin, wonderful in the role), but the wooing has been rough, mainly due to Pom Frites’ meddling.

Hoping to win Legume for himself, the lonely instructor has been relentlessly pushing his view that women are the enemy. Early on, an intense young woman named Patisserie de la Pain (Tessa Rissacher) arrives in town on business from the dying king. She’s searching for the long-lost twin son of the Monarch, sent away years earlier to the country, but then lost track of. When Pom Frites mistakes her for Chausette, he bans all women from his home and school. Undeterred, and certain that Pom Frites is hiding evidence of the young man’s whereabouts, de la Pain disguises herself as a man, returning with the name Quand de la Rue.

At the same time, Chausette, believing that Legume has been unfaithful, elects to resign from the world of female pursuit, and also dons the garb of a man, appearing under the name la Vache. Smitten by both of the two newcomers to town, Pom Frites ends up attempting to court both at the same time, with the help of his hilariously blank-faced servant Bidet (Erik Dolgushkin), whose apparent cluelessness may not be as real as it seems.

The cross-dressing also throws Legume, who cannot understand his fierce attraction to la Vache (really Chausette), who is alarmed to find herself attracted to la Rue (really de la Pain), who definitely is “that way,” and is suddenly smitten with Chausette. By the end of the second act, even Legume is cross-dressing, the whole thing having turned into an absurdist wonderland of rainbow-colored confusion.

Whatever else one might feel about The School of Headaches, this is one very funny show. And while it might not single-handedly change any minds (or overturn Prop. 22), it may introduce a whole new audience to the Imaginists, a bold and innovative ensemble committed, as Moliere was, to changing the world one laugh at a time.