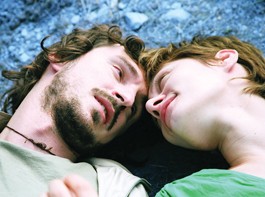 The three men gathered on the Love Level of the Bohemian‘s offices are wired. “We’re bringing our ADD vision to life,” one of them proclaims. And for the next 30 minutes, a veritable boil of ideas pours forth from them, none deficient or disorderly at all in getting attention.

The three—David Fields, Eric McIntyre and Jason Perdue—represent the nucleus of the North Bay Film and Art Collective (NBFAC), a new nonprofit aimed, McIntyre says, at bringing “art, film and music to a community that’s desperate for it.”

To that end, the NBFAC has taken up residence in the old brick building that last served as the North Bay campus for New College of California. Owned by the Arlene Francis Foundation, the building has been empty for some good time, and its location right in the heart of Santa Rosa’s Railroad Square makes it perfectly situated to capture some of the creative energy of that area—home in September, for example, to the Handcar Regatta—and find it a spot to enjoy even on rainy days.

The first above-radar event planned by the NBFAC begins Nov. 19 with the launch of the Global Lens film series, a suite of international documentaries. The collective has enlisted a stellar slate of chefs to pair Saturday-night screenings of the films with food cooked by such area stars as Gary Chu (Nov. 21) and Matteo Granados (Dec. 19) as well as underground restaurant mavens the Blind Pig (Dec. 5) and the organic wisdom of the folks at Peter Lowell’s (Dec. 12). The films on these nights are preceded by an appetizer course, stopped for an intermission with the main course and followed by dessert for $40 a person or $70 a couple. Running Thursday&–Sunday through Dec. 20, films without food are just $10, and the Nov. 19 opening-night party is $25. The Macedonian film I Am from Titov Veles, above, screens Dec. 11.

But screening films isn’t enough-—the trio are also making one. With the working title Meat Utopia, they are documenting modern-day meat culture, also plan the establishment of an online channel NorthBayTV.net and even a theater space inside the building replete with a green screen. “People want art, they want edgy and exciting fun. We want to be an epicenter for that,” McIntyre emphasizes. “We want to be a community center in that way, but a directed one.”