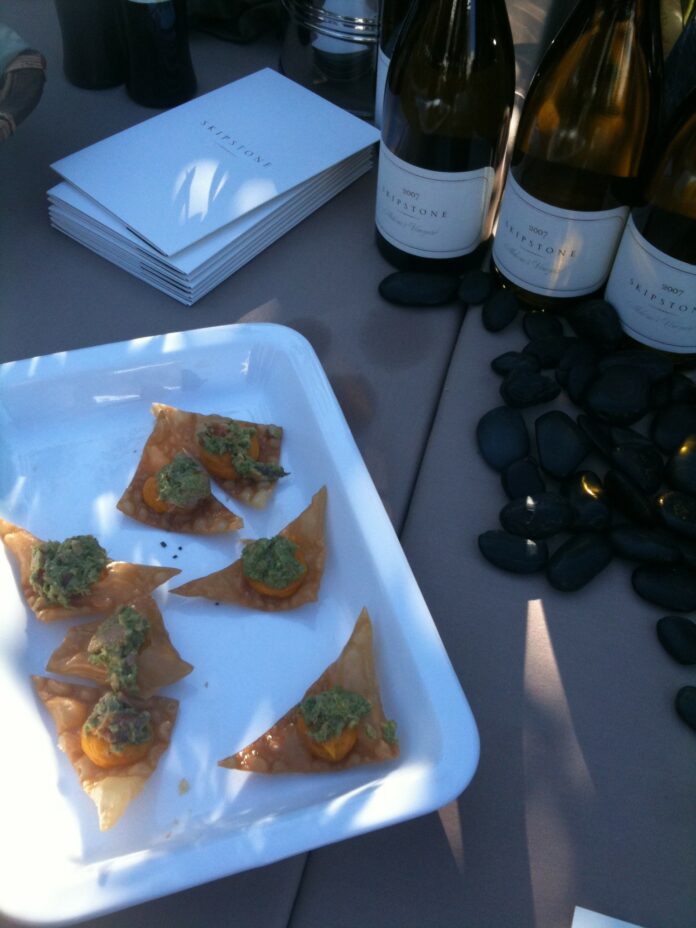 The first annual Artisano event, held Nov. 14 at the Geyserville Inn, was one of those rare afternoons where giddy patrons greeted each other by saying,”I sure hope that this never gets popular!” Alas for them, as Artisano is destined to be hugely popular—and why wouldn’t it be? Small-production cult wines rarely enjoyed by the public married well with gorgeous food from local purveyors in a hidden setting on a stellar fall day. Such goodness is bound to eventually attract a crowd. Unlike this summer’s Showcase of Sonoma, which is now so huge as to resemble a tent city and which this year featured at least 15 different kinds of gazpacho and little else to eat, Artisano found patrons sitting at tables with forks thoughtfully grazing through small plates of creamy polenta with goat shank, fresh made flatbreads from a portable oven, barbecued lamb with a nutty pilaf and nuggets of fresh toffee made in nearby Healdsburg.

The small crowds made for easy access to the winemakers, all of whom were glad to chat while they poured. Douxup Wine Works co-owner Andy Cutter being a case in point. An affable man of a certain age, Cutter explained the pronunciation of his label. It’s not some fancy French lisp with the “oux” sounding like “ew.” Rather, it’s pronounced “Duck Soup,” like the Marx Brothers film, a small semantic joke that he and his wife, Douxup co-owner Deb Cutter, devised to give themselves a private chuckle with their first personal brand after decades of making wine for others. But, Andy explained, the weird spelling gave pause to his San Francisco wine broker. The guy just couldn’t sell the stuff, no matter how toothsome. So the broker got creative, telling customers that Andy was Harpo Marx’s illegitimate son and the unintelligible name a secret reference to his parentage. The wine sold out and sold out and sold out. As for the story? It took on its own bowed legs, eventually appearing—to Andy’s immense delight—as the answer to a question in the Trivial Pursuit Wine Edition.

I dare you to name another public food and wine festival where a winery staffer even has time to tell you his or her name, let alone a long rambler like that one. Let’s hope it doesn’t get popular.