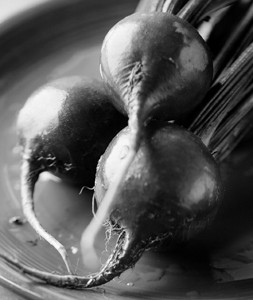 Earth’s Jewels: The bold, the dusky, the bleeding.

Beets, the muddy little hearts of the earth

The earthy, the lusty, the sensuous! The lowly, the vital, the primeval! The bold, the dusky, the bleeding! The red, the ruby, the violet! The root, the heart, the beet. Beets are one of the only vegetables to have inspired epic novels (well, one, and it’s a Tom Robbins novel, so maybe it doesn’t count). Beets will tint your fingers pink and turn your shit red. Beets mean business. They are like that special friend you have whose personality is so wonderful and assertive that you can only handle seeing her once or twice a month.

The most unfortunate among us have chosen to live an adult life totally bereft of beets, and the can is to blame. Beets from a can are, somehow, not beets. Evil childhood memories of vile, tinned beets have inflicted millions of negative beet associations, which it is our civic duty to erase.

There are cookbooks out there that surrender to sensual terms in describing beet preparation, calling to steam-roast them, cool them slightly and “slip them out of their skins.” While this may sound saucy and all kitchen-kinky, it’s also unlikely. I have yet to see one beet slip willingly from its skin. Disrobing the prudent beet takes some effort and patience, though there is a good deal of joy in seeing the smooth, round little bulbs that lurk inside their rough and ruddy skin.

Some cooks prefer not to stain their fingers with the stripping of beets, and so they wear latex gloves. Little do they know that hand-staining is one of the best things about beets, and surrendering to a light purpling for a few hours (like abstract expressionist henna tattoos!) makes the vegetable taste even better. You bond. You become one with beet, which in turn transforms you into an artist.

As for, ahem, what else beets do to your body, according to food scientist Harold McGee, a single genetic locus controls the ability to metabolize betacyanin, the pigment that makes beets that purplish-red color. Those who have inherited two recessive genes pass betacyanin in their urine. So it is best not to serve both beets and asparagus at a dinner party, lest a tiny percentage of your guests, while freshening up, assess their natural fluids and fear they’ve suffered a complete body-system meltdown.

Not all beets are red purplish-red, anyway. There are golden beets and pinkish beets and candy-cane-striped Chioggia beets, all of which look very pretty but lack the essential earthiness of the common yet exceptional red beet. These alternatives are perfectly suited for use when you’d prefer something a little less beety.

Purchased in bunches with the greens still attached, beets provide two vegetables in one, because the greens are rather chardlike in character (you can’t eat the stems, though) and are wonderful braised with garlic, or chopped and tossed into soup–beet soup, for that matter.

It’s possible to fry beets, though I would not recommend it. A chef I once worked for asked me to peel beets, cut them into matchsticks and deep-fry them for use as a garnish–which I did, though halfway through the process, I yelled, “Chef! The beets are turning the fry-o-lator oil red! Won’t everything fried in here be red now?” “Well, boo-hoo,” said Chef. The resulting fries tasted not unlike small twigs.

There are plenty of ways to prepare beets without tainting several gallons of oil, including steaming, roasting, simmering and–my favorite–pickling. Woe be to the poor soul who has not experienced the pleasure of knowing there lurks a jar of pickled beets in the back of the refrigerator! Pickled beets turn out to be much handier than you’d imagine, although most uses tend to be related to the art of snacking. (Try spreading crème fraîche over a dark rye cracker and topping it with a big slice of pickled beet, a preparation that will only taste good if performed while standing in front of an open refrigerator.)

Pickled beets are laughably simple to make. All they involve is peeling and slicing beets, boiling them in vinegar, sugar and salt, pouring that liquid over said beets and chilling/forgetting about the whole mess for two weeks. After that, boy, you’ve got a treat, especially if you’ve dropped a peeled hard-boiled egg into the brine. The egg will pickle in just a few days, and when you pull it out and split it open, it will create a psychedelic food explosion! The white will be ringed with the most shocking of pinks, while (if you’ve cooked the egg properly) the yolk will be a sharp, impossible yellow (or, if you’ve cooked the egg improperly, carry a dull, gray-green tint). Nothing will make you feel like a crusty old man faster than enjoying a midafternoon snack of pickled beets with a pink pickled egg.

Of the latter–beet soup–I have a block in the freezer. This is the mystifying thing about beet soups of any kind. The first two days they are around, they enthrall and nurture. After that, though, it’s just too much beet; they lose their allure. Which is why I always freeze half the batch and why that frozen mass will sit, as ominous as a bruise, in the freezer until anyone can face the prospect of sitting to greet yet another all-beet meal.

Do not discourage beets from flirting with dessert. They can be grated and baked into cakes à la carrots, or cooked, puréed and baked into custards à la pre-pie pumpkin filling. Perhaps this sounds, well, gross, but think about it: beets are naturally sweet (we get sugar from sugar beets, right?), and their status as the most pigmented of vegetables should not discourage us from branching out. Beet pie is quite striking, though I recommend blending beets with either puréed and cooked butternut squash or pumpkin, lest you wind up with an overly aggressive mess.

In general, I like to roast beets when pairing them with meat or other roasted vegetables, and boil them if they are going to be tossed in salads or pickled. Peeling beets with a heavy-duty vegetable peeler prior to roasting is really the way to go (after roasting, they are both greasy and hot).

Campanile chef and La Brea Bakery luminary Nancy Silverton likes to place skin-on oiled beets in a roasting pan with a small amount of water, cover the pan tightly with plastic wrap, then foil and roast them at 350 degrees until tender. This sounds like a very effective method, though I’m still too wussy to place a pan covered with plastic wrap in a 350 degree oven.

To boil beets: Trim most of their tops (if bunched) and long, tapered tails, and place beets in a pot of salted water. Bring to a boil over high heat, reduce to medium and simmer until the tip of a knife easily pierces all the way to the center of the beet, 20 to 90 minutes (the time will depend on the age and size of the beet). Be aware that beets can be coy and sometimes will give off the impression of being easily pierced with the tip of a knife before they are thoroughly cooked, which is why I like to continue boiling them a few minutes beyond what intuition allows. When tender, drain the beets, trim off any undesired leftover bits from the head and tail, and proceed doing whatever you will.

To roast beets: Peel the skins off with a heavy-duty vegetable peeler and, if desired, cut into wedges. Toss with a tablespoon or two of olive oil, season with salt and freshly grated black pepper, and spread across a baking sheet or roasting pan in a single layer. Place in a 400 degree oven and roast, tossing occasionally, until the beets can be easily pierced with the tip of a knife, 30 to 90 minutes, depending on the size and shape of the vegetable.