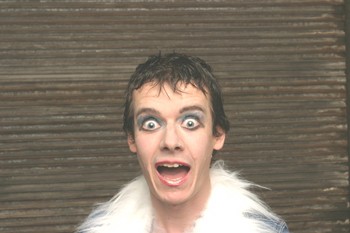 Bobby Conn is there to make your heart beat faster

My boyfriend took one look at the promotional Bobby Conn trading cards I was supplied with for this story and instantly recoiled in disgust at the image of Bobby’s lead guitarist, Sledd. “Who the hell is that–Derek Smalls?” he scowled.

Well, no, although there is initially something very akin to Spinal Tap about Bobby Conn and his backing band, the Glass Gypsies, namely, can these people be serious? With Spinal Tap, the very comforting answer is no. With Bobby Conn, it’s hard to say. He and his platform-booted lot look like they just stepped out of Rodney Bingenheimer’s English Disco circa 1973–vinyl pants in primary colors, eyeliner galore, very prominent streaks of high-cheekbone rouge–and this is a scary thing, making one suspect that David Bowie recently had a yard sale.

The Chicago-based Conn is as diminutive of frame as Iggy Pop, spews highly political songs tempered with liberal references to sex and has a penchant for performing in naught but a pair of purple bikini briefs. A few years ago, he wrote an article on his supposed rock ‘n’ roll-induced erectile dysfunction for Vice magazine.

In a few short minutes, I will be speaking with this fellow over the telephone, and I have absolutely no idea what to say to him. (“Hey, man, bought any new Speedos today? Is your hard-on situation any better now? How come your new album sounds like Bowie Lloyd Webber?”)

And it does–Conn’s new album, The Homeland, is bursting with grandiose rock-opera action and has a very Zappa-esque inclination toward the absurd. Lyrically, The Homeland seethes with disgust over the current state of America’s role in world affairs from start (“We are your friends, we come in peace / We brought our guns to set you free”) to finish (“Good and evil, keep it black and white / But if you’re willing to die for what you believe / Then we’re happy to kill you all”).

This all sounds much better when imposed against driving Moog, Hammond and Farfisa organ filigree; adventurous metal guitar riffs; and Conn’s Prince-like falsetto vocal affectations. Prince comparisons come up a lot in journalistic sizing-ups of Conn, who, by most accounts, struts about like a sexy little fuck onstage.

“I go into the audience during every performance I do, unless there’s some kind of weird security chasm,” says Conn, once our unexpectedly easygoing telephone exchange ensues. “If I have the opportunity, I’m there–because it’s about people. I like to touch people, and I like to hug them, stroke their hair. It does not matter if you’re particularly good-looking, or a boy or a girl. If you’re there and you have a beating heart, I’m there to make it beat faster.”

So when Bobby Conn and the Glass Gypsies infiltrate the Raven Theater on March 4, expect wild clothing or a lack of any clothing, lots of makeup, gentle caresses and sweat. Personally, I feel very confident in stating that the North Bay has not hosted a rock show like this since, um, never. So does the show’s promoter, Tod Brilliant, who, through the Roshambo Winery, has also brought unlikely North Bay musical visits from the Swords Project and Experimental Dental School. For the Bobby Conn show, Brilliant is offering a money-back guarantee “if this isn’t the best rock show you’ve ever been to.” All you have to do is write a 200-word essay describing a superior rock event.

Perhaps this Bobby Conn experience isn’t about being the best rock show you’ve ever been to. In my book, interesting is good enough, and Conn’s antics–plus the Raven’s old-school movie-house layout–should instigate something of interest.

“I think that the proof is in the pudding, and I’m about to serve up a man-size portion of pudding to the folks in Sonoma County!” Conn ensures, with just a tad more calculation in his voice then is perhaps called for.

Yes, Bobby Conn is serious about being Bobby Conn, whoever that is.