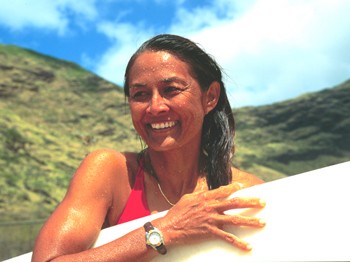 ‘Heart of the Sea’

Sunn Flower: Pioneering professional surfer Rell Sunn was here too briefly, but at least she was here.

Rell Sunn is dead! She’s dead! I simply cannot believe that the woman whose life is so fully sketched during an hour’s viewing no longer walks the earth, no longer swims in the sea. What’s more, she’s been gone since 1998, and I had never heard of her while she was alive. I am bereft; what time I wasted in the ’90s not knowing about and worshipping beneath the luminosity that was Rell Sunn.

A founding member of the Women’s Professional Surfing Association and one of the pioneering women to take a board into the water for championships and television, Sunn was one of those people who tread upon the earth far too infrequently. In Heart of the Sea, a documentary screening on Saturday, March 6, as part of the Sonoma Film Institute’s ongoing season, she mostly tells her own story.

Born Kapolioka’ehukai, meaning “heart of the sea” in Hawaiian, Sunn remembers that she could “read the ocean” before she could read books. “I thought,” she says with an inward smile, “that I knew everything I needed to know from being at the shore.”

Raised in the small, poverty-stricken Hawaiian town of Makaha–a place she describes as having residents who never move out (“they just move over”)–Sunn grew up under the sun, surfing daily, sleeping with the surfboard she won in a contest tucked under an arm, cutting school and chasing the DDT truck that regularly dispensed a spray so thick that she would come home drenched in the stuff, able to slick her hair back into place with poison.

Already a women’s surfing champion at 32, a single mother who passionately danced hula and supported her daughter by being a beach lifeguard, Sunn was toweling off after a competition one day when she felt a lump in her breast. Over the next 14 years, the cancer came and went during four chemotherapy treatments, a complete bone marrow transplant and even a coma.

In Heart of the Sea, Sunn remembers being in the coma, dreaming constantly of an elusive wave she was paddling toward but couldn’t catch. She finally caught the wave and coasted in upon its crest. That was the day she regained consciousness. “Surfing,” she says later, “saved my life.” Aye, were that only the case, though daily skimming of the ocean’s deep poetry must certainly have lengthened it.

Known as the queen of Makaha due to her annual youth surf championships–which were started to enliven a handful of bored summertime kids and grew into an event attracting thousands–Sunn had the type of compelling unadorned beauty that one cannot look away from. Even when drastically ravaged by chemotherapies, her radiant smile and intelligent glance remained sharp and quickened.

When not acting as “Auntie” to the children of Makaha, surfing professionally, rearing her daughter, doing local morning radio and national sportscasting or dancing hula, Sunn volunteered in cancer support, offering information on the many treatments she had first-hand knowledge of, discussing such possible culprits as DDT and helping the newly diagnosed begin their own passionate journey toward health.

But what Rell Sunn really did was surf. Slipping as easily into the water as Aphrodite, she surfed every single day that was spent anywhere near the ocean. Just before her death, too weak to paddle herself out, her friends towed her into the waves so that she could glide back to shore. Hawaiian lore dictates that the souls of the ancestors live in the ocean. They are embodied by sea turtles and other creatures, animals who look out for the swimmers splashing past them, protecting them from harm.

When Rell Sunn died at age 47, she too was returned to take her place among the ancestors. “When you get up in the morning and have the energy to get in the water,” she says quietly in Heart of the Sea, “you have your life again.”