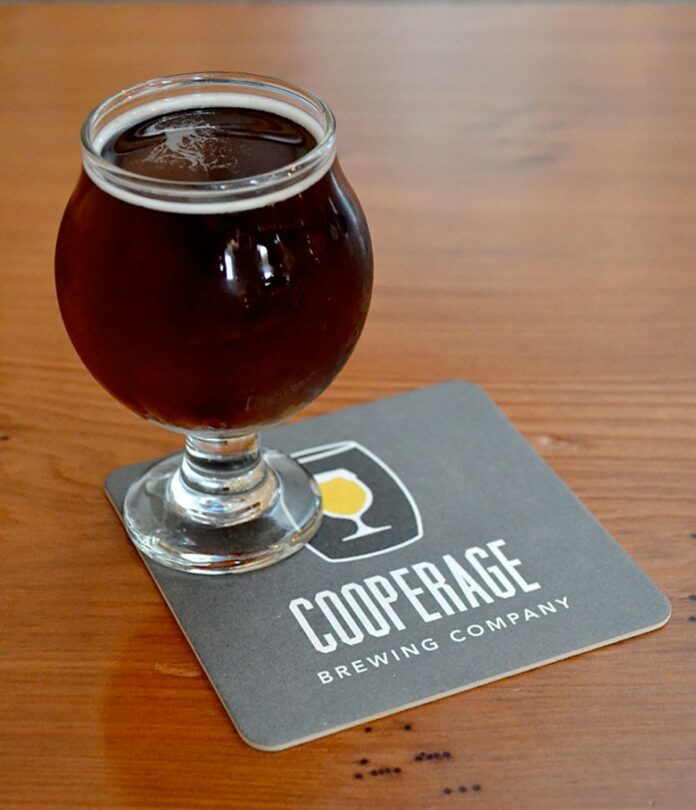 Coopers do their coopering in a cooperage, that we know. But cooperage can also mean the use of wooden barrels, generally. Let’s use cooperage in a sentence: “Hey,” said the craft beer enthusiast, “that new craft brewery Cooperage has major cooperage.”

Not so fast. Barrel-aged beers take time to get their funk on—one year in the case of Cooperage, which opened seven months ago in a warehouse in a Santa Rosa business park around the corner from Siduri Winery. The beer is still aging in some 60 second-hand barrels that formerly held wine, port and whiskey.

But even without a namesake beer (as of yet) and no food service besides bags of popcorn, and residing in a hard-to-find spot, Cooperage is already an off-the-hook popular destination brewery. On a recent Monday afternoon, even before 4pm, every spot at the redwood slab bar is taken save one, and most of the high tables in the no-frills space are filled. The music’s good, the buzz is convivial, nobody’s anxiously crowding the bar and I heard neither hoot nor holler during the hour I spent there. Like a cross between a student union and a coffeehouse—but where the menu is all beer—Cooperage is a neat illustration of the difference between the current “craft beer” boom and the “microbrew” heyday of the 1990s: no brewpub is required. And it’s OK to order pizza in, the bartender tells me, and some days, a food truck finds its way there.

The beer sampler is “choose your own adventure”–style, $3 per five ounce pour; 10 ounces are $4, pints and tulips a buck extra. It might be the Mandarina Bavaria hops adding a citrus note to the current blonde ale on tap, A Fish Called Blonda, and because this is a slice of beer-geek heaven, the yeast selection is listed on the chalkboard, too. A stout in the American style, Thriller packs 8 percent alcohol by volume. It’s hoppy, with a thick, roasted barley and soy sauce ice cream palate.

In the tutti-frutti camp of aromatic IPAs, Mission from Hop is sweet and malty on the finish. My favorite, the Quad-Di-Da-Di Belgian dark strong beer, is clean, ripe and juicy with black licorice, tamarind and banana, and bodes well for the funky beers now napping in cooperage. At 9.3 percent abv, it’ll make you want to curl up in a barrel and wait it out, too.