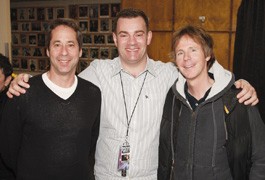 All’s Not Well at Wells

We always look forward to seeing Rick when we come through.

Due to a gag order on staff, determining why he is no longer with the WFC is something of a knotty endeavor; Bartalini was unable to comment on the change. What is known is that staffers, board members and even artists and their management are stunned. Where this leaves the North Bay’s most prestigious performance house, recently placed in Pollstar’s ranking of the top 60 theaters worldwide, is still to be determined.

WFC public relations manager Kristi Buffo said, “I can’t even confirm he was fired.” Buffo could confirm that the change was not a cost-saving effort and that Bartalini’s former assistant, Chrissy Hall, will take over his role as the entertainment programmer for the center, with Anita Wiglesworth, director of arts and education programs, now overseeing all booking for the nonprofit.

WFC board member Darlene Walley, who has served the nonprofit for three years and who helms the ballet company associated with the center, resigned last week. “It was over the reasons for letting Rick Bartalini go,” she stated. “I can’t really say more. We’re all under a gag order.

“My love for the center drove me to resign,” Walley continued. “I love all the staff there, and Rick Bartalini is a huge part of that. I think that his departure puts the center at risk. As a board member and as a one who contributes financially to the center, I feel that he not only does a fabulous job with the center’s shows, but I also saw him first-hand interacting with our donors, honorary board members, prospective board members—if we had someone who wanted to interact with the center, he helped us. He helped us in all different areas of the center’s mission. He’s a great team member. He’s helped all members of the staff.”

Bartalini, a Santa Rosa native who previously worked at San Francisco’s Winterland Productions, says that he turned down offers to come on staff at the former LBC three times before assenting in 1998. “It all came full circle,” he said, “I came back to Sonoma County because I had unfinished business here. I had something I wanted to prove to myself.”

Known for his outsized personality and a keen attention to detail, Bartalini has been instrumental in making the rather dreary former church in northern Santa Rosa a regular stop for such national acts as Lyle Lovett, Johnny Mathis, Olivia Newton-John, Juan Gabriel, Diana Krall, Elvis Costello, George Lopez, Keith Urban and Ellen DeGeneres. It was his booking of DeGeneres in 2002, just after her career had imploded over her revelation of homosexuality, that really kick-started a decade-long slate of superstar talent.

According to Bartalini, DeGeneres and her girlfriend at the time had been camping in Big Sur just before coming north to perform here. To welcome the two, he had their room filled with spa products and other comforts best welcomed by those just coming off the campground. DeGeneres responded with a handwritten thank-you note and, when pal Kathy Griffin was looking for a venue to film her 2007 HBO special, recommended the WFC. During a busy two-year spate, Bartalini successfully negotiated deals with HBO that resulted in Dana Carvey, Lisa Lampanelli, the late George Carlin and, indeed, Kathy Griffin all recording live shows at the WFC. When Dolly Parton was booked in 2007, the WFC was not big enough to hold her stage set, so Bartalini transferred the concert to the Sonoma County Fairgrounds and staged a lavish pink-hued tribute to the country queen for a Valentine’s concert. He paired Kris Kristofferson with Merle Haggard in their first live performance together, handling and calming Haggard when he got cold feet and almost pulled out. And so on.

Artists and their managers credit Bartalini with thinking of the small touches that make a long tour more manageable and make them more willing to return.

Sheila Groves, until recently the talent buyer for the Mystic Theater in Petaluma, said, “My feeling is that it’s his personality that’s brought acts to that venue. He goes out of his way; you feel like you’re coming to Rick’s home when you play there. He goes over the top with taking the personal care and interest and finding out what the person’s likes or dislikes are. If an artist brings a dog, he buys a dog bed and the dog’s favorite bones. Most promoters don’t do that. I don’t think that [the Wells Fargo Center] realize that it’s because of him, personally, that the big acts come.”

Bartalini’s departure raises many questions for North Bay concert-goers, not the least among them being the viability of the Wells Fargo Center. A source close to the center who spoke only on the condition of anonymity said, “If the hardest working man in show business can get fired, then anyone can, you know? We’re all very heavily invested in the place, we want to see it survive and I know the community does, too.”