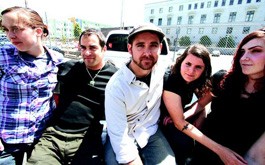 Ash Scheiding, who lived across from the Bohemian offices for years and who possesses one of the most hypnotic voices ever to grace a Sonoma County stage, has a new band. That’s not news, at least to those who have followed her immense talent—Scheiding has generally kept a band, or a band name, for a year or two before moving on. One could say she trades up. Her latest, Kindness and Lies, is Sheiding’s best band yet, owing largely to the strongest songs she’s ever written. “I feel really solid about this band,” she told me recently. “I have good feelings about us working together for quite a while.”

Good feelings abound on the band’s newest EP Look Up Now, featuring “Rosa,” which addresses the emotions on packing up and finally leaving Santa Rosa. Where Scheiding’s new songs are more straightforward, “Rosa” contains all the elements that make this band great: Betsy Adams’ tasteful guitar, Niki Marie’s perfect harmonies, and as always, Scheiding’s voice, which sounds like a thousand hearts breaking. “Will the next thing, next phase, look anything the same?” she sings. “Will I stop referring to you as home?”

Home—it’s a concept by which Brian Moss measures his life; with his acoustic project Hanalei, he often sings of returning there from some upheaval or another. Hanalei’s upcoming album One Big Night was even recorded entirely at home, using only the internal microphone on Moss’ laptop. (It does not sound like crap.) Sad songs in happy, major keys are Moss’ forte—though the words point to last night’s debauchery, the light, finger-picked guitar lines herald a new dawn with eyes slowly adjusting.

Moss, who grew up in the Bay Area before moving to Chicago and founding seminal post-punk band the Ghost, still sings of the Midwest as if the whole thing were a mixed relationship he still hasn’t untangled. “Twilight Gleam” memorializes “the apathy of I-80 and the promises of Dan Ryan,” the expressway around Chi-town. The apathy of I-80? If you’ve ever driven across the country, you know what he means.