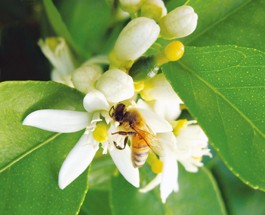 A War on Bees?

Seedless citrus growers face off with beekeepers in what is more than just a farming issue; it's a civil rights issue

DOING WHAT COMES NATURALLY: Bee cross-pollination can result in seedless oranges with seeds. Farmers and apiarists are at odds over the solution.

In the San Joaquin Valley’s citrus belt, seedless mandarin growers and beekeepers have been deadlocked since 2007. It was just two years ago that citrus farmers began finding seeds in their supposedly seedless fruit. It’s the bees’ fault, they have since argued, for cross-pollinating their seedless trees with other nearby citrus varieties.

Citrus farmers and industry reps have demanded that beekeepers leave or at least stay away while trees bloom in March and April, but many beekeepers have refused. They argue that not only have they been welcomed in the citrus belt for decades, but also that citrus pollen and nectar provide nutrition crucial to their colonies. Now, as some mandarin farmers protect their trees with fine-mesh netting while others anticipate another ruined crop, the outcome of the matter remains in the air.

Serge Labesque says the farmers themselves are at fault. Labesque, a teacher of beekeeping at Santa Rosa Junior College, believes farmers had this all coming from the moment, about 10 years ago, when they first planted seedless murcott mandarins, a variety then new to the state, in close proximity to their seedless clementine mandarins. When the pollen of these two varieties mingles, seeds appear in the fruits of each, which often reduces the crops to fruit juice status.

“The farmers just needed to do a little basic homework before the planting of the trees,” Labesque says.

Murcotts, he adds, have been grown for many years through much of Europe, and the techniques for keeping the fruit seedless are well-known: farmers must give consideration to the existing bee population, the types of citrus already planted and the availability of other possible bee forage during the seedless citrus bloom, because if there is nothing else to eat, the bees will come from miles around for the citrus blossoms. California’s farmers failed, however, to appropriately distance their murcott plantings from the varieties that produce compatible pollen at the same time, and today roughly 25,000 controversial acres of mature seedless mandarin trees grow in the citrus belt. Another 7,000 acres will come into production in the next three years, and the situation is almost certain to intensify.

The problem stems from 1998, when a freeze destroyed most of California’s citrus crop. During that season, Spain edged its way into California’s market with its seedless mandarins.

“Then, in ’99 and 2000, when the next crop of navels and Valencias came around, all of a sudden no one wanted them,” explains Joel Nelson, president of California Citrus Mutual, a citrus growers trade organization. “Everyone wanted seedless fruit.”

So out came the oranges and in went the seedless mandarins. According to Nelson and other industry captains, they planted the trees in what they believed were sufficiently isolated locations. In other cases, they ringed their seedless groves with navel orange trees, whose pollen is sterile when mingled with murcott blossoms. The hope was that the navels would serve as buffer and keep the bees from the murcotts.

But the bee population has proven too intense, says Nelson.

“We knew this could be a problem. We just didn’t expect it to happen to the extent that it has.”

But Los Banos beekeeper Gene Brandi, also the legislative chairman for the California State Beekeepers Association, says he knows of some farmers that took no avoidance strategies whatsoever. The citrus-growing giant Sun Pacific, for one, planted some of its murcott trees adjacent to its clementines, according to the company’s vice-president of sales Barney Evans, and Labesque and others suspect that at least some citrus farmers assumed that, when the time came, they could easily boot the bees from the area.

In fact, farmers tried in 2007 to implement radial “no-fly zones” of two miles surrounding all murcott plantings, which would have eliminated bees from most of Kern County, says Labesque. Beekeepers relented. Later that year, Assembly Bill 771 mandated that beekeepers and farmers come to a reasonable solution. This year, the state Department of Food and Agriculture entered the fight with a set of proposed regulations, currently undergoing a public comment period.

If they become law, the regulations will require that beekeepers pre-register their hives in specific locations before the late-March murcott bloom. Farmers who dislike certain placement plans would then have the opportunity to object and suggest suitable alternative locations where the bees could still find ample flower forage. According to the proposed regulations, persisting disputes would eventually go to the hands of the county agricultural commissioner, who Labesque fears will side with the farmers more often than not.

He warns that if farmers win this fight and succeed in bumping bees not only from their own land but from nearby properties as well, the ramifications could be devastating for honeybees everywhere.

“It’s more than just citrus versus bees. It’s a civil rights issue. This could set a very dangerous precedent, and if citrus farmers can force bees off their lands, other farmers might want to do the same.”

Partners for Sustainable Pollination, based in Santa Rosa, was officially founded in July 2008 in answer to what executive director Kathy Kellison sees as an increasingly bee-hostile environment of rural and urban America. Kellison believes that consumers must understand the issues facing bees and, given a choice, place their dollars in the hands of those farmers who provide ground cover forage for bees and otherwise strive for coexistence pollinators.

“People need to realize how hard it is for beekeepers to properly nourish their bees,” says Kellison. Honeybees depend upon access to a multitude of plants for a nutritionally complete diet, she explains, and the heavily monocropped farmlands of California provide a challenge for beekeepers trying feed their colonies. As a result, they must move their bees regularly through the year while staying alert to pesticide spray schedules.

Partners for Sustainable Pollination is now in the midst of developing a “bee-friendly farming” certification program which, like the familiar USDA organic program, would award a product stamp to farmers whose practices meet a strict code of ethics. But for the stamp to carry any significance, it must be recognized and understood by consumers, and while colony collapse disorder has been widely covered by major media, says Kellison, bees and politics is a new yet urgent issue. Though some wineries and other local landowners have taken efforts to turn their properties into bee havens, much of the rest of the world is going the opposite direction, she says.

Now, in Kern, Tulare, Madera and Fresno counties, a small proportion of the mandarin groves are being netted to keep the bees out as the flowers bloom. For beekeeper Steve Godlin, who has placed his hives in local orange groves for more than 30 years, the effort comes as a great relief.

“I realize that we can work together. It means they can still have a seedless product and I can still go to the orchards and make honey.”

But Nelson says that there isn’t enough nylon to go around. There is only sufficient netting currently available to cover roughly a fourth of the seedless mandarin trees in the citrus belt. Plus, the nets are expensive; only large corporations can afford them, says Nelson, and small family farms will likely be left exposed.

“The netting is not a solution. All it does is put more pressure on the balance of the industry and leaves the guy with a hundred acres that much more vulnerable to cross-pollination issues.”

California’s Right to Farm Law (Civil Code section 3482.5) protects established farming operations, including beekeepers, from nuisance claims. Citrus growers and beekeepers have both argued that they fall under the law’s protection. If farmers win this battle, it could mean war on bees.