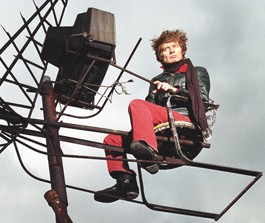 It’s a little coincidental that The Venture Bros. creator Jackson Publick came up with his ambitious Adult Swim cartoon while listening to JG Thirlwell’s Steroid Maximus, since Thirlwell, best known as the sole member of Foetus, would eventually conjure up music for Publick’s show that’s probably best described as a cartoon score on steroids. The compositions definitely fit in with an animated aesthetic, but they’re far from the cheesy, haphazardly recorded synth music meant only to run in the background of a seizure-inducing fight scene.

Like all great scores, Thirlwell’s work for The Venture Bros., whose third hilarious and mythology-expanding season has just been released on DVD, enhances the mood of scenes and generally keeps things moving along. It also stands on its own as unique and exciting piece of music, jumping betweens styles and eras effortlessly and expertly. There’s classical, ’70s funk, lounge, cutting-edge drum ‘n’ bass—the list goes on and on. Thirlwell is at his best when mixing his varying ingredients together seamlessly, blending classical instruments and idiosyncratic genres such as “circus music” with his own signature, modern electronic feel. There are nods to prior film score work from the masters; John Carpenter and Ennio Morricone are the most obvious, with many more for the discerning ear to pick up on.

Narrowing the many bits of music that Thirlwell crafted for three seasons of the show down to 16 tracks was probably no easy task, but the song selection smartly varies between themes that even casual fans of the show will recognize, with tracks that someone who has seen every episode will still feel like they are hearing for the first time. Thanks to Thirlwell’s distinctive composing and musical prowess, the album is equally as accessible and engaging for hardcore Venture Bros. fanatics, cartoon-hating music snobs and everyone in between. Heck, even the cover art is badass.

The Venture Bros.: The Music of JG Thirlwell is available on vinyl at your local independent record store. For those cool enough to love the show but not cool enough to own a record player, a CD version can be purchased through the Williams Street website at www.williamsstreet.com and downloaded digitally at most places digital downloads are downloaded.