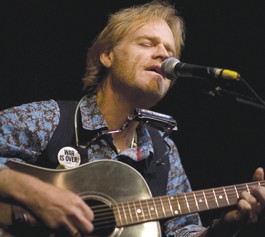 The Lost Gonzo Band—the genre-bending ensemble of Texas stalwarts that accrued a measure of renown side-kicking with Jerry Jeff Walker through the 1970s and beyond—was far from Bob Livingston’s mind as he traversed southern India in 1981. Rather, a new direction in his musical journey appeared. Acting on a tip from a fellow American traveler, Livingston applied for a job with the U.S. State Department.

“I wanted to do a history of American folk and country music,” he recounts laconically by phone from Austin, “’cause they’d never heard of Willie Nelson or Hank Williams over there.” An audition was arranged before a public affairs officer at the U.S. consulate in Madras. “We started playing, and he was just staring at us,” Livingston remembers. “And about halfway through the third song, he reached down and pulled out a banjo. And he goes, ‘I’ve been waiting for you to walk through this door for a long time.’ He said, ‘I’ll give you the gig if I can sit in.'”

Thus began Livingston’s intermittent second career as a guitar-picking cultural ambassador, a gig that has taken him across most of southern Asia, from Oman and Yemen to Pakistan, Nepal, Sri Lanka, and just last year, Thailand and Vietnam. At every stop, he’s sought out traditional local musicians willing to attempt an impromptu hybrid.

When it comes time for a few domestic dates, such as his April 18 show at Studio E, Livingston says he hardly needs to change a thing. “I play the same songs, no matter where I am,” he says. That translates to a rough biographical arc, from his school years in Lubbock to the L.A. sojourn where he hooked up with Michael Martin Murphy and Jerry Jeff Walker. The musicians who became the Lost Gonzo Band coalesced around the two writers, cutting four landmark records in just 18 months, including “Geronimo’s Cadillac” for Murphy and Walker’s breakthrough LP Viva Terlinga.

Livingston spends much of his time these days on a homegrown offshoot of his state department touring, blending classical Indian elements and traditional Americana. Incorporating tabla, violin, Sanskrit chants and even an occasional sitar player, what he calls this new “multicultural extravaganza” has found a ready audience in Texas schools, which have even developed an accompanying curriculum. It’s a musical mix Livingston sometimes jokingly calls “ragabilly,” though the slightly more official title for the shows is “Cowboys and Indians.” Which is not as ethnocentric as it might first appear; after all, “there are cowboys all over the world,” Livingston points out. “All it takes is a cow and a boy, and what’ve you got?”