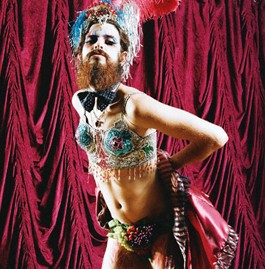 In 2004, Los Angeles&–based music magazine Arthur produced a compilation of songs called Golden Apples of the Sun, a title borrowed from the last line of the W. B. Yeats poem “The Song of Wandering Aengus.” Curated, illustrated and hand-lettered by hirsute folk revivalist Devendra Banhart, the CD featured tracks by winsome harpist Joanna Newsom, Antony (of Antony and the Johnsons), sister-act CocoRosie, psychedelic rockers Six Organs of Admittance and underground legend Vashti Bunyan, and acted as an early rough guide to a burgeoning movement soon to be crowned “new weird America,” or, with increasing regularity, “freak folk.”

Many of the artists on the prescient collection shared an affinity for dramatic singing styles—influenced equally by the ghosts of Billie Holiday, Elizabeth Cotton, Tiny Tim and even occasionally, dare it be said, Alfalfa from The Little Rascals. Banhart was crowned ringleader of this motley group by the music press. It was easy to imagine him frolicking through a light-mottled green wood, spreading fairy dust and leading his community of fellow strange ones toward the misty mountain hop, a pied piper of the ghost of ’60s past.

When asked in a recent interview to describe the sound of his own records, Banhart responded with a Melvillean-extended metaphor that emphasized a vision of himself as only one component in a community of musicians: “Ben Chasny [from Six Organs of Admittance] is the garden, and I’m the snail eating the lettuce in the garden. Antony is a big palm tree with suns instead of coconuts, CocoRosie is the water, and Vetiver is sunbeams. Joanna Newsom is roots that grow upwards, and Espers are your soil covering,” Banhart said, in a loungey West Coast drawl punctuated by liberal doses of you knows.

But when Banhart appears on April 17 at the Mystic Theatre, two days before a scheduled appearance at Coachella, be sure not to mention the term “freak folk” within 50 feet of his flowing beard. “I would be embarrassed to have invented such a tacky term,” Banhart said in a 2007 interview with Rolling Stone magazine. “I have my own definition of folk,” he continued, “the way I look at it is shattered. Folk really is music played for the people, by the people.”

Born in Texas and raised by his mother in Venezuela, where he learned the Spanish language in which he often sings, Banhart later attended the San Francisco Art Institute. While in San Francisco, the budding guitar player lived in the Castro with a gay couple he called “Bob the Crippled Comic and Jerry Elvis.” His first official gig was singing the gospel hymn “How Great Thou Art” and Elvis Presley’s “Love Me Tender” at their wedding, and life has been uphill for Banhart since. His albums have been well-received by the independent press and audiences alike, garnering Banhart a fame that he parlayed into a cameo role in the indie teen film Nick and Norah’s Infinite Playlist—not to mention a short stint as actress Natalie Portman’s boyfriend.

A period of time spent living and recording in Topanga Canyon, where Neil Young, the Doors and Joni Mitchell spent their formative years creating new sounds inspired by the bent mysticism of ’60s Southern California led to the recording of the 2007 XL Recordings release Smokey Rolls Down Thunder Canyon, Banhart’s most critically acclaimed record to date.

Banhart’s music has continually evolved over the years, transforming from goaty-throated folk tunes like “Little Yellow Spider,” which pays homage to squid, crows and pigs; the catchy, Os Mutantes tropicalia of “Carmensita”; the soulful “Seahorse” from Smoky Rolls (“I’m high, I’m happy and I’m free”); to the recently released cover of “Forget About Him,” a lovely, simple tune written by obscure folk-blues singer Kath Bloom in which Banhart channels a bit of Mick Jagger doing a vowel-laden jig over an organ-heavy jam.

These days, it appears Banhart has strayed further from the folk-yeah energy of his early recordings for his newest material. He claims that a certain recording on his to-be-released new album has the “weird vibe of cowboy songs” while another rests on an ’80s-style electro-pop beat reminiscent of Hall and Oates’ “I Can’t Go for That.” Eclectic sounds from Devendra Banhart? We should expect nothing less.