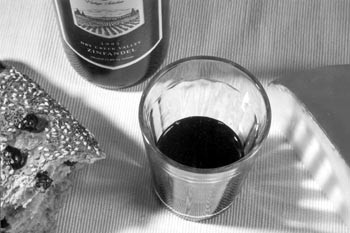 And Thou: A glass of wine, a loaf of bread, and wow.

STEMWARE is for sissies. Or so Italian makers of vino de tavola would have you believe. Real wine drinkers drink their daily quaff from tumblers. When your shirt’s wet with field sweat and vineyard dirt forms black crescents beneath your fingernails, you don’t want to pick up your lunchtime red in a delicate bowl supported by a stiletto heel made of glass. Your calluses alone would chip the glass.

But drinking zinfandel from tumblers is not a hot new trend. Winemaking in Sonoma County by Italian-descent families is one of our region’s oldest industries. Andrea Sbarboro, a native of Genoa, created the Italian-Swiss Colony cooperative near Cloverdale in 1881 as a social experiment to provide steady, dignified work for the large numbers of Italian immigrants arriving in California.

By the turn of the century, the colony’s facility at Asti produced more table wine than any other winery in California. Varietals included zinfandel, carignane, mataro, barbera, pinot noir, and a handful of whites.

The Simi family built its winery in Healdsburg and began making impressive wines in 1881. The same year, Peter and Julius Gobbi established their Sotoyome Winery nearby. Along the Russian River, the Arata family began tending zinfandel vineyards in the mid-1880s.

Sbarboro’s socialist experiment at Italian-Swiss Colony ultimately failed; by the 1960s the colony name was associated with cheap, simple wine advertised on television by the “little old Italian-Swiss winemaker . . . me.” But the Simis held on, as did the Sebastianis.

After Prohibition’s repeal, several other Italian families settled in the county to make fine wine, and the result is a tradition–arguably more noble here than anywhere else in the United States–of excellent working-man wines, particularly reds.

Here are three zins from Sonoma County made by some of our best-known Italian-heritage wineries, rated on a four-star system (one star is drinkable; four stars unforgettable):

Trentadue 1993 Sonoma County Zinfandel
JUST IN CASE your Italian’s a little rusty, Trentadue’s label displays the meaning of the family name, “32.” The winery is located at the top of the Alexander Valley north of Healdsburg, but the label does not indicate if the grapes for this fine zinfandel come from the 250 acres in the valley that the family farms. No matter. Like the Pedroncelli, this is another smooth, delicious everyday drinking wine. I’m especially attracted to its nose, cedary as a cigar box. I find the flavor a bit too simple, but others might appreciate its guilelessness. This is an ideal lunchtime or casual wine, the kind of stuff Don Corleone poured to soothe the souls of supplicants in his office begging for favors. Pour a glass for your friends as you hand them a plate of pasta or make them an offer they can’t refuse. Two stars.

Seghesio 1995 Sonoma Zinfandel
THIS WINE is soft on the corners but strong and forthright in the center. The Seghesio family style is intentionally focused on fruit to intensify zinfandel’s natural berry flavors. In this particular vintage, tannins seem closer to the middle of the taste than to the edges, unusual for a red. I suspect that means that this is a wine to drink now–wait too long and those tannins will disappear, leaving the fruit without any structure to lean on. But you will want to drink this zinfandel now anyway: It’s begging to accompany your Indian summer barbecues, especially the red meats. Two-and-a-half stars.

Pedroncelli 1995 Dry Creek Valley Zinfandel, “Vintage Selection”
JUST A BEAUTIFUL WINE, as smooth on the tongue as first love is on the memory. Some years ago (well, many years ago), my father gave me a bottle of Pedroncelli zinfandel to very desirable effect: he really liked my first love, Mary. I’m happy to report that nothing’s changed, at least as far as this zin is concerned. The ’95 Pedroncelli is as velvety and fulsome as the ’73. You might smell oak in the nose and taste dark raspberry jam in the body; I smell Mary. Come to think of it, I should send her a bottle. Three stars–four if you knew Mary.