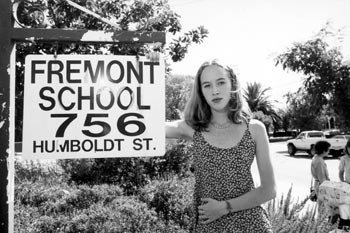 Sign of the times: Oona Risling-Sholl, 16, filed a civil-rights complaint that could have nationwide implications.

I NEVER CONSIDERED myself courageous,” muses Oona Risling-Sholl, 16, running a slender hand through her long, reddish hair. “This has been really hard. I’m lucky enough to have parents who listened, but a lot of my friends have been too scared to say anything.”

Her classmates may have stayed mum, but Oona–a contemplative, artistic girl with delicate features and slight frame–spoke out. As a result, her allegations of sexual harassment at a Santa Rosa school and subsequent lawsuit have packed a punch for school district employees that is being felt throughout the nation.

This groundbreaking case, the first of its kind in the United States, will test whether school officials can be held personally liable for failing to take reasonable steps to stop either teacher-to-student or peer-to-peer sexual harassment. Past cases have held that the school districts, but not the individual teachers and administrators, are legally liable.

Oona claims she suffered both types of harassment five years ago as a sixth grader at Santa Rosa’s J.C. Fremont Elementary School during the 1992-93 school year. She and her parents want to sue the individuals she claims were accountable.

The teenager says she was sexually harassed by a student teacher and by boys in her class. Her civil-action suit alleges that the student teacher fondled her, that male students called her slang terms for “whore” and referred to her body parts as “melons” and “beaver,” and that one boy struck her across the face and told her to “get used to it.”

“[The defendants] had individually failed to protect Oona’s civil rights under Title IX. It was clear they had certain duties that they failed in doing, and also intentionally chose not to respond,” says Oona’s attorney, Desiree Cox. “They never identified the complaints as sexual harassment, which would have triggered their policy.”

Eventually, Oona’s parents sent an official complaint to the Office of Civil Rights in San Francisco. The OCR found severe procedural problems and a hostile environment at the school, says Cox, adding that she hopes the suit will raise awareness. “Hopefully, this will help teachers take their responsibility more seriously, identify sexual harassment, and take steps to stop it.”

Michael Senneff, attorney for the defendants (including sixth-grade teacher and current principal Patricia McCaffrey, former principal Gerald Hill, ex-student teacher Drew Ibach, and director of elementary education Ronald Lundy), did not return a call for comment. However, Bob Henry, legal counsel for Sonoma County Schools and Colleges, says the situation is complex because there are several gradations of liability in federal Title IX provisions. “So it’s a difficult proposition to predict where the law will land,” he explains.

LAST MONTH, a three-judge panel of the U.S. 9th Circuit Court of Appeals in San Francisco unanimously ruled that the Fremont School officials are not entitled to qualify for immunity from the suit, because it was clearly established they had a “duty . . . to prevent sexual harassment of students.” But, a week later, the 11th Circuit Court of Appeals handed down a contradictory decision.

“We’re still studying whether to take an appeal to the U.S. Supreme Court,” says Henry, adding that lawyers, the school district, and the insurance company will decide within the month whether to proceed with an appeal.

A similar case, involving a Petaluma school counselor 18 months earlier, established that the counselor was not personally responsible for failing to prevent alleged sexual harassment. Title IX advocates say that ruling was a warning, and that in the intervening time, the law has become clear enough to implicate individual school officials in current cases.

Oona’s mother, Kate Sholl, claims that after the alleged incidents her daughter became increasingly withdrawn, abandoned her art hobbies, complained of stomachaches, and didn’t want to go to school. When she heard Oona’s claims of repeated sexual harassment and retaliation, Sholl sent several letters complaining about the problem to school officials. She claims that officials told her they would be “on their guard” but didn’t conduct an investigation or write a report. Sholl says that, like most parents, she didn’t how to file a complaint. “I didn’t know there was an official sexual harassment policy and a seven-page form [to complete],” she says.

Linda Purrington of the Petaluma-based Title IX Advocates says one of the main problems is that schools have been suppressing sexual harassment reports. “There are often situations where the school administration does not actually set down complaints on paper, but then everything comes out afterward as more victims come forward,” she explains. “All schools have a sexual harassment policy in place, but there is a tendency to treat sexual harassment as trivial.”

Purrington says it’s important that parents also make a report, documenting the incident, the time, and the date. “The element of documentation is absolutely crucial. In school systems they often know who the problem kids are, but they decide, ‘Let’s not muck up this kid’s record,'” she says. “Sometimes it’s just onerous paperwork. Who wants to be officious and pushy? But it’s crucial, and a dated set of reports becomes a legal document, and a diary is a presentable form of evidence in court.”

Attorney Bob Henry admits there have been problems with schools dragging out complaints and not adhering to procedures. “If they build documentation into the process and build it quickly, they can have a better record to look back on,” he says.

He adds that several school district workshops have advised school officials to act quickly, disciplining or even removing a student, if they become aware of harassment. “I believe the schools in the North Coast have turned an important corner,” he says. “At one time–a year or two ago–there were sexual harassment complaints [within the Sonoma County School District] almost every week. Now, I’m seeing a decline, and administrators are doing a better job of dealing with it quickly.”

Purrington is happy things appear to be changing on the legal front. “We now have tight surveillance in day-care and health-care systems, but schools have escaped the scrutiny. Now the standard of responsibility is getting raised and it’s a good thing,” she observes.

Oona’s father, Ken Risling, agrees: “Children should be given a direct message that there is such a thing as sexual harassment and it will be taken seriously.” If the case goes before the U.S. Supreme Court but is sent back to the Northern District Court, Cox says, it can then be scheduled for trial. She adds that the school district has refused to discuss a settlement.

Meanwhile, Oona has abandoned the public school system and is being home-schooled. She has taken up the cello, regained her interest in art–she’s been invited to design the official logo for the Sebastopol skate park–and is one of the editors of Windchime, a student-produced literary magazine. She says the continuing legal wranglings have been worth it.

“My personal goal was to get the word out that it’s OK to speak your mind,” she says. “It’s scary, but definitely worth it to tell people they’re wrong.”