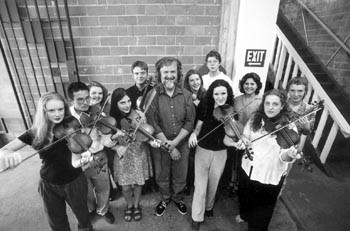 Bow to Greatness: Chris Caswell and students in his Graton recording studio.

MUSICIAN CHRIS CASWELL has been to festivals where the onstage musical stars–technically only a few feet from the audience–might have been miles away, so strong was the implied psychic distance between performer and patron.

However, no such distinction will be in force at this year’s Celtic Music Festival. Held in downtown Sebastopol and nicknamed Celtstock, this increasingly popular annual event comes around for the third time. According to renowned harp-maker and Celtic harpist Caswell, the planners have hand-picked their artists from an international pool of Celtic players with a mind toward minimizing that invisible barrier between performer and audience.

“We’ve worked to make it very hands-on,” he says with a smile. “The ‘unwashed masses’ won’t need to feel so unwashed at this festival.” One of the festival’s original organizers–with colleagues Cloud Moss and Steve Blamires–Caswell describes the roster of musicians, among them a hush-hush, “very special” guest whose identity is being tantalizingly shrouded in mystery, as being “approachable while remaining a world-class line-up.”

Temporarily abandoning his successful harp-building enterprise when last winter’s rains led to the disastrous flooding of his studio, Caswell has nonetheless kept busy. Aside from the festival and such personal musical pursuits as playing with the feisty pub band Road Kilt, Caswell has been developing his talents as a record producer. His label, Gargoyle Records, has undertaken a number of recent projects–including one he can’t stop talking about.

“We just finished recording these kids,” he enthuses. “Well, not kids really–they’re all in their late teens and early 20s, all fiddlers, part of Alasdair Frasier’s Valley of the Moon Fiddling School. We brought them in here and they just blew me away!” The result, to be titled Session: The Future of Celtic Music, will be available around Christmas.

Asked what appeal Celtic music holds for such youthful folks as these, Caswell chuckles.

“It’s very vital, strong, intense music,” he says. “It’s incredibly vivacious. It drives. It cooks. It has the kind of strength that appeals to teenage hormones. A lot of popular music that other kids are aspiring toward doesn’t have the same heart. It’s not as free and openly compassionate as it could be. This music is. That’s the appeal.” Now Caswell is warmed up.

“Take African grooves, and speed them up,” he says. “Then you’ll get some of the intensity that Scottish stuff has, that sweat-on-the-brow intensity, that fire-in-the-eye, almost trancelike intensity you get when you’ve been playing Scottish or Irish reels for hours on end. It transcends age or ancestry. It’s beautiful music.”

Along with the music, the daylong festival will feature a number of ancillary attractions. A half-dozen workshops offering enlightened education on the finer points of fiddling, piping, dancing, singing, guitar playing, and the art of singing sea shanties are scheduled, as well as a favorite from last year: the session tent.

“If you play, bring your instrument,” Caswell encourages attendees. “Listen in, and if you know the tune, play the tune. Sessions are vital to the Celtic tradition; they’re its heart and its center.

“Being on stage with a big fancy band is not the tradition,” he goes on. “In fact, it’s the least traditional aspect of the festival. Bands are a recent phenomenon. Bands–other than those that would play for a wedding or something–are really only a couple of decades old.”

Organizers expect a wide range of people to be drawn to this year’s event, which includes performances on Friday and on Saturday evenings.

“Some come because their grandparents were Scottish or something,” Caswell admits. “But at the core of the group are people for whom the single only draw is the music itself.

“Blood is only blood,” he adds firmly. “But music is music.”

THE THIRD ANNUAL Sebastopol Celtic Festival is a west county highlight Friday-Saturday, Sept. 19-20. Friday: Andy Irvine, Martin Hayes, and Dennis Cahill at the Analy High School Auditorium, 6950 Analy Ave., at 8 p.m.; tickets are $18-$23. Saturday features workshops, kids’ stuff, crafts, and performances by Old Blind Dogs, Craobh Rua, Connie Dover, and others at the Sebastopol Community Center, 390 Morris St., from 10:30 a.m. to 6 p.m.; tickets are $4-$15; kids 6 and under, free. Saturday nightfeatures Alasdair Fraser with Skyedance, Andy M. Stewart and Gerry O’Beirne, and others at the Analy High School Auditorium at 8 p.m.; tickets are $20-$25. For details, call 829-1511 or 829-7607.