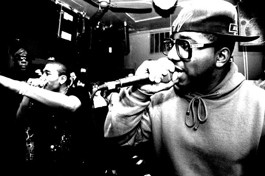 W ith hip-hop music now approaching the age of 30, there’s no wonder that it’s ripe for an early midlife crisis. It’s stopped getting wasted at parties, it’s started its own profitable side businesses, it works hard to provide for its family members and it’s started to wonder if it’s cool anymore. But in place of the sports car and the toupee is hip-hop’s fresh blood. Enter the appropriately named Cool Kids from Illinois, who celebrate hip-hop’s carefree teenage years as a salve against its sagging, responsibility-laden adulthood.

It’s no guarantee that the Cool Kids, who perform at the Independent in San Francisco on Jan. 17, will be the next big thing. They dress too funny and sound too weird to break into a rigid mainstream market. But it is safe to say that after a yearlong trudge through a bog of mature, grownup and outright boring albums from hip-hop’s major artists, the Cool Kids are the ones most likely to reinstate carefree juvenilia as the sweet-tasting endorphin rush that hip-hop so dearly thirsts for right now.

Take the Cool Kids’ “Black Mags,” which accomplishes the thing that an instant-classic song should provide: it makes the listener feel immediately hipper upon impact. With a warbling, burbly bass line and a faraway, thinned-out drum kit coming from the darkest corner of a distant cave, it teases with restraint while lyrically exploring the details of tricking out one’s BMX bike. Two minutes into the song, we finally get the carrot-on-the-stick payoff: sixteenth notes on the hi-hat rush to the forefront as rappers Mikey Rocks and Chuck Inglish rhyme about hitting each other up on their pagers, matching their handlebar grips with their Nikes and getting the girl.

For all of their ’80s nostalgia, the Cool Kids have at least one innovation of the modern day to thank for their existence: they met on MySpace. Though they jokingly describe themselves as the “black version of the Beastie Boys,” the group isn’t necessarily recycling the exact sound of the ’80s (at ages 19 and 23, they weren’t even alive for much of the decade) so much as they’re tweaking it by employing modern production tactics.

In contrast to fellow Illinois producer Kanye West—who’s professionally exhausted the art of the sped-up soul sample—the Cool Kids are all about molasses. Slowed-down vocals laze behind the backbeat in a curious impersonation of an ancient cassette deck’s dirty heads slowing down the tape. Their style sounds akin to Eric B. and Rakim lounging around a 50-gallon drum blasted on morphine, and damn, does it ever sound slick.

Lifting Rick Rubin’s trick of short heavy-metal guitar stabs which peppered the Beasties’ 1986 Licensed to Ill album, “88” is an all-out homage to the day-glo half-shirt era, and it’s a lyrical trip down amnesia lane for those who spent after-school afternoons playing video games at Aladdin’s Castle and watching Yo! MTV Raps on a friend’s cable connection.

Rapper Mikey Rocks, born in ’88, plunders the decade’s fads—is there any other current artist in hip-hop who drops lines about stonewashed Guess jeans, Rob Base, The Fresh Prince of Bel-Air, “The Safety Dance” and the Smurfs?—while the beat changes up about six different times, supplied by a block-party DJ going crazy on the crates, at one point chopping up a few faintly recognizable electronic blips of the Pac-Man theme into a nostalgic four-bar jam of delicious WTF-ness. With all of today’s video-game options, do these guys really think Pac-Man is all that fun to play?

Authenticity aside, there’s another major hurdle of variety for the group: most of the Cool Kids’ songs sound alike, and some of them even quote verses from each other. Ordinarily, this is dangerously self-referential activity for a group without an album out yet, but it seems somehow appropriate for their revivalist bent. The majority of the songs on the Ramones’ debut sound the same, too, but taken together, they strengthen the roots of rock and roll, much like the Cool Kids’ upcoming full-length disc on Chocolate Industries will probably bring back some teenage basics to a confused genre.

The Cool Kids might expand their palette and become a creative force, but more likely they’ll make a great, molten-brown-sugar album and disappear, never to be heard from again. The latter scenario, strangely, is the more attractive one. It’s good to remember that feeling cool is a short, hot flame that only lasts for a couple minutes at a time, a compromised state of hypnosis, and its superficial marriage to an early midlife crisis is always a short one.