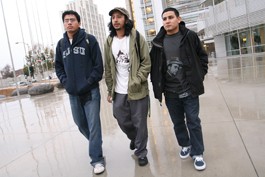 Immigrant students raised in the U.S. 'out' their undocumented status in an effort to get to college

A drian Ramirez was standing in front of a thousand people when he went public about the fact that he is not in the United States legally. The 22-year-old community organizer was in Washington, D.C., speaking to college students at the Campus Progress conference last summer. He calls it “coming out of the undocumented closet.”

Ramirez stole the thunder from Speaker of the House Nancy Pelosi, who spoke after him. His speech earned him a lot of attention, but he would have traded it in a heartbeat to be one of the hundreds of legal resident students in the crowd.

It doesn’t look like that will be happening any time soon. In October, Congress vetoed the Development, Relief and Education for Alien Minors (DREAM) Act, a piece of legislation that would have entitled an estimated 500,000 undocumented youth currently in U.S. schools to receive financial aid for college, and created a path to citizenship.

Frustrated by the lack of any progress on such immigration reform, and unable to participate in the electoral system, undocumented young people like Ramirez are redefining the immigration debate by speaking publicly about their lack of legal status, directly challenging opponents of immigration reform and emboldening others to do the same.

“Growing up, I never told anyone about not having my papers, but one day, just when I finished high school, I just had to tell people,” Ramirez says.

Since that time, he has been writing and speaking at rallies, conferences and in classrooms about what life is like without certain essentials many of us take for granted, like a driver’s license—let alone a college education.

Ramirez, whose parents brought him to the United States 15 years ago, has hit a common ceiling: he cannot afford to go to college because he cannot file for financial aid due to his immigration status.

“I’d just had enough of watching the news go back and forth about immigrants, and just having to sit and listen,” he says. Of all the political events he’s taken his story to, he says the most powerful experience was at a park in the South Bay city of Campbell. The Minutemen had come to recruit volunteers in the mainly white suburb. Ramirez and dozens of other undocumented young people went to protest the recruiting mission.

“Just being able to confront the people that dislike us, being right in their face, felt empowering,” he says. “Plus, them being able to see us—that we don’t fit into the stereotypes they imagined in their heads—was important. We actually outnumbered them so much that they had to leave.”

This new strength in numbers is one key as to why undocumented young people are willing to face scrutiny, loss of a job and deportation in order to speak out.

Cesar A., 21, is a junior at San Jose State University and the community liaison of Student Advocates for Higher Education (SAHE), a statewide campus-based association started by undocumented college students. Even the fact that such a group exists demonstrates the new comfort students feel about publicly stating their status, and the fact that there is a “community liaison” shows their ambitions to communicate their experiences to the larger public. It is not a support group that meets secretly; it is a vocal, media-savvy organization that has staged mock graduations of undocumented students, met with politicians and held a statewide hunger strike for the DREAM Act that received international media attention.

Like many undocumented young people, Cesar didn’t even know that he did not have papers until late in his high school career when he was thinking about college. “I was in AP classes, had a 3.4 GPA, but when I talked to my parents, they told me about the situation,” he says. He was ready to forget about further schooling until his father told him that “if I didn’t want to just work hard labor like he did, coming home late with your back hurting, I had to get an education.”

Cesar went to community college, and found SAHE shortly after transferring to San Jose State. “After 14 years of being in the shadows, you reach a point where you say, ‘I don’t care, I’m fighting for what’s right,'” says Cesar, a hunger striker who says the decision was not hard to make. “My picture and full name were in newspapers, I was on television, and yeah, I wondered if the eyes of la migra were watching, but I figured instead of waiting for others to do for me, I had to do for myself.”

The irony that Cesar is using a very American do-it-yourself ethic to fight against an anti-immigrant backlash that does not consider him American is not lost on him: “The difference with us versus our parents is that we grew up here. I have been hearing for 14 years that everybody in America has inalienable rights. It is that education that makes us fight.”

The group’s public call for the rights of undocumented students has not only brought supporters, but has been a lighting rod for virulent anti-immigrant anger that now has faces, names and organizations to target. When SAHE and a number of other undocumented student groups across California held their hunger strike, popular ultraconservative shock-jock Michael Savage told his listeners, “Let them fast until they starve to death.”

The student groups launched a series of protests against Savage, but his attacks only got more vicious. “I was still weak from the fast,” says Cesar, “and didn’t pay attention to the starving thing, but then he said, ‘Go make a bomb where you came from.’ How can he call students who just want an education terrorists?”

Fellow SAHE member Francisco Alvarado, 25, now has his citizenship, but took a route he wants other undocumented youth to avoid. When his temporary visa was expiring, Alvarado went into the military to qualify for permanent residency. He served three years in the army infantry division in Hawaii.

Alvarado says many immigrants just like him make the same decision. “We grow up thinking immigration status is taboo,” he says. “Most of my friends and I just had this mutual understanding.”

Alvarado now gives presentations to undocumented high school students. “After our workshops, we usually have a handful of students who come up to us, tell us they are undocumented and want to share their story, but also want to get involved.” He says students have started their own chapters across the state and the country.

Le Tim Le, program coordinator for the Partnership for Immigrant Leadership and Action, an organizational development and training agency based out of San Francisco, says groups like SAHE can generate momentum for the immigrants rights movement out of the sheer boldness of their actions. “What’s striking is the risk that they’re taking. But their pronouncement may be a catalyst like the power movements of the ’70s—like the concept of ‘black is beautiful,’ their coming out could remove the isolation and draw more people in.”

When asked about the failure of the DREAM Act, Cesar, Alvarado and Ramirez say they expected as much. They’re not convinced that change can happen outside of their own actions, and have turned to their own community to lead the way on immigration reform.

Just like his parents before him, Cesar says undocumented youth are working for the next generation.”Our actions might not produce an immediate victory,” he says, “but down the line other undocumented youth will be able to look to us and say, ‘I can do that too.'”