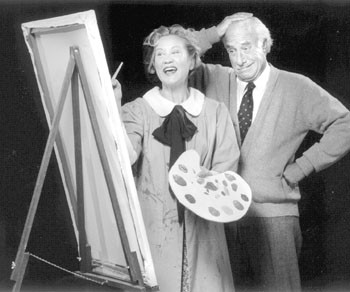 ‘You Can’t Take It With You’

‘You Can’t Take It With You’ still offers relevant moral

You have to like the Pacific Alliance Stage Company’s You Can’t Take It with You for the sweet production the company makes of it. Written by Moss Hart and George S. Kaufman, the play is about a family and its friends who ignore the outside world’s pressures in order to enjoy life as it presents itself. You Can’t Take It with You still works because much of what it says is still true and because Pacific Alliance’s casting and directing are superb.

Today’s audience, baby boomers especially, hardly needs to be told to enjoy the present. But our enjoyment often turns out to be spurious, and this is a reason why the play remains relevant.

In contrast to the Sycamore family, we spend money instead of time and watch others live their lives on television instead of living our own. And though we don’t postpone indulging ourselves and our whims, we still don’t allow ourselves to follow our interests or to step off the track to do so. Perhaps we can no longer afford to do so, of course, and here lies the weakness of the play’s pertinence: The family’s grandfather (played by Robert Parnell) owns rental property and can support everyone modestly.

The family is meant to appear eccentric: They welcome all visitors, treat their black servants kindly, and each family member has a hobby he or she spend the days enjoying. All lack talent, but no one considers that an obstacle to enjoyment.

The conflict arises when one of the daughters, representing the real world (she works in a bank and has no hobby), becomes engaged to the banker’s son whose conventional parents disapprove of her family.

Contemporary audiences may not find the conflict as compelling today as it must have appeared in 1936, when You Can’t Take It with You was written (the play won the Pulitzer the next year) and when those with a job and even a little money stood out in stark contrast to those who had neither.

It was also a time when one’s appearance of respectability helped one find a job and social acceptance. But today, the Sycamore family’s eccentricities are neither shocking nor particularly interesting, although the ballet daughter’s wobbly dancing and the father’s fireworks explosions in the basement finally make us laugh.

And though class division certainly endures today, the division seems to matter less with the rise of the middle class and its compensatory material distractions.

The Pacific Alliance production works because director Michael Grice plays it straight, without sentimentality or flash, and with faith in the material. The cast, especially Parnell, with Meg Mackay as Penny Sycamore, an aspiring playwright, and Will Marchetti as fireworks maker Paul Sycamore, make the family as believable and genuine as the material allows. More importantly, they make the family likable champions of the play’s moral.

This production might be considered low-key, but that has more to do with our own speediness and high shock threshold. You Can’t Take It with You builds its own momentum through its consistency and revelations.

And–surprise, surprise–many of the buttons the play pushes function in us still. Who among us does not enjoy seeing the snooty humbled, having a Russian countess over for dinner, or seeing our daughter marry well?

At the end, the Sycamores all sit down to dinner round the table, that icon of family stability and security, which, when there is love and kindness, is still just about as good as life gets.