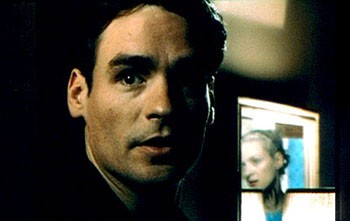 ‘Tape’ is an aggravating farce

It used to be said of Truffaut that every other movie by him was worthwhile. In following the magical Waking Life with the deadly Tape, Richard Linklater upholds that tradition.

This shot-on-tape picture is set in a room at the Motor Palace Motel in Lansing, Michigan. Johnny (the ever juvenile Robert Sean Leonard), a third-rate independent filmmaker in town for the Lansing Film Festival, drives by to visit Vince (Ethan Hawke), his friend from high school, who has become a half-wrecked drug dealer.

The two men have a bone to pick: Ten years ago, Johnny injured a woman, Amy (Uma Thurman), they both knew. Amy is about to make a surprise visit to the motel, much to Johnny’s discomfort. She’s now an assistant district attorney, so if she wants legal revenge against Johnny, she’s in the position to get it.

Linklater needed a young John Malkovich, or even a Matt Dillon, to play Vince. He got the aristocratic Hawke, as spuriously working-class as the temporary tattoos on his shoulder blades. Also too well-bred is Thurman, the injured woman.

Ah, but was she injured? Is Johnny exaggerating the night in question? Has the drug-addled Vince dreamed up the tale? I hate truth games. Couldn’t we just play Scrabble?

Thurman’s Amy seems like what she is: a celebrity descending into the world of underground film. Grilled by these two men, she gets a dreamy, half-amused-half-contemptuous look, as if she were on the David Letterman show and Dave had just asked her a rude question. Linklater should have hired someone a little less glamorous. (Thurman is Mrs. Hawke; they were a package deal.)

Wouldn’t a DA–assistant or otherwise–have a professional dislike for the kind of lies flying around this dingy room? Even the most inspirationally challenged film director learns some elementary people manipulation skills. Where are Johnny’s? Also, I think your average drug dealer has enough common sense not to invite an assistant DA into a room full of marijuana smoke, no matter what presumption he might have of friendship from 10 years ago.

Linklater keeps the film from being visually claustrophobic; it’s just the acting and the material that make you yearn for fresh air. The film has a clammy, painful subject, just right for some dangerous drama. Ariel Dorfman’s frightening play Death and the Maiden offers almost identical material, for example.

Tape, however, is stifled by its iron-clad concept. For most of the script (written by Stephen Belber and based on his one-act play), Johnny is a guilty man. He’s certain of what happened that fateful night. Wouldn’t it have made more drama if he’d been too drunk and didn’t know for sure?

Tape is essentially a malformed child of Sam Shepard’s True West: the adventures of two brothers (here, best friends) gnawing at each other about their pasts. Tape may be seriously intentioned work, but it’s essentially frivolous. It’s akin to the breed of aggravating farces wherein 15 seconds of conversation would untangle the mess.