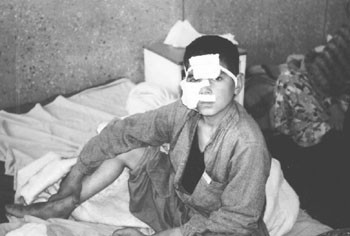 My fantasy of the week: Donald Rumsfeld meets a young Afghan boy named Noor Muhammad. At the start of the daily Pentagon press briefing on Dec. 4, the defense secretary delivered a short lecture on the subject of civilian casualties in Afghanistan. “One of the unpleasant aspects of war is the reality that innocent bystanders are sometimes caught in the crossfire,” Rumsfeld said, “and we’re often asked to answer Taliban accusations about civilian casualties. Indeed one of today’s headlines is, ‘Pentagon Avoids Subject of Civilian Deaths.’

“The short answer,” Rumsfeld continued, “is that that’s simply not so.”

He then proceeded to prove, in a way, the offending headline’s point.

“With the disorder that reigns in Afghanistan, it is next to impossible to get factual information about civilian casualties,” Rumsfeld said. “First, the Taliban have lied repeatedly. They intentionally mislead the press for their own purposes. Second, we generally do not have access to sites of alleged civilian casualties on the ground. Third, in cases where someone does have access to a site, it is often impossible to know how many people were killed, how they died, and by whose hand they did die.”

Look at the World Trade Center, Rumsfeld declared. The number of dead there keeps shifting.

“If we cannot know for certain how many people were killed in Lower Manhattan, where we have full access to the site, thousands of reporters, investigators, rescue workers combing the wreckage, and no enemy propaganda to confuse the situation, one ought to be sensitive to how difficult it is to know with certainty, in real time, what may have happened in any given situation in Afghanistan,” Rumsfeld said.

“What we at the Pentagon try to do is to tell the press what we do know that’s accurate, and we try to say what we don’t know,” he continued “We lost thousands of innocent civilians on Sept. 11, and we understand what it means to lose a father, a mother, a brother, a sister, a son or a daughter, and we mourn every civilian death.”

Rumsfeld’s remarks, seemingly heartfelt, were actually an exercise in profound cynicism. If we can’t count the dead in New York, how can you expect us to know anything about civilian casualties in Afghanistan? The defense secretary portrayed it as an impossible task, and he suggested that claims of civilian casualties were only coming from Taliban scumbags. Of course you can’t believe them.

But as Rumsfeld was talking, Washington Post reporter Susan Glasser was filing a piece based on a visit to Jalalabad’s Public Hospital No. 1.

In the previous four days, the hospital had taken in 36 patients who said they were victims of the U.S. bombing strikes targeting villages southwest of Jalalabad, in an area where Osama bin Laden and al Qaida remnants are thought to be hiding in cave compounds. The hospital had also received 35 dead.

One of the injured was Noor Mohammed, who had lost both eyes and both arms.

Noor, who is somewhere between 10 and 12 years old, told his uncle he heard the sound of an airplane overhead, ran from his room, and did not know what happened next.

Asked how he felt, the boy whispered, “I feel cold and I cannot talk.” Glasser found other wounded children from families who claimed they had been struck by bombs while in their mud houses.

Two days earlier, the New York Times had run a dispatch (in a not-too prominent spot) from Tim Weiner, reporting that, according to witnesses and local officials, U.S. bombers flying over this area of Tora Bora had struck three villages, killing dozens of civilians. Weiner quoted the local law and order minister and the region’s defense minister, who each maintained such attacks had occurred. Survivors interviewed by Weiner spoke of horrific devastation in these areas.

“The village is no more,” said a man named Khalil. “All my family, 12 people, were killed. I am the only one left in this family. I have lost my children, my wife. They are no more.” Another survivor said she had lost 38 relatives; another estimated up to 200 were dead.

The Pentagon denied everything. Weiner quoted Rear Admiral Craig Quigley, chief spokesman for the Central Command, asserting that American bombers had hit their targets 20 miles away from these villages: “If we had hit a village causing widespread death that was unintended, we would have said so. We have been meticulous reporting whenever we have killed a single person.” (Interest declared: Weiner is a friend. He can be trusted to suss out a difficult situation.)

The day after Weiner’s account appeared, at the Pentagon briefing, Rear Adm. John Stufflebeem was questioned about the reports of civilian deaths around Tora Bora. He replied, “I have seen the press reports about alleged civilian casualties, and I would just ask us all to remember that this was orchestrated by the Taliban, and therefore it’s not clear to us in fact were there innocent civilians who in fact may have been injured.” (Note the double “in fact.”)

The Dickensian-named admiral added, “We know for a fact that these were legitimate military targets in that area that were struck. We know that there was terrific traditional, consistent planning to ensure that only these targets were struck. We know there were no off-target hits, so there were no collateral damage worries in this series of strikes. And therefore I can’t comment on the civilian casualties because I don’t know them to be true.”

A few moments later, he added, “I find it a little bit suspect to hear that villages are being flattened.”

Yet Richard Lloyd Parry, a reporter for the London-based Independent, visited the area and found homes replaced by craters, a cemetery containing 40 freshly dug graves (some, he was told, contained only body parts), and a fragment bearing the words “Surface Attack Guided Missile AGM 114.”

Truth is often difficult to ascertain in war. But it is clear that Stufflebeem and Rumsfeld were not speaking truthfully. The reports of these casualties were not “orchestrated by the Taliban.” In fact, as the admiral might say, the information was coming from officials of a government that replaced the Taliban.

What, then, to make of Noor Muhammad and his tale? And the others who tell of hearing airplanes and being bombed in their homes?

If Rumsfeld and Stufflebeem are to be believed, it must be that Noor and the rest were all participating in an elaborate and sophisticated propaganda campaign that entailed faking craters, persuading anti-Taliban officials who are working with American forces to lie to benefit the Taliban, enlisting dozens of persons with God-awful injuries for the con, and encouraging children to tell false stories about how they came to be harmed.

The reports filed by Weiner, Glasser, and Parry demonstrate that Rumsfeld was engaging in champion dissembling when he maintained the Pentagon cannot possibly keep track of civilian casualties in wild and wooly Afghanistan.

The U.S. military may not be able to discern figures with the same precision it claims for its bombing. Yet in many instances it can determine if civilian casualties have happened by doing what Weiner and the other reporters did: asking people on the ground.

Instead, in this latest episode, the Pentagon rushed out a denial that does not hold and then further insulted local Afghan officials and survivors by dismissing their reports as Taliban disinformation–and waited for that news cycle to whiz by.

I would like to watch Rumsfeld and Stufflebeem tell the eyeless and armless Noor Muhammad he’s lying.

It is not, as Rumsfeld asserted, “impossible to get factual information about civilian casualties.” His military just hasn’t bothered. It could start by sending someone to interview Noor and his fellow survivors.

David Corn is the Washington editor of The Nation.