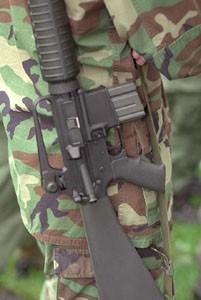 Resplendent in his spiffy, new Northern Alliance hat and shiny Pancho Villa ammo belt and matching AK-47, the soldier tiptoed through what some guys from Badakhshan said was a minefield. Well, he had to take a leak, and what could they know of Takhar or its mines?

Safely relieved, he wanted to know my age.

“Thirty-eight. How about you?”

Salt-and-pepper hair, definitively receding. Not just eye bags, but wrinkles. Subtly hard facial angles; not a gram of baby fat. I thought 42. I said 36 to be polite.

Middle-aged teenagers shouldn’t come as much of a surprise in a country with an average life expectancy of 43 (considerably less for frontline troops). But when you spend just a few weeks living the same toxic lifestyle as these poor and unlucky souls, it’s amazing that they live as long as they do.

All things considered, I lived considerably better than the average resident of Taloqan, Afghanistan, where I lived for a couple of weeks. For one thing, I was willing and able to pay the extortionist rate of five bucks for the sticks you burn to boil bath water in an ancient tin stove. A hot-water hamam goes a long way toward improving your outlook after a night spent watching bombs fall far too close to your home address.

And call me a spendthrift if you want, but I always sprung for the 60-cent horse-drawn cart ride across town. Most Afghans didn’t.

Otherwise, there were few indignities or inconveniences that my Amex, Visa, or carefully concealed wad of crisp hundreds could ease, much less eradicate.

Like most Afghans, I slept on a filthy mat along one wall of a freezing cold room containing stinky said mat on top of one astonishingly dirty red carpet.

The foul stench made sleep nearly impossible; strange rashes spread among the press corps. Afghans, when asked about this, shrugged and pointed to their own scary blotches.

Though as an infidel I was technically exempt from the 5 a.m. to 6 p.m. Ramadan fast, the only way to sneak a snack without causing the highly armed locals to take offense was to stay home and pay a kid to run to the bazaar. Since I was always out and about, like other journalists I observed a de facto Ramadan fast.

Think it’s easy? Try it yourself: Move to Arizona and go all day without a sip of water; the principal difference is that Afghanistan is drier and dustier.

Don’t get the idea, though, that breaking out that dinnertime flatware after an all-day fast is a big treat. Most people here survive on a vegan-unfriendly diet of fatty kebabs and water drawn from the natural goodness of the gutter on the side of the road.

When I hungrily inquired about a few plump ducks splashing around in Taloqan’s communal bath/drinking fountain/toilet/garbage can, you would have thought I’d said only wimps like AK-47s. “Eat them? Why?” my translator spat in disgust.

“In France,” I offered, “ducks are a delicacy.”

“Not here,” he shuddered. “We need them alive.”

“If you don’t eat ducks, what good are they?”

“They keep the gutter water clean.”

What an atrociously unbalanced and unhygienic diet and American bombs don’t finish off, the triple Bs–bugs, benzene, and breathing–surely will.

For one thing, the nation’s bedding supports a thriving ecosystem of fleas, ticks, bedbugs, lice, and other assorted nasties–including everyone’s favorite bedtime companion, Mr. Scorpion. Neither warrior nor babe, not Osama himself, is safe from the contagion or the painful welts issued by the local critters.

After just one week, I counted 106 bites from Afghan bed fauna, many of them on body parts best left unblemished.

Furthermore, nights are almost always shockingly cold, and so are the days from November through May. Afghans heat their uninsulated adobe homes with Chinese-made camping lanterns fueled by eye-burning, lung-searing benzene. Every teeth-chattering minute offers you a terrible dilemma: freeze to death or poison yourself on low-grade Central Asian benzene.

Finally, there’s the dust. With a consistency like flour, it’s kicked up by anything and anyone moving across a 99 percent unpaved landscape. Consequently, everyone in Afghanistan suffers from smoker’s cough. I left Afghanistan days ago, yet I’m still ejecting prodigious balls of sandy phlegm.

Perhaps, against all odds, the world will witness the coming of a peaceful, prosperous society in Afghanistan. Maybe Afghans will routinely live well into their 50s. American civilization may bring running water, nay, even clean, fresh Evian, into every home.

But who’s going to take on the ferocious fleas I’m bringing home in my luggage?