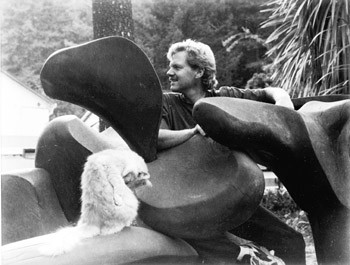 Call me Bruce: Timber Cove sculptor Bruce Johnson is immortalized in a 1995 photo by Genevieve Barnhart.

Artists turn on each other in new SMOVA exhibit

Every portrait that is painted with feeling is a portrait of the artist, not of the sitter,” wrote Oscar Wilde in The Picture of Dorian Gray. Assuming Wilde was right, what happens when the sitter also happens to be an artist?

“The world of art is small in general, and Sonoma County is small in particular,” explains Robert Berg, president of the SMOVA board of directors, who conceived the project and is co-curating the exhibit with SMOVA director Gay Shelton. “The artists showcased don’t all know each other, but there are many associations.”

Many of these relationships were formed in figure drawing classes at the Donkey Barn, which Shelton describes as “a funky old barn in rural Sebastopol.” Other connections were made in the art programs at Santa Rosa Junior College and Santa Rosa High School, or at the Graton Atelier, a former apple processing plant where many artists rent studios.

The 20-piece exhibit showcases ten artists and more than ten subjects. It features a mixture of photographs and paintings, including one print and one watercolor. Wall text describing each artist and subject explains how these friends, peers, mentors, and relatives became inspired by each other.

“When an artist sits for a portrait, they don’t have that vanity thing that you or I may have,” observes Shelton. “It’s not, ‘Am I beautiful?’ or ‘How do others see me?’ They totally get that it’s going to be an expression coming from the other artist.”

Berg notes that there are many different driving forces behind the pieces. “Each work is a sort of collaboration and a confrontation,” he says. “There are interesting dramatic dynamics associated with all of this work.”

Here is a selection of stories behind some of the pieces.

Tuning Up: Painter Claude Smith prepares to make art by playing the stand-up bass in this photo by Maureen Lomasney.

“The feedback from artists is [that] it’s very much like they’re performing,” says photographer Maureen Lomasney describing what it’s like to shoot fellow artists. “The process becomes a performance-art piece.”

Lomasney, 51, a Sebastopol resident who works in the Graton Atelier, an artist studio complex that she calls “an incubator for creativity,” has four pieces in the exhibit.

Rising to Olympus is a portrait of painter Wally Hedrick with his companion Catherine Conlin that Lomasney snapped at the end of a longer shoot and describes as “a God-like loving image.” Portrait of Claude Smith depicts visual artist and musician Smith playing stand-up bass, which he likes to do before painting as part of his artistic process. Lomasney photographed Portrait of Christiane Vincent when artist Vincent needed a standard portrait for one of her shows.

But performance art is most clearly evident in Lomasney’s fourth piece, Chocolate Meg. The work is a collection of photographic images of artist and MeSH gallery owner Meg Hitchcock at work. Lomasney scanned the images and used a desktop publishing program to create simulated film strips bordered with text.

The text tells the story of Lomasney’s experience of going down to Meg’s studio one hot day in 1999 and shooting her. Lomasney recalls it as an almost magical event.

Hitchcock stripped nude, stretched a canvas on the floor, and began to smear and drip Hershey’s chocolate syrup onto both the canvas and her body to create an abstract painting.

“The light was wonderful in the greenhouse that Meg was using as a studio,” recalls Lomasney. “She started the syrup on her face, applying it like suntan lotion.”

Lomasney shot two rolls of film with a hand-held camera in available light using a raid technique she likens to fashion photography.

“I was looking at her–the lines, shadows, the light playing on surfaces and what it does,” continues Lomasney. “The effect was light, active, and delightful. It was a fun shoot and very lively and quick, with two artists moving gracefully through tight quarters.”

However, Lomasney says, when she developed the prints they lost something in the translation. “They weren’t telling the story as I saw it,” she explains. So she printed the story within the piece itself.

This saucy tale has an unexpected end.

“When Meg was hot and sticky and out of syrup, she propped the canvas outside against a car to dry and went in to take a shower,” Lomasney remembers. “I patted Meg’s collie dog Annie on the head and left.”

But Lomasney’s photographs are all that remain from that magical day. After Lomasney left and while Hitchcock was in the shower, Annie licked the canvas clean.

When Sonoma County sculptor and jeweler Genevieve Barnhart goes to visit friends, she has a habit of bringing her camera. Equipped with her 35 mm Pentax or Mamiya 645 and her disarmingly easygoing smile, Barnhart has photographed fellow artists in Sonoma County for some 30 years.

Using an informal technique, Barnhart chats to the artist while clicking away, giving the impression that she is merely taking souvenir pictures. “I don’t try to get creative and artsy,” she says.

Barnhart personally knows or knew many of the most influential artists ever to work and live in the North Bay, having met most of them when she and her late husband, artist Raymond Barnhart, moved to Sonoma County from Kentucky in 1968. Back then, she says, local artists and art teachers were even more close-knit than they are now.

Barnhart’s photography, which captures both the personalities of the artists and the essence of their work, makes her studio a “storehouse of historic importance,” according to SMOVA exhibit organizers.

The exhibit features eight of Barnhart’s photographs, including a 1997 shot of mezzotint engraver and Santa Rosa Junior College instructor Holly Browning, and a shot of sculptor Bruce Johnson taken at Plantation Farms, a Sonoma County children’s camp that is the site of several of Johnson’s large outdoor redwood and copper sculptures.

The active Barnhart, just shy of 79 years old, is still a working sculptor and jeweler, living amid a Sebastopol apple orchard where she has her studio. Earlier this year she took on the demanding role of guest curator for “Passing the Gift,” an exhibition that featured works by nine deceased Sonoma County artists who all served as teachers and mentors.

Barnhart says using fellow artist as subjects is ultimately an easy and enjoyable exercise for her. “Because they’re my friends and I’m around them shooting, they’re relaxed,” she says. “I just try to capture them as I see them.”

Diane Knopf and Elfi Chester became friends in Los Angeles 25 years ago, and both moved with their respective families to Sonoma County in the 1990s.

Knopf, an Occidental artist, used her longtime friend as a subject. However, these are not just straight pictures of an artist posing or being caught at work. Knopf’s work captured her friend in a medical crisis. The two pieces in the SMOVA exhibit, A Moment to Feel and Surrender, depict Chester’s ongoing battle with breast cancer.

A Moment to Feel is a portrait of Chester painted from a photo taken by Robin Johnson after Elfi’s diagnosis of cancer and before her surgery. “Elfi wanted photos taken celebrating who she was before the surgery changed her forever,” explains Knopf.

Knopf interprets this photograph as having captured Chester’s introspection. “The eyes are looking inward rather than looking out. She is taking inventory,” Knopf says.

In Surrender, Knopf interprets that Chester has exhausted herself on a current of emotions. “The moment has come when she learns what children learn when they are playing in the ocean and get tumbled by a wave’” says Knopf. “The idea of ‘Don’t fight it, just ride it through.’ ”

Chester, who also has a portrait featured in the SMOVA exhibit, has had other bouts with the disease and is still fighting it. Speaking for her friend, Knopf says that when Chester is sick, it’s hard for her to look at the portraits, but on better days she feels empowered by them.

Knopf, 50, is grappling with her own health issues. She was born with Crohn’s disease, a digestive tract ailment. Knopf says that all through her life she had dealt with this chronic illness, and in one instant her friend taught her to embrace the lesson rather than fight the disease.

“I found myself much more accepting,” Knopf says. “There was no artist angst in this work, because there was a bigger reason for me doing it.

“There’s a purity in the work, and it has matured me as an artist,” Knopf continues, her voice catching. “Everything I say about Elfi I’m also saying about myself. It’s been a huge lesson for me.”

Father’s Day: Having his son draw his portrait was an eye-opening experience for Sonoma County artist Alan Azhderian.

Imagine yourself as a teenager drawing your own father’s face while he draws yours–and then imagine starkly comparing the results.

In some homes, the fallout from an experiment like that could be positively nuclear.

Not so in the case of Alan and Nathan Azhderian, both artists, who decided to experiment by drawing each other in one sitting.

The exercise happened two years ago when Nathan was 16 and enrolled in the Art Quest program at Santa Rosa High School. His dad, an accomplished artist and an instructor at Santa Rosa Junior College, was 53 at the time.

The two sat on either side of a table and rendered portraits, passing the same set of pastels back and forth. “We were taking turns–40 minutes, 40 minutes, and 10 minutes each to look again,” recalls Alan Azhderian.

“[Nathan] used fewer colors more intensely, and I used more colors, but the overall effect is less intense in terms of expression,” he adds. “Mine was reporting, his was more about expressing a feeling.”

Nathan’s portrait of his father explores extremities and makes use of rough strokes and bold blacks and whites. Alan’s portrait of Nathan concentrates on external features with softer graduations of color and tones.

Being a subject can be quite an eye opener for an artist. “Someone’s perception of who someone is doesn’t always jibe with one’s own perception,” Alan muses, reflecting on his son’s interpretation.

“The piece is pictorially interesting in terms of its color and metaphor, and interesting to see what he did in regard to me,” Alan continues. “I didn’t have any expectation, but I was pleased by the quality. But I don’t know that I necessarily connected it with myself.”

The elder Azhderian says the process was more important than the project: taking the time, sitting down, looking at each other intensely (something that’s normally considered taboo in this culture), and responding.

“The active process is really the important thing,” he says. “It’s a vehicle of communication rather than just a picture.”

He adds that other artists may appreciate different kinds of artistic departure more than a regular sitter would. “It’s like chefs cooking for other chefs,” he says. “The appreciation is about connoisseurship.”

Alan Azhderian and Nathan Azhderian will repeat the exercise when Nathan, who is currently studying art at the Cooper Union School of Art in New York City, comes home for the holidays. The pair will also co-teach a head and portrait demonstration class on Jan. 5 during the SMOVA exhibition.