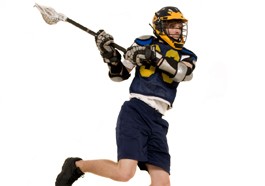 At a recent lacrosse match between two of the Petaluma Lacrosse Club’s varsity teams, Petaluma and Casa Grande, the sidelines are abuzz with people. One man shakes a cowbell vigorously. Parents from opposing teams heckle each other as the action blurs across the field. Teenagers do tricks with a device that looks like a hockey stick with a net on the end of it. Some kids practice flipping a rubber ball up in the air with their sticks, twirling their sticks a few rotations, then catching the ball in the net. Other kids find interesting ways to flip their sticks from one hand to the other.During a break, three small kids equipped with their own sticks scuttle across the field, flinging three small balls toward the general direction of one of the goals and laughing as they chase the balls across the field. During the next break, there are six kids out on the field. At the next break, there are 12, including one little girl with no stick and a smile who seems content simply following the action.

It’s as if the future lacrosse players of Sonoma County are multiplying before everyone’s eyes, which, fittingly, is what has been happening since Jamie Poore founded Sonoma County’s first organized club in 1994, the Santa Rosa Lacrosse Club (SRLC).

There wasn’t much interest around the county during SRLC’s first year. Recruiting enough players just to field a team was difficult. There were no games, and the club practiced a tentative two days a week.

“I was teaching at Slater Junior High at the time, and I would talk to my classes and bring [lacrosse] sticks out at lunch,” Poore says. “Kids would see [the sticks] and say, ‘What is that?’

“Up until four or five years ago, many people didn’t know what the sport was.” It’s a wonder why the oldest sport in the United States with so many facets and such a rich history took so long to surface in the North Bay. Lacrosse’s beginnings trace back to the Native Americans of northeastern North America who used it to resolve conflict, train warriors and as a religious ritual. The traditional version of lacrosse could include as many as a thousand people playing at one time on plains that would stretch the game for a couple of miles. Back then, the game was played from sunup to sundown.

However, lacrosse has changed dramatically since being introduced to Westerners by St. Jean de Brébeuf, a French Jesuit missionary who saw it being played by the Iroquois in 1636. Canadian dentist Dr. William George Beers, who founded the Montreal Lacrosse Club in 1856, was responsible for drastically shortening the length of each game and reducing the number of players on a team to 10. He also paved the way for lacrosse’s emergence in the United States; in 1877, New York University fielded the first college lacrosse team.

This season has been a turning point for Poore and SRLC’s varsity team. After going 1&–14 last year, the team went 11&–1 this season. The sudden turnaround has a lot to do with the experience and number of players on SRLC this year. After having only 20 players last season, interest has nearly tripled this season, as some 60 players have joined. And after having 10 first-year players in 2007, the SRLC varsity team only has two this season, with 17 experienced players.

“This year was definitely a larger peak than I expected,” Poore says. “I knew we’d be good, but this has really surprised me so far.”In 2001, two juniors at Rancho Cotate High School, Chris Oswald and Tyler Evje, started the Rancho Cotati Lacrosse Club (not associated with the high school). Oswald and Evje got together a group of kids and would head out to the field after school. They were in charge of their own equipment and uniforms. The goals were constructed in their parents’ garages and they lined the field with cans of paint. “It was hilarious,” Rancho Cotati Club president Chris Hansen says. “That really shows how important it was to them. You’re talking about kids who talk about cars and chasing girls.”By the time the Petaluma Lacrosse Club was founded in 2004, the Sonoma County lacrosse scene was ready to explode.

In just four years, the Petaluma Lacrosse Club has become Sonoma County’s largest. After starting with four teams and 100 players in 2004, PLC has grown to 16 teams and 320 players. “It just kind of snowballed,” says Ted Spores, who cofounded the club with Jill and Doug Olson. “It really got a quite a bit of momentum. Not only were we surprised with how much interest we had, but the rest of the league was surprised with how quickly our club grew.”There’s a lot to like about lacrosse. It offers the physicality football and hockey players enjoy. Players use agility and speed and move the ball around, much like soccer. They set screens and cut to the goal, much like basketball. And it’s a very fast-paced and high-scoring sport.

Also, almost anybody can make an impact on the field. A lot of the youth who have been responsible for the emergence of lacrosse in the county had never played a sport before lacrosse.”Kids of any athletic ability can play it and be successful,” Hansen says. “It’s a sport where, once you pick up a stick, your skill level and your ability can improve dramatically.”

And Hansen, Spores and Poore all agree that it is a team-oriented game. On offense, ball movement is key, as the defense’s ability to create contact and deflect a player’s shot with their bodies makes it difficult for one player to dominate. On defense, a goalie relies on his teammates more than most sports. Watch a game of lacrosse and you will notice that if a goalie finds himself one-on-one with an incoming offensive player, it’s generally bad news.As more players get involved and clubs grow larger, lacrosse is becoming more recognized and popular around the North Bay. One phrase sums it up lacrosse for Hansen. “Lacrosse for life,” he says. “Once you get involved in the game, it just gets a hold of you. It gets in your blood.”

To learn more about lacrosse in Napa, go to www.napalacrosse.com; in Sonoma, www.sonomalax.com; and in Marin, www.mcalsports.org/lacrosse.htm.