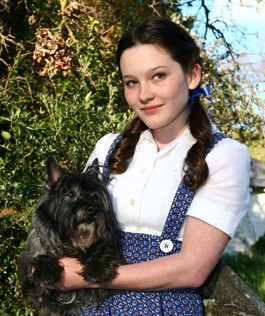 Zen and the art of playing the Tin Man

According to veteran stage director Jim Dunn, there’s a very odd phenomenon involving the casting of live productions of The Wizard of Oz, specifically regarding the role of the Tin Man. Currently putting the finishing touches on the 2008 Mountain Play’s lavish production of this musical fantasy, opening this weekend, Dunn has directed the play twice now (the last time was 17 years ago). Each time, he’s noticed the same thing.

“Most actors, during auditions of The Wizard of Oz, come in wanting to try out for the Scarecrow or the Cowardly Lion,” he says. “No one ever comes in wanting to be the Tin Man. When they are cast as the Tin Man, it always surprises them. I’ve seen that both times I’ve directed this, and I’ve heard it from other people. It’s not that no one wants to be the Tin Man; the Tin Man is a fantastic role. I think it’s that nobody sees themselves that way, because after all, the Tin Man is a very special, very beautiful person. He’s literally the heart of show.”

David Yen, the Rohnert Park actor who will be playing the “heart of the show,” confirms what Dunn has noticed.

“When I went to the auditions,” he laughs, “I was thinking of myself as the Scarecrow. That’s just more how I saw myself. Kind of goofy and floppy. But I’m not really dancer enough for that part, and in the initial audition, it quickly became apparent that I was not a dancer.” When Yen was called back for another round of auditions, being considered for the Tin Man, his reaction was typical. “I thought, ‘Wow, the Tin Man!” he recalls. “The Tin Man. I don’t know if I’m sweet enough for this role.”

Make no mistake. Among the great, imposing icon roles of the stage, from Hamlet to Stanley Kowalski to Ebenezer Scrooge, the Tin Man is every bit as intimidating a part to play. Dorothy and the Witch and the Scarecrow and Lion all have their iconic power, of course—it’s a show packed with indelible characters—but one could argue that the Tin Man is the hardest, most demanding role of the bunch, primarily because the chosen actor must reflect so many subtle shades at once. And in the setting of Mountain Play, a 4,000-seat amphitheater atop Marin’s magical Mt. Tamalpais, he must play all of that subtlety to an enormous audience. For Yen, whose last big part was playing Macbeth in a tiny chamber production at Santa Rosa’s Loading Zone Studio Theater, the switch to the mountain was a bit of a culture shock.

This Wizard will be a huge production, with a cast of 45 actors, spinning houses, major special effects and an airplane flying overhead on cue with a banner reading “Surrender Dorothy.”

“On the mountain, the closest person in the audience is 60 feet away,” Yen says. “I have to emanate kindness and sweetness and love and goodness—and I have to do it for 4,000 people. I have to be sweet—and big! That’s the challenge. There is an amazing amount of acting craft necessary to do this role, I’ve discovered, and I’ve had to develop other skills to perform in this space. It’s a fantastic experience. I’m having a really great time!”

For all this talk of the importance of the Tin Man, The Wizard of Oz of course features other beloved characters, and Dunn feels he’s assembled one of the best Oz casts he’s ever seen. The Cowardly Lion is played by Bruce Viera (last seen as Tevye in the Mountain Play’s production of Fiddler on the Roof a few years ago), and the Scarecrow is played by Eric Batz, who played the part of Woof in last year’s Hair.

“They’re all terrific,” Dunn says. “I always look for a strong ensemble, for actors who can play off of each other well. In The Wizard of Oz, there has to be chemistry between the characters. I was fortunate to have found actors with lots of chemistry—and lots of heart.”

David Templeton
Previous articleMedia Moments: The P.D. and the KRSH
Next articleHooray for Us!
10,691FansLike
7,300FollowersFollow