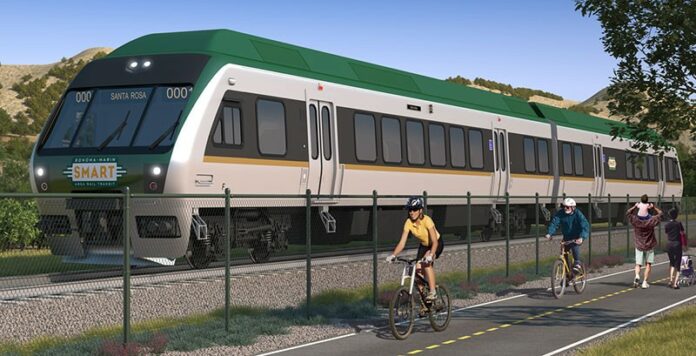 Best Idea from the Past Awaiting Us in the Future

In a world where greenhouse gases are melting the ice caps, and nothing, not even “three lanes all the way,” can save you from a commute-hour headache—a train is coming. One bike path, somehow, finally got built. Clip on your shoes, fasten your helmet, and get ready for the ride of your life. The past is now what the future has in store.

That trailer pitch just never gets old, just like the use of flying cars in movies set in the “not too distant future” never gets old. In the real 21st century, however, we’re perfectly happy to get some inter-urban light rail, the kind of transportation we had in 1914—not to mention a bike path alongside it. Who would have thought, back when 2014 was Tomorrowland’s rocket-powered promise, it’d be so gosh-darn hard to get a bike path built?

In 2008, voters in Sonoma and Marin County approved a sales tax measure to fund construction of passenger rail service and a bicycle and pedestrian pathway along a 70-mile corridor from Cloverdale to Larkspur. Stymied in part by the Great Recession, the Sonoma Marin Area Rail Transit (SMART) District got rolling slowly. Then, one day in Santa Rosa, workers appeared. Ditches were dug, a gravel roadbed laid, and machines smoothed a nice, flat path of asphalt. A safety fence went up along the tracks. Today, in this marvelous age of technology, a cyclist can start at College Avenue and not have to get back on city streets until Eighth Street, a full two blocks later.

The College-to-Eighth segment was built by the city of Santa Rosa, with the help of federal highway funds that SMART had matched. What’s holding up the next two blocks from Eighth to Sixth, explains SMART pathway manager Paul Klassen, is the rigmarole of a right-of-way acquisition that would have been especially time-consuming and costly if those same federal funds had been involved in the process. But the next two blocks will be built, Klassen says, as well as six more discontinuous segments between Highway 12 and the Marin Civic Center that were approved last year, using Measure Q funding.

Unlike the existing railroad tracks, the adjacent strip of land is not a continuously available right of way, and the bicycle and pedestrian path will not be one straight shot to the Bay—in some areas, the “path” will be diverted onto city
streets. Building it will be a slog, block after block, one review, agency and funding source after another. So get ready, because it’s coming, soon—well, probably in the latter half of 2016. For the most part. www.sonomamarintrain.org.—J.K.

When gas becomes too expensive and cars congest the roadways in this country, as they now do in China and India, bicycles will become the preferred method of transportation. Instead of gas stations, we will have bike repair stations, taking up just a few square feet or so on a sidewalk. There, one can pump up a tire, adjust brakes, tighten handlebars and perform basic functions to keep one’s vehicle on the road—or at least to the right side of it, with three feet of space from auto traffic, of course.

Ahead of the curve on this is Santa Rosa’s Trek bicycle store, which has installed such a repair station outside its downtown shop. Owner Bret Gave found the product and immediately took it upon himself to buy it and install it for any cyclist to use, 24/7. “It pretty much has everything you need for on-the-spot repair,” says Trek employee Phil Scheidler. “We have people nearly every day compliment us on it.”

The idea is catching on—other businesses have already asked Trek to help them install one for their employees or customers in other areas of town. At about $1,000 per unit, it’s a lot cheaper than a gas station—and you won’t get charged $1 for air. 512 Mendocino Ave., Santa Rosa. 707.546.8735.—N.G.

Whether it’s backpacking along the Marin Headlands, hiking amid majestic redwoods or kayaking the Napa River, there’s no shortage of amazing natural wonder in our local landscape. If the idea of roughing it in Mother Nature’s splendor is at all daunting, it’s easily doable with the right app. That’s right, there’s finally a reason to take a Smartphone on the trail. Looking for the nearest outdoor adventure? ParksNReviews (free) will seek out the closet park based on location. Afraid of getting lost while wandering the countryside? MotionX GPS (99 cents) shows real-time positions on a detailed map and leads the way back like a digital trail of breadcrumbs. More into cycling? Strava Cycling (free) finds trails and also logs distance and speeds, showing off other riders’ times, to keep it interesting. For the hardcore outdoorsman, there’s always the U.S. Army Survival Guide ($1.99), the most thorough outdoor survival app available, with chapters on any situation imaginable.—C.S.

Geyserville’s Hope-Merrill House harks back to an earlier time. A time of intricate craftsmanship, a time of walls plastered with mind-bendingly flowery wallpaper, a time of doilies and gewgaws, a time of stuffed peacocks. But when it comes to lighting up the dark corners of this amply furnished Victorian-era bed and breakfast, it’s not whale oil that makes it go—Hope Merrill House is powered by the latest in solar technology. In the North Bay, the image-conscious hospitality and wine industries have been among the most visible adopters of solar energy, which is expensive to install. But already, the Hope Merrill is getting 95 percent of its electricity from the solar array, says proprietor Cosette Scheiber. And in the Napa Valley, you can’t throw a bottle of cult Cabernet without hitting a winery’s solar panel array, if you put some arm into it. According to figures from Go Solar California, in megawatts per capita in the California Solar Initiative program, Sonoma County rates are four times as high as Los Angeles County. Will it make a difference? Well, did the automobile make a difference? After all, it was only highly capitalized folks who could
first afford to putter down dirt roads, white scarves flying in
the wind, scaring the horses. 21253 Geyserville Ave., Geyserville. 707.857.3356. www.hope-inns.com.—J.K.

Petaluma residents are contributing to a greener future in more ways than one when they, ahem, evacuate their bowels. Wastewater (that is, raw sewage) from city pipes flows to the Ellis Creek Water Recycling Facility on Lakeview Highway east of the city, where it undergoes an amazing transformation. After passing through several levels of treatment, the wastewater is pumped into 30 acres of “polishing ponds,” man-made reservoirs that hold water clean enough to be home to a thriving wetland habitat for myriad species of birds and eight threatened and endangered species, such as the salt marsh harvest mouse. Through a process called co-generation, methane gas produced in the treatment process fuels the sewer plant’s boiler, reducing energy costs and carbon emission. Taking a stroll around wastewater ponds might not sound like a good time, but a trip to the Ellis Creek ponds and surrounding wetlands will change your mind. It’s beautiful. There are four miles of trails and a path that leads to Shollenberger Park, another wetland wonderland. Wetlands offer wildlife habitat, a buffer against storms and a natural water-processing facility by filtering and cleaning the water that flows into it. The Ellis Creek facility has become a national model because of its use of technology, and also because of the way it mimics natural systems. Think on that next time you flush in Petaluma.—S.H.

Best Fashion Fantasy We Never Thought Would Become a Reality

‘Power Laces!’ exclaims time-traveling teenager Marty McFly, slipping on a silver pair of Nike sneakers and letting the shoe fit itself snuggly over his foot. As it appeared in the 1987 smash sequel, Back to the Future II, and set in the then-distant future of 2015, these smart shoes have been a constant source of nerd wonderment, like the hover board and flying cars also imagined in the film. Now, in the best possible “life imitating art” scenario, Nike designer Tinker Hatfield recently announced that Power Laces will be a reality in a year’s time. Shoe nerds everywhere might as well start saving up now, because chances are the self-tightening laces will cost an arm and a leg—which is OK, as long as they don’t include the foot on that leg.—C.S.

Huey Speaks for the Trees