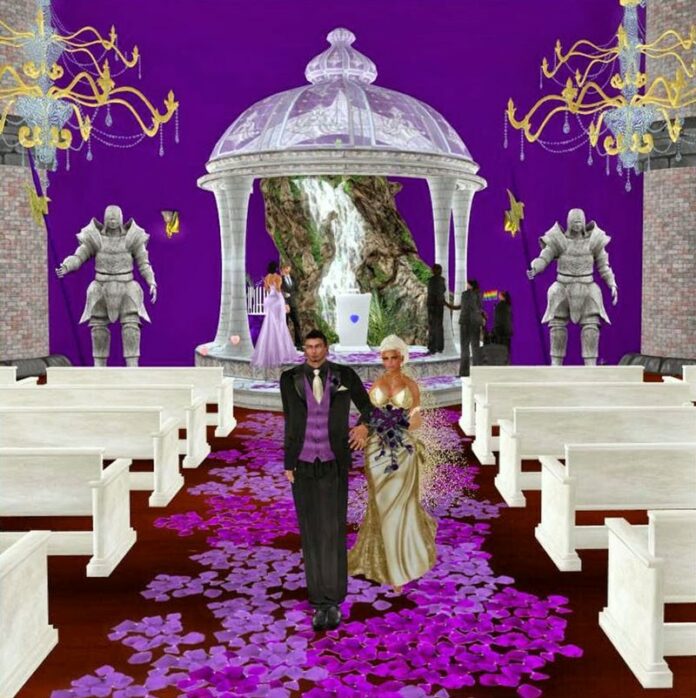 Best Wedding Everyone Can Attend in Their Underwear

Imagine an online world (turn away now if you’re already lost) that’s part Sims, part Minecraft
and part real, human existence. Founded and headquartered in San Francisco, Second Life is a global online game that allows users to create avatars and live in a user-created digital world. Now in its 10th year, Second Life gets an average of 400,000 new registrations each month, according to the game’s website, with 36 million accounts created in its history (though some estimates put the actual number of users at about 1 million). In this fantasy world, users can exist without society’s slings and arrows (or gravity, for that matter, since Second Life avatars have the ability to fly). Currency exists as Linden dollars, which have a current exchange rate with real dollars at about 250 to 1. They can also be earned in the game just like they would in life: by working, selling goods or paying for a premium account that refreshes your Linden dollar stash each week.

Why would one desire an alternate life? Well, companionship, for one. It’s easier to meet people online these days, and over 41 million have tried online dating. But even then, there’s the awkward real-life meeting, and maybe it turns out he hasn’t been 28 years old for a while or maybe her laugh makes Fran Drescher sound angelic. In SL, avatars are user-generated idyllic versions of their creators; everyone is beautiful, so personality becomes the only compatibility test. For $L10, users can officially “partner” with another user—though, as in real life, separation costs more ($L25).

But there are some twists, as one might imagine, to this alternate universe.

For starters, SL relationships sometimes exist simultaneously with RL (real-life) relationships. This can cause problems with RL couples, though sometimes one type of relationship can lead to the other. And forget seeing your sweetheart during a power or internet outage. There have been reports, as well, of NSA agents creating online personae in games like Second Life to infiltrate potential terrorist organizations. Without a face-to-face meeting, who’s to say if
the blushing bride isn’t really Agent Smith from The Matrix?

But the positives are wonderful. Four hours of SL time equates to one hour of RL time, so relationships tend to bloom faster on the screen than in person. And when the wedding takes place, everyone looks fantastic, the weather is impossibly gorgeous and floating hearts emanate from a grand piano played by the bride and groom on a tropical beach. People do spend money on this, and there are a handful of wedding services available in the SL marketplace. But the cost is nowhere near the $28,000 average for an American wedding. After marriage comes babies (seriously, there are videos of SL births), and after that, who knows. Here’s to love, both in the physical and digital realms.—N.G.

For the record, the best celebrity to have walked the sidewalks of Railroad Square in Santa Rosa is, and will always be, Steve Martin. But this year, the cozy, downtown shopping district seemed to have transformed into a haven for celebrity couples out for sweet afternoon dates. In late November, Renee Zellweger shopped for trinkets with her boyfriend, musician Doyle Bramhall, at Whistlestop Antiques after attending a KRSH radio station party the day before (Bramhall performed live). But in even more exciting news for rabid Parks and Recreation fans out there, Nick Offerman (better known as Ron Swanson, the meat-loving, woodworking, Libertarian county employee on the Amy Poehler–helmed show) and his wife, the equally talented and hilarious Megan Mullally (Will and Grace, Party Down), were spotted shopping at Skirt Chaser vintage. They graciously agreed to a photo with a friend of mine, who happened to stop by the store at the same time, and her Instagram feed blew up with comments like “Oh my god. Ron Swanson!” If this trend continues, I may need to start running a romantic celebrity date star map tour that starts and ends on Fourth Street.—L.C.

There is a place in Petaluma where a group of adults gather once a week to talk dirty. They do it in a well-lit room, they do it fully clothed, and they do it in front of each other. This isn’t 900- number material; it’s intimacy therapy. The group goes by “O,” and is part attitude adjustment, part playful distraction. Professional life coach Elizabeth Wolfe facilitates the sex-positive conversations in a safe environment. Sessions consist of three games, played each week, to the tune of participants’ prowess. The games are a psychological framework for breaking down taboos about sex while practicing vulnerability. Risqué questions and words of desire fly about even as people blush and squirm. “I encourage people to play hard, to speak the first answer that comes to mind and not to filter,” says Wolf. “You never know, if you say something kind of edgy, it may free your neighbor to do the same!” Check it out. You may come out feeling a little more kinky than usual. eSensum.com.—J.O.

Best Rooftop Graffiti (From the Future?)

I should have done it a long time ago, when you first walked away. All you wanted was to know that I loved you. And of course I did. I still do. And I never forgot you. I never stopped regretting my silence. And I never forgot the metal roof glimmering in the sunshine across the parking lot in downtown Santa Rosa where we stood when you said goodbye. When I first discovered the time vortex last year, and realized I could only use it once, I knew I had to go back to that day, that moment, and tell you how I felt. It took me till now to figure out how. I haven’t tagged a building in decades. We don’t do it like that in 2067. But I knew I couldn’t walk up to you, the young us and say, “Hey, I’m you from the future! Tell her how you feel! Tell her you love her, and will never stop loving her!” We’d both be terrified. So instead, I wrote it down for you. There on the roof of that abandoned building. In great big letters. “I STILL LOVE YOU.” It may be too late to matter, too late to change the future. But maybe it’s not. Maybe you’ll walk by that lot, see those words, and somehow know they’re not just the random ravings of a daredevil artist. They’re from the future. They’re from me. I still love you. If you still feel the same way, leave me a message. I’ll find a way back. I’ll find the message. Then I’ll find you. And I’ll never stop telling you. I love you. I love you. I love you.—D.T.

Leilani Clark
Previous articleBottlerock Lineup Announced—Welcome Back to the ’90s!
Next articleMarch 23: The Straits at Sweetwater Music Hall