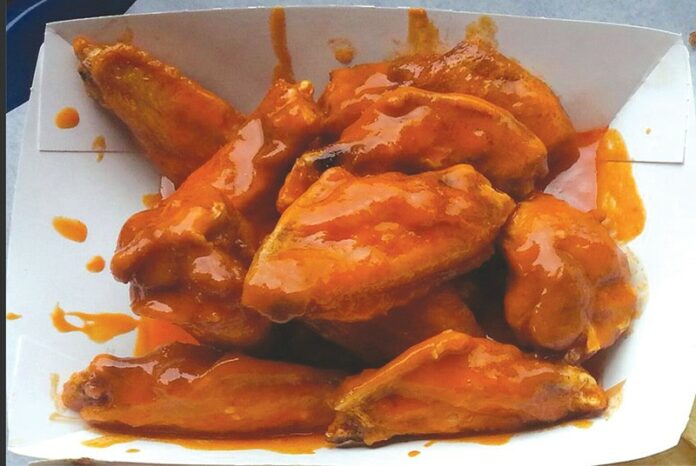 Things to think about while eating Buffalo wings

There’s a tangy waft in the air! We are in Petaluma at Original Buffalo Wings for a half-dozen in the white box, and another half-dozen observations, to go:

1. Um, don’t ever eat Buffalo wings while driving. The sauce will spray all over the dashboard, and you will be tempted to throw bones at pedestrians as you crunch celery under the influence of Bitches Brew.

2. It’s not “traditional” to serve celery with wings, despite the claims of OBW—who are, in fairness, hardly alone in this grievous miscalculation. It is traditional to serve celery and carrots with them (and blue cheese, of course).

3. Don’t ever snort the cocaine while making the hot sauce. I’m not sayin’ the youngsters at OBW are doing that—I’m just sayin’. I once worked for a guy at a pizza-and-wings joint who snorted a few lines and then put cayenne-tinged finger to nose. He was subsequently hospitalized with palpitations.

4. I’m not sayin’ the potholes in Petaluma are so massive you could host a four-bucket wing-ding in them and still have room for a couple of those OBW salads and a cheesesteak sandwich—I’m just sayin’.

5. Say no to cocaine, but say yes to the recipe for hot sauce that emerged from the Anchor Bar in Buffalo. Key ingredient: butter.

6. The wings at OBW are tasty and satisfying.