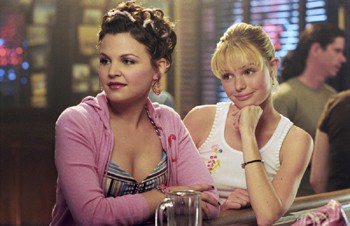 ‘Win a Date with Tad Hamilton’

Attitude Platitudes: Kathryn Hahn (not pictured) is the weary bartender and Kate Bosworth (right, with Ginnifer Goodwin) is the dewy ingenue in ‘Tad Hamilton.’

“It’s one of the best movies about human nature I’ve ever seen in my life,” exclaims Sherry Argov. “It’s about learning who’s going to propel you forward in life and who isn’t. I love this movie!”

Argov, a Los Angeles-based writer, relationship expert and talk-show darling, is the author of the bestselling book Why Men Love Bitches and its forthcoming sequel, Why Men Marry Bitches. We have connected via telephone to discuss the recently released romantic comedy Win a Date with Tad Hamilton.

Unfortunately, that’s not the film she’s just been talking about. That would be Seabiscuit, the Oscar-nominated horse-racing drama for which she has nothing but kind words. As for Tad Hamilton, the words she comes up with are not so kind, being words like “boring,” “stupid,” “ridiculous” and, ahem, “bullcrap.”

This is the kind of movie in which the characters constantly stop the action to swap pithy maxims. Apparently, no one in the little town of Frazier’s Bottom, W.Va., where the film is set, ever engages in actual conversation. Instead, people rattle off slogans like overcaffeinated booth workers at a bumper-sticker convention.

“What total bullcrap,” Argov remarks. “Either you love someone or you don’t. There are no degrees and levels to love, no ‘I love you but I’m not in love with you.’ When you’re in love, you don’t waffle. Period. End of story. If someone is separating love into different little categories, making distinctions between, you know, love with a cherry on top and love with, I don’t know, a cherry and whipped cream, then that’s not love. And if you think it is, you’re being duped.”

In the movie, that “three kinds of love” speech is delivered by Angelica the tattooed bartender (Kathryn Hahn), who openly lusts after brainy grocery-store manager Pete (Topher Grace), who secretly longs for pretty check-out girl Rosie (Kate Bosworth), who’s a big fan of fatuous Hollywood hunk Tad Hamilton (Josh Duhamel), who offers himself up as a fundraising prize and is promptly won by none other than Rosie.

Complications ensue as Pete and Tad compete for Rosie’s affections, with Angelica appearing every now and then to flex her tattoos and recite more proverbs: “If you feel something and you don’t do everything in your power to make it happen, it’s slapping life in the face” or “Once a man closes the door on you, it’s shut, nailed, cemented, boarded up forever.”

“More bullcrap!” laughs Argov. “Spoken just like a woman who doesn’t have a man.”

Hmmm. At this point, one might have to say Argov was being somewhat . . . bitchy. She’d be the last to deny it.

“To me, the word ‘bitch’ is a positive thing,” she explains. “I never mean it in a pejorative way, because I don’t think there’s anything wrong with a woman sticking up for herself. I don’t think there’s anything wrong with having a voice or being a confident person. In my view, a bitch isn’t a woman who steps on other people; she’s a woman who won’t allow herself to be stepped on by others.”

By that measure, it’s good-natured Rosie–though scripted as a nice, sweet girl-next-door–who turns out to be the best example in Tad Hamilton of an Argovian bitch

“She isn’t easily manipulated,” Argov allows. “She’s an independent thinker. She looks at a person’s soul and intentions, not just at their promo package. And though she thinks about giving the movie star some booty, she’s too smart for that. She knows that to him, she’s just another toy, and a bitch isn’t willing to just be anyone’s property–even if it’s the property of a king.”

Asked whether she approves of the movie’s ending, in which (yes, it’s true) one of the two men does end up gaining access to Rosie’s booty, Argov stands her ground.

“Neither of them deserves her,” she snaps.