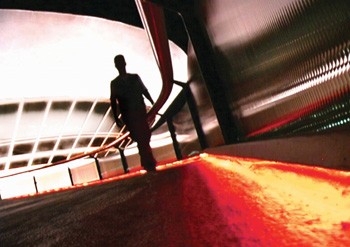 Walk on By: What if extraterrestrial beings regularly visited our planet? Would that explain tales of fairies and ghouls?

Documentary explores human side of meetings from beyond

Karin, an attractive woman in her late 20s with short-cropped hair and a quick smile, is fairly certain that her first experience with extraterrestrial beings came when she was just two and a half. Playing with a new gumball machine in a dry creek bed outside of her Florida home, Karin remembers a small being with large, black eyes coming out from behind a tree. He asked her to accompany him; she did. She remembers that they entered an “egg-shaped” vehicle.

The being introduced her to a boy slightly older than she and asked if she would share her gumball machine with him. She did. The next thing she knew, she was “mid-frame, running towards the house.” She and her mother hunted all around the creek bed for that gumball machine. They never found it, though over 20 years later, Karin found the young boy whom she believes was in the egg-shaped vehicle with her, now a man living in his native Scotland.

As an adult, Karin has frequently been awakened by an intense feeling of electric current coursing through her slim frame. She’s seen an eerie blue light, an unnatural screaming hue, repeatedly illuminate her bedroom windows. She’s been aroused from deep slumber only to find herself completely unable to move. She is certain that her ovaries have been pierced, eggs removed. She believes that she’s met her half-alien children, small “young beings” who are also tinged an uncanny blue. She cries as she says this. She appears to be perfectly sane.

Karin is one of the estimated hundreds of thousands of people who claim to have experienced alien abduction. As featured in filmmaker Laurel Chiten’s latest documentary, Touched, Karin is just one of a handful willing to tell her story. Startled by such remarkable tales, most of us tend to scoff at them. When a Harvard professor of psychiatry gravely researches them as being true, opinions sometimes change.

Dr. John E. Mack is one such psychiatrist. The Pulitzer Prize-winning author of a biography on T. E. Lawrence, Mack has devoted the last decade to working with subjects who believe that they have been abducted, writing about them (resulting in at least two nonfiction works, Abduction and Passport to the Cosmos) and defending himself for his research against colleagues at Harvard, who launched a two-year investigation of his work before finally exonerating him as worthy of his tenure.

Mack invited Chiten, whose work he was familiar with from her earlier documentaries (Twitch and Shout, about Tourette’s syndrome, and The Jew in the Lotus, an autobiographical study), to make a film about his patients and their experiences. She resisted until he dangled a free meal. Arriving for a dinner in honor of Mack’s clients, many of whom spoke at eloquent length of their experiences, Chiten became struck by the simple force of each person’s humanity. These weren’t raving lunatics, but rather ordinary people whose lives had unwillingly, it seems, been irrevocably changed.

“I was abducted by John Mack,” she laughs by cellphone, caught having a Saturday morning breakfast at a cafe near her Boston home. “I basically kicked and screamed and dragged my heels in. But there’s something about John that’s so completely endearing; he’s so naïve. He does this work and publicizes it, and then doesn’t understand what the big brouhaha is. He’s actually quite fascinating to listen to.”

Those interested can listen to Mack on Saturday, Feb. 21, when he and Chiten appear at the Sonoma Film Institute’s screening of Touched (Chiten also appears on Sunday, Feb. 22).

Touched focuses primarily on Karin and another alleged abductee named Peter, who believes that he was used as a sperm resource while in his 20s for alien half-breed production. Peter, a handsome man who trains as an acupuncturist during the course of the film, is married to the long-suffering Jamy, a therapist.

We hear tapes of Peter’s regression therapy with Mack, in which he reports feeling that the alien with whom he believes he has repeatedly mated is his real wife, his real soul partner in life. For her part, Jamy tries to see Peter’s experiences as authentic, as possibly springing from an episode of childhood abuse, or as a spiritual quest. She strives not to write her husband of 17 years off as a nut case, though the strain certainly shows.

Remaining skeptical, Chiten trained her lens on the human aspect of this underground drama. “I am someone who is completely outside the experience,” she says. “Jamy is me; she’s the audience. I think that the major thing that I wanted people to walk away from the film with is that it is purposefully ambivalent [about the subject of alien visitation], because I am. I’m agnostic about it. It’s real; it’s not real. I believe them; I don’t believe them. You’re never quite sure. But it’s not really just about alien abduction per se; it’s about the human drama, what happens when something comes into your life.”

Given that both Karin and Peter are attractive, outgoing people, one begins to wonder if they’ve sought publicity in order to somehow enlarge themselves. Chiten disagrees. “A lot of people will think that these people are trying to get attention. Peter was very hesitant to be in the film. Having these experiences is traumatic enough, but how the media has treated him is much more traumatic. He’s been so misinterpreted by the media so many times. My feeling is that he was being very courageous by coming forward. Most people are shy about it; they don’t want people to know.”

Perhaps most brilliantly, Chiten interviews thinkers outside of Mack’s field, speaking to the Vatican’s own demonologist and to a myth and folklore expert whose specific discipline is daimonology. Speaking in Italian through an interpreter, the Vatican priest reveals that the Catholic Church is heartily ready to embrace the idea of alien visitation. Explaining that the fallible art of human narrative forms the basis of our shared history and certainly of the Christ tale itself, the elderly priest leans forward in his chair and says, “Who are we to believe that we are the only life in the universe? It’s stupid,” his voice trailing the translator: “stupido.”

As Mack patiently explains earlier in Touched, Westerners have the only culture in the world that doesn’t readily accept the duality of an alternative existence to the human one. “The alien-encounter experience seems almost like an outreach program from the cosmos to the spiritually impaired,” he marvels.

Ghosts, goblins, fairies; ghouls, gargoyles, brownies; little people, giants, elves–what if, the daimonologist posits, the parallel world of traditional Western legend in fact painted a rich and vibrant ancient history of interaction between ourselves and beings from beyond?

“As much as I love to think that there are such things as angels and gods, I don’t want to think that there’s something in this world that can hurt people,” Chiten says. “It makes me feel out of control. But in the four to five years I’ve been working with this subject matter, no one has been made any sense to me–except the daimonologist.